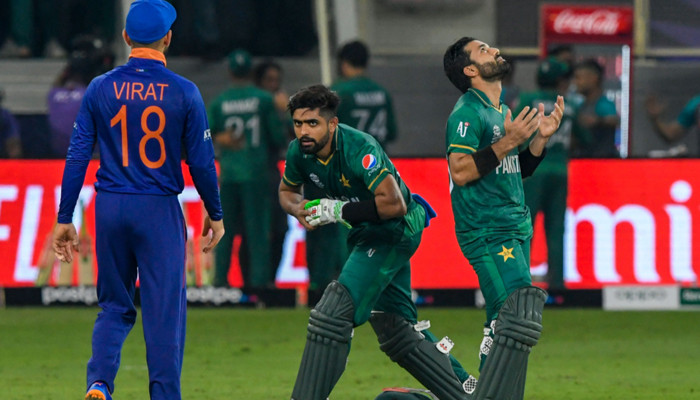 The encounter is now the most viewed T20I match in history, exceeding the previous high of the India-West Indies semi-final match from the 2016 edition of the ICC event held in India, the ICC said in a statement on Thursday.

In the October 24 clash, Captain Babar Azam and Mohammad Rizwan had smashed unbeaten half-centuries to help Pakistan crush India by 10 wickets and register their first win over their arch-rivals in any World Cup.

The ICC revealed that nearly 10,000 hours of live coverage — more than ever before — are offered across TV and digital platforms in 200 countries at the back of increased viewership and consumption in India, Pakistan, the UK, Australia, and the USA.

“The pinnacle of the shortest format of the sport offered explosive cricket and entertainment for everyone and featured cricket’s biggest names and best teams,” the statement said.

The overall TV consumption for the full tournament in India was recorded at 112 billion minutes, despite India’s early exit from the tournament, the statement said.

Viewership share amidst younger audiences in India — children below the age of 15 — was at a healthy 18.5% at the back of a highly successful marketing campaign “Live the Game” targeting a younger demographic, the ICC said.

In the UK, viewership for India vs Pakistan match grew by 60% on Sky UK whereas the overall viewership for the market went up by 7%. In Pakistan, the viewership grew by 7.3% compared to the 2016 edition of the event.

In Australia, the viewership increased by 175% on the Fox Network. In the USA, which the ICC recently named as one of the focus markets for the sport, the tournament was the most viewed cricket tournament ever on ESPN+.