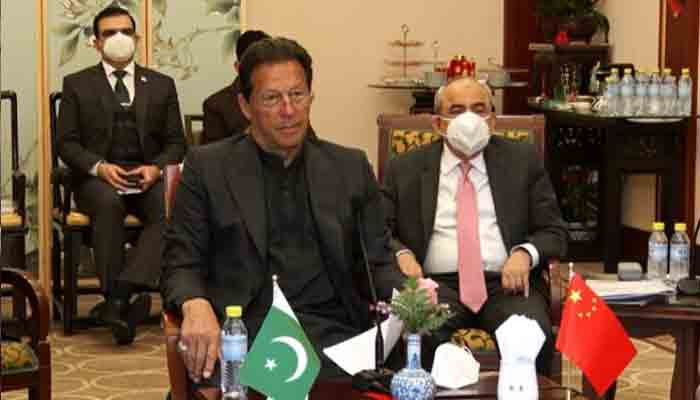 BEIJING: Prime Minister Imran Khan, who is on a four-day visit to China, cited India’s aggressive behaviour and the prevailing Hindutva ideology as a threat to regional peace and a cause of lingering instability of the region.

The premier’s remarks came in an exclusive session with the heads and representatives of leading Chinese think tanks, universities and the Pakistan Study Centre in Beijing.

PM Imran said that the present Indian regime is causing long-lasting instability in the region. “The atrocities of India are continuing in Indian-Occupied Kashmir (IoK). The world should pay attention to the ongoing atrocities of India against Kashmiris,” he maintained.

He also thanked China for its unwavering support to the IoK dispute, emphasising the importance of Pak-China relations and ensuring regional stability and prosperity.

“In view of myriad global challenges, the world did not need another Cold War. Divisions could result in mounting sufferings and prevent common benefits. Pakistan was, therefore, of the belief that the key driver in international politics should be cooperation, rather than confrontation,” he said.

He recalled that Pakistan in the past had played a role in building bridges and remained ready to do so again.

Referring to Pakistan’s National Security Policy, the prime minister stressed that his government put economic security at its core. This vision is built upon connectivity and development partnership for which China remains an indispensable partner for Pakistan, he added.

The importance of Sino-Pak relations in ensuring regional stability and prosperity was also discussed during the meeting.

He emphasised that while Phase-I of the CPEC was focused on infrastructure development and connectivity, the next phase would focus on industrialisation, cooperation in information technology and agricultural transformation.

The prime minister highlighted that Pakistan was offering incentives for investment that were at par with or better than other investment destinations.

Discussing the regional dynamics, the premier said that he believed that it was in the mutual interest of Pakistan and China to cooperate in ensuring peace and security in Afghanistan.

He called on the international community that Afghans were not left alone in this time of need. He underlined the importance of Pakistan and China working with Afghanistan to advance shared objectives of peace, development and connectivity.

He further said that cooperation ensuring peace and security in Afghanistan is in the mutual interest of Pakistan and China. The international community should not leave Afghans alone in this difficult time, he emphasised.