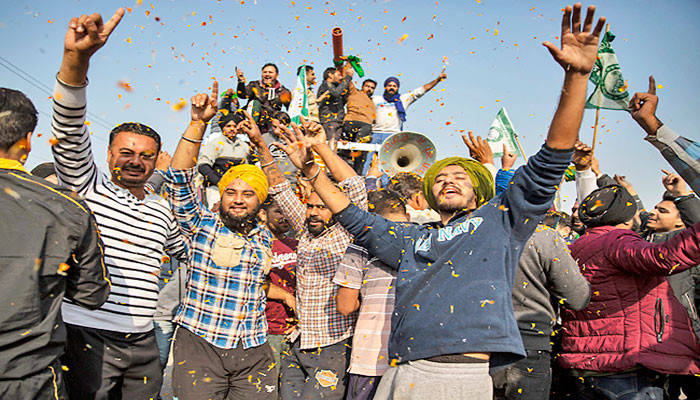 NEW DELHI: Thousands of Indian farmers packed their belongings and dismantled tent cities on the outskirts of Delhi Saturday as they headed home following a year-long protest against the government´s agriculture policies.

Hundreds of farmers danced and celebrated the victory early Saturday as they began removing roadblocks and dismantling thousands of makeshift homes along major highways. They lit firecrackers, hugged each other and distributed sweets as blaring loudspeakers played patriotic and revolutionary songs dedicated to the agitation.

At Singhu, one of the protest sites, long queues of lorries and tractors packed the highway heading north into their home states of Haryana and Punjab. Farmers in India have political heft due to their sheer numbers — tens of thousands had camped out since November 2020 to protest against the laws in the biggest challenge to the Modi government since it came to power in 2014.

“We were determined to protest as long as it had taken. But all of us are happy that the government accepted our demands and we are going back to our homes,” Sativinder Singh, one of the Singhu protesters, said. “It is a big day for the farmers as we can peacefully go back to our homes,” he said.

Protesters had initially refused to leave the sites despite the repeal of the legislation, pressing other demands including a legal guarantee for minimum benchmark rates for their produce.

Some Indian states and central government set minimum prices for crops every year but farmers have long demanded a law to ensure income stability.

The government said it will form a commission on fixing minimum crop prices and promised to stop prosecuting farmers for burning stubble that is blamed for polluting Delhi´s air every winter. It also agreed to pay compensation to the families of more than 700 farmers who died during the demonstrations and withdraw criminal cases lodged against protesters during the year-long campaign.

The three agricultural laws passed in September 2020 aimed to deregulate farm produce markets from state control and allow private companies to enter the sector — on which two-thirds of India´s more than 1.3 billion population rely for a living.

The government said the laws were a necessary reform but farmers opposed the move, saying it would leave them at the mercy of big corporations. “Government should now ensure that they fulfil the promises made to us,” Baljot Bawja, a protester at Ghazipur, said. “We don´t intend to come back but if government goes back on its promises, we will be compelled to launch another protest,” he said.

The protests remained largely peaceful, with occasional bouts of violence, including during a tractor rally in January on Indian Republic Day.

Analysts say Modi´s retreat on the laws came over fears growing discontent among large sections of the rural population and the stalemate at the Delhi borders were hurting its electoral prospectus.