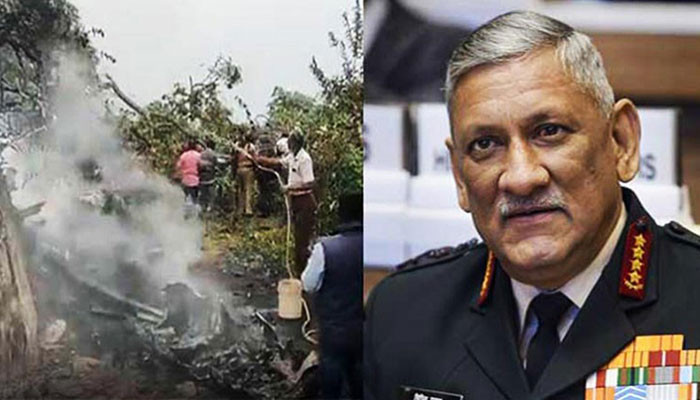 COONOOR: Indian defence chief General Bipin Rawat and 12 other people were killed in a helicopter crash on Wednesday, with one survivor being treated for his injuries. Rawat was India’s first chief of defence staff, a position that the government established in 2019, and was seen as close to Prime Minister Narendra Modi.

The 63-year-old was travelling with his wife and other senior officers in the Russian-made Mi-17 chopper, which crashed near its destination in southern Tamil Nadu state. “His untimely death is an irreparable loss to our Armed Forces and the country,” defence minister Rajnath Singh said on Twitter.

Footage from the scene showed a crowd of people trying to extinguish the fiery wreck with water buckets while a group of soldiers carried one of the passengers away on an improvised stretcher.

”Rawat was headed to the Defence Services Staff College (DSSC) to address students and faculty from the nearby Sulur air force base in Coimbatore.The chopper was already making its descent at the time of the crash.

It came down around 10 kilometres (six miles) from the nearest main road, forcing emergency workers to trek to the accident site, a fire official told AFP. The sole survivor of the crash, a captain working at the DSSC, was being treated for his injuries at a nearby military hospital, the air force said.

Indian foreign minister Subrahmanyam Jaishankar said he was “deeply shocked” by the accident and Rawat´s death.

“We worked closely together in the last few years. It is a huge loss to the nation,” he said. Rawat came from a military family with several generations having served in the Indian armed forces.

The general joined the army as a second lieutenant in 1978 and had four decades of service behind him, having commanded forces in the Indian Illegally Occupied Kashmir (IIOJ&K) and along the Line of Actual Control bordering China.

He was credited with reducing insurgency on India´s northeastern frontier and supervised a cross-border counter-insurgency operation into neighbouring Myanmar.

Rawat was chief of the 1.3 million-strong army from 2017 to 2019 before his elevation to defence services chief, which analysts said was to improve integration between the army, navy and air force.

He was considered close to the Narendra Modi-led central government and turned heads last month when he reportedly made an approving reference to “lynching terrorists” in the IIOJ&K.

The Mi-17 helicopter, which first entered service in the 1970s and is in wide use by defence services around the world, has been involved in a number of accidents over the years. Fourteen people died in a crash last month when an Azerbaijani military Mi-17 chopper went down during a training flight.

In 2019, four Indonesian soldiers were killed and five others wounded in central Java in another training accident involving the aircraft. India´s air force said an inquiry was underway into Wednesday´s accident.