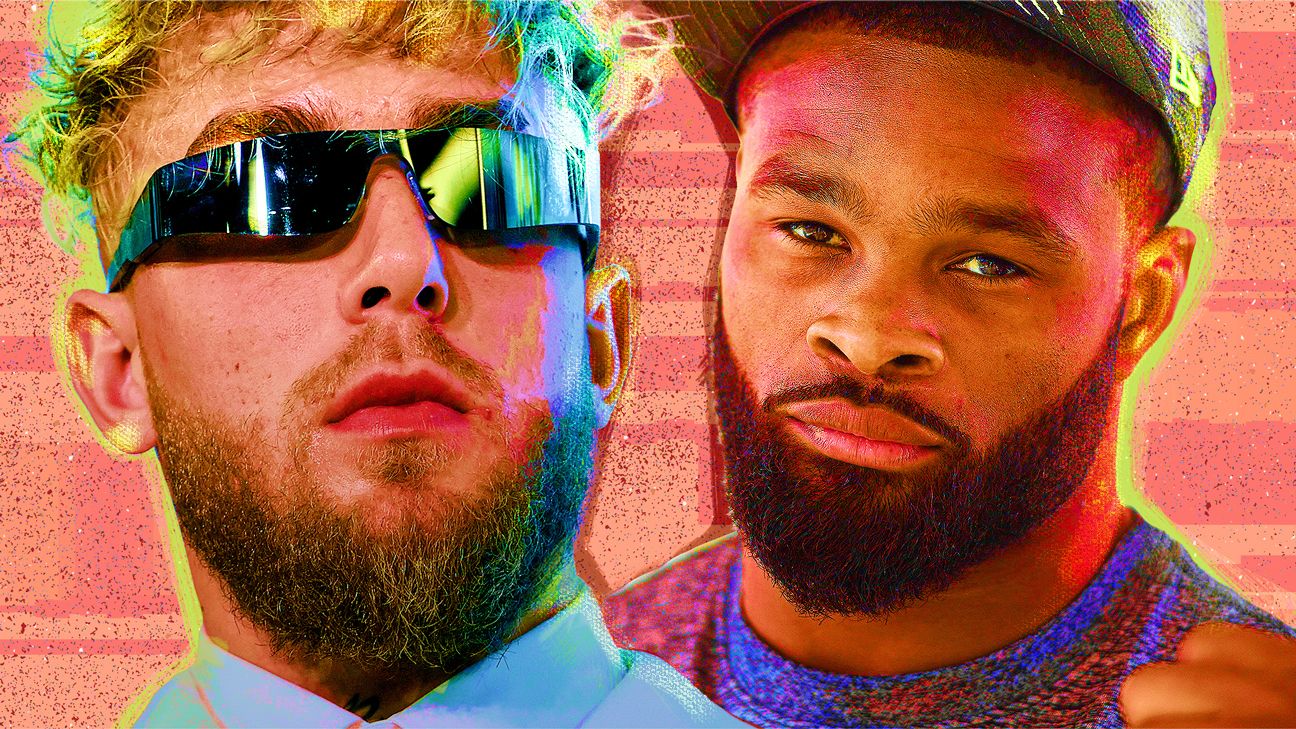 TYRON WOODLEY HAD just gone on his lunch break. It was Dec. 1, and the former UFC welterweight champion was on a set in Atlanta, working on a television show.

Woodley was about to raid the snack table in catering — there was a cookie with his name on it — when he looked down at his phone, which he had set on silent. The screen flashed “Nakisa Bidarian,” Jake Paul’s chief adviser and the co-founder of Paul’s Most Valuable Promotions.

Woodley didn’t know why Bidarian was calling. He picked up the phone, and Bidarian told Woodley that a reporter would be contacting him about an article on Paul. Before the two hung up, Bidarian mentioned the latest COVID-19 variant in passing and the potential travel restrictions facing Paul’s Dec. 18 boxing opponent, Tommy Fury. “Always stay ready,” Bidarian told Woodley. “You never know.” Woodley replied that he was already training for a potential fight in January.

“The chances that I would even get that call are slim to none, to be honest,” Woodley told ESPN. “I was doing 10-, 15-hour days. We were filming.”

At the time, Bidarian was just having an informal conversation. He didn’t know what would follow.

Less than 24 hours later, Fury was out of the fight due to a broken rib and chest infection. And within 48 hours of that call, Woodley had agreed in principle to a rematch with Paul.

In Woodley’s mind, this fight was his from the jump. Paul and Woodley had shaken hands on a rematch agreement in the ring after Paul’s split-decision win over Woodley on Aug. 29 in Cleveland. Woodley got an “I love Jake Paul” tattoo as part of the deal. (It was on his middle finger — not part of the deal.) But Paul and his team still passed on him in favor of Fury.

According to Stephen Espinoza, the president of Showtime Sports, there were some rumblings out of the United Kingdom in late November that Fury, the half-brother of heavyweight champion Tyson, was under the weather. At that point, there was no indication that the fight was in jeopardy. But as the calendar flipped over to December, everything changed in a hurry.

Through it all, Woodley continued with his boxing training, staying ready in case an opportunity came up.

“I never felt like that fight was going to happen,” Woodley said of Paul vs. Fury. “I told my coaches I didn’t feel like this was gonna happen. ‘Let’s stay ready. Let’s get prepared.'”

That meant Woodley was prepared when he got the call, and he quickly said yes — keeping a big year-end card on Showtime pay-per-view alive.

“As soon as this opportunity was presented to him, he was all in,” Espinoza said. “He said, ‘Absolutely.’ In his eyes, this is karma. He feels like the fight was close enough that certainly it demands a rematch. He feels like Jake gave him his word on the rematch. And here he is. It was a winding road to get here, but he’s got the rematch.”

Marc Raimondi speaks to Tyron Woodley about his mindset in the months leading up to his rematch with Jake Paul.

A FEW MONTHS ago, Woodley was talking with Mike Johnston, his barber and a well-known celebrity stylist. Johnston was telling Woodley that another client of his, rapper Roddy Ricch, records in the studio every day. Woodley was surprised to hear that. It got him thinking.

“You think LeBron James don’t play basketball every day?” Woodley said. “He don’t train every day? If I want to stay at the top of what I do, I have to do it every day.”

During his 12-year MMA career, which saw him ascend to the top as one of the greatest welterweight fighters in the history of the sport, Woodley said he rarely trained when he wasn’t in camp with a fight coming up. After that talk with Johnston, the former UFC champ vowed to do things differently during this new foray into boxing.

So even though Paul said he was fighting Fury and that Woodley getting the tattoo in September was “too late,” Woodley went back to the gym. Several times in October, Woodley posted photos and videos on Instagram of him training at American Top Team Evolution, the ATT affiliate facility Woodley owns and operates in Missouri. One of the captions read, “Building a Base! Don’t ever get [too] Big to get back to the basics! #TeamStayReady.”

Over the last two-plus months that Woodley has been in Atlanta filming the TV show — the name of which he is not able to share — he has been working with coach Manu McIlroy at Madhouse Fitness & Training Center in Smyrna, Georgia.

When Bidarian called Woodley on Dec. 1, the possibility of Woodley stepping in was not on his mind, Bidarian said. But Woodley thought there was something more to the call. If Bidarian wanted him to talk to a reporter, Woodley felt, that request could have been a text message.

Several hours after Woodley spoke to Bidarian, he posted a training video with a caption: “if he fumbles i’m scooping it right up, and putting points on the board.”

The next day, on Dec. 2, Fury’s team at Queensberry Promotions informed Espinoza that Fury was too ill to remain in the fight. Espinoza and Bidarian began considering three options: postponing the fight card and rebooking Paul vs. Fury, postponing the card and finding a new fight for Paul, or trying to save the Dec. 18 event with a new opponent. The last option, Espinoza said, became the priority in no small part because Amalie Arena in Tampa was already “virtually sold out.”

Showtime had considered Frank Gore and Deron Williams as opponents for Paul, per Espinoza. Gore, one of the top running backs in NFL history, and former NBA All-Star point guard Williams were scheduled to fight each other on the card in their pro boxing debuts. Quickly, though, Woodley became the target.

“The problem was we hadn’t seen either [Gore or Williams] in a competitive boxing match,” Espinoza said. “Given the storylines and given the ongoing rivalry and ongoing emotion, Tyron was easily the No. 1 choice.”

Bidarian called Woodley around 4 p.m. that day with the news that Fury was out. Woodley was saying yes before the words even got out of Bidarian’s mouth, he told ESPN, “and I’m not even a yes man.” Woodley had been in talks about competing in January. But this is what he had wanted — and thought he would be getting — all along: another crack at Paul.

THERE WERE STILL two things left to do: loop Paul in and get Woodley to not just accept the fight, but also agree to the contract. On the morning of Dec. 3, as Paul was waking up, Bidarian called the YouTube-star-turned-prizefighter and told him Fury was out and Woodley was in the process of agreeing to step in. Paul didn’t hesitate.

Espinoza said “four out of five times” when a boxer in the main event has to withdraw, the event will have to be postponed. Even when Woodley verbally agreed to the rematch, Espinoza said, he expected something to go haywire because “it was too perfect.” Paul accepting so quickly remedied some of those fears.

“Most fighters in Jake’s situation would have postponed the date, which is what the Fury family was hoping,” Bidarian said. “I think we have to recognize here that Jake is taking a big risk. He hasn’t been preparing for Tyron. Tyron has been preparing for Jake. You can go into Tyron’s timeline on social media that going back to early October he was posting about stepping in.”

Later that afternoon, Woodley and the other parties involved came to an agreement on the outline of the contract.

“Obviously, as a businessman and somebody that’s very familiar with contracts and stuff like that, I wanted to get it done,” Woodley said. “[Paul’s team was] getting nervous, Showtime was getting nervous. Jake was getting nervous. I just really in my heart felt like this was meant to be. I didn’t feel any anxiety, I didn’t feel any nerves. I felt like if I would have waited 24 hours, that would have been a bad move. I wanted to get this done while he was silly enough to fight me again.”

Woodley kept things close to the vest until everything was set. He didn’t even tell his mother, Deborah, who is revered in MMA circles, until closer to the announcement of the new fight.

“Sometimes Mama Woodley gets a little excited,” Woodley said with a laugh. “You tell her something and all of a sudden 10 people are on your phone and you’re wondering how they knew.”

After locking down terms for the second fight, which included a negotiated $500,000 bonus if he stops Paul by knockout or TKO, Woodley flew one of his boxing coaches, Floyd Mayweather trainer Gerald Tucker, and longtime training partner Darryl Cobb to Atlanta for the final days of his resurrected camp. Woodley signed his contract Dec. 5 and Showtime and Most Valuable Promotions announced Paul vs. Woodley 2 on Dec. 6.

“I’m just getting an opportunity,” Woodley said. “I’m not getting a gift, I’m not getting a freebie. Nothing is promised. Nothing I did in the past promises I’m gonna win on Saturday. But I feel like it gets me another chance. People don’t get second chances. I’ve gotten second and third chances and fourth chances, and that tells me that God wants to use me for something more important than that. He’s giving me an opportunity to show everybody my gifts and what I’m made of.”

Woodley is hoping to build on some of his most positive moments in the first fight. He rocked Paul in the fourth round, nearly knocking him down, though Paul was held up by the ropes. Woodley believes Paul lost his momentum at that point and didn’t win a single round. Two judges disagreed with him, giving Paul a split-decision victory. Espinoza said there was a feeling of “dissatisfaction” by both men in how that fight went. Paul has vowed to stop Woodley this time around.

Woodley believes he’ll be the one earning the knockout, getting that $500,000 bonus and then fighting Paul in a lucrative rubber match next year.

“It makes the movie continue in a way that it should,” Woodley said. “This has been magical. It’s been a great motivator. It’s made me passionate once again about training, about running, about dieting, about sleeping. … For me, it has to happen. The story doesn’t end the right way if it doesn’t.”

Woodley is already a shoo-in for the UFC Hall of Fame. His legacy in that sport is set — he’s one of the best ever at 170 pounds. But this rivalry with Paul, Woodley believes, is his chance to show he’s a “star,” someone who is valuable and can draw money.

His gig filming the TV show will have to wait, but that’s OK, Woodley said, because “they want me to whoop [Paul’s] ass too.” When he returns to set, the craft services table will be waiting for him. And no, even after Bidarian’s Dec. 1 call, Woodley did not deprive himself of that small dessert.

Because in this rare combat sports scenario, Woodley doesn’t just get his cookie. He gets to eat it too.

“I’m not gonna lie,” Woodley said with a laugh. “They got some fire snacks on there.”