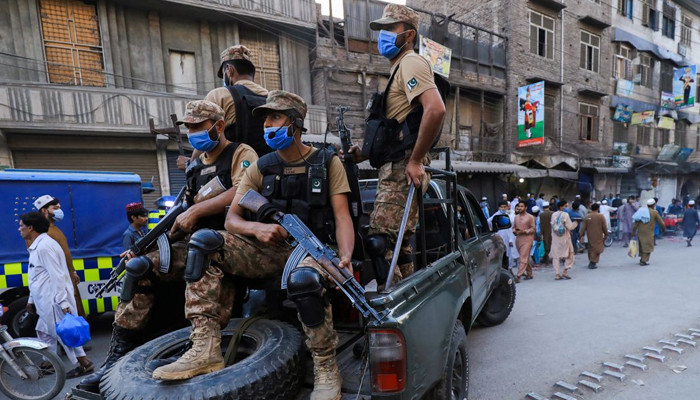 ISLAMABAD: The intelligence and security agencies of the country have been ordered to remain on high alert hours after two separate terror attacks took place in Balochistan.

The terrorists had late Wednesday evening tried to attack security forces’ camps in Balochistan’s Panjgur and Naushki, according to the Inter-Services Public Relations (ISPR).

The Ministry of Interior, in a notification, has directed the law enforcement agencies (LEAs) across the country — including Azad Jammu and Kashmir and Gilgit-Baltistan — to observe the “highest level of preparedness”.

The ministry said extra vigilance on the part of LEAs, provincial governments, and intelligence agencies would allow them to thwart nefarious designs of anti-state elements.

The ministry noted that Frontier Corps Balochistan’s “alertness and bravery” was instrumental in repelling the two attacks in Balochistan.

Issuing an update today, the ISPR said as many as 13 terrorists had been killed in Naushki and Panjgur areas.

The military’s media wing said a total of nine terrorists had been killed in Naushki, and four soldiers, including an officer, embraced martyrdom as they responded to the attacks.

Meanwhile, four terrorists have been gunned down in Panjgur. An operation of the security forces is underway in the area where they have encircled four to five other terrorists.

After terror incidents in Lahore and Islamabad, the interior ministry had also issued an alert for the LEAs to exercise “extreme vigilance”

The interior ministry, in the notification, asked the LEAs of all provinces, Azad Jammu and Kashmir, and Gilgit-Baltistan to take extra security measures to thwart any unforeseen incident.

At least five people were killed and more than 25 injured in two different terror attacks in Lahore and Islamabad.

Three people died from Lahore’s Anarkali Bazaar blast. In Islamabad, a policeman was shot dead and two others were injured at a checkpoint during a gun battle with terrorists. The police also shot down two militants in the process.