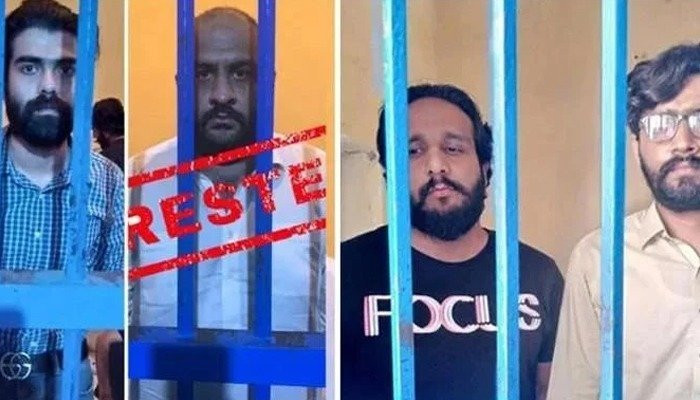 ISLAMABAD: Sub-inspector Tariq Zaman, who is investigating the Islamabad harassment case, told a court on Tuesday that during the probe, the law enforcement agency was “unable to find any witnesses when the couple was allegedly undressed.”

He added that the plaintiff “provided the video showing the couple being assaulted in a USB.”

Zaman informed the lawyers that “apart from the informant, no eyewitness confirmed the location of the apartment”.

He added that when the police visited the alleged crime scene, the apartment was “locked”.

The cop informed the lawyers that they tried knocking on the door but nobody responded and they mapped the crime from the outside. He added that in the first information report (FIR), the location of the crime has not been identified.

Shafqat Mahmood, the other IO, when asked by the lawyers about who uploaded the harassment video on social media, responded that the “police have written to the FIA for details but are yet to get a response.”

At this point, the case was adjourned and the next hearing is scheduled for February 8.

In the last hearing, the female victim told the court that she was being “pressurised to pursue the case further against her will.”

Additional District and Sessions Judge Atta Rabbani conducted the hearing of the case during which the couple appeared before the court. A day ago, Rabbani had issued a nonbailable arrest warrant against the couple for not appearing before the court for a scheduled hearing.

During the hearing police also brought Usman Mirza, the prime suspect in the harassment case, along with others to the court.

The female victim complaint to the court that she is being “pressurised to pursue the case,” and pleaded with the court to grant her “permanent exemption from the case.”

“I have already recorded a statement that I don’t know any of the accused arrested in the case, so why am I being pressurised to pursue the case further?” she said.

Upon the request of accused Umar Bilal’s lawyer, the court allowed playing a certain part of the video after asking journalists and other people to leave the courtroom.

During cross-examination, Bilal’s lawyers asked the female victim whether she was offered Rs100,000 from his client for retracting her statement.

In response, she denied the allegations levelled against her, saying that she has “not taken money to withdraw from the case.”

The female victim also told the court that she had never met the inspector-general Islamabad or any police officer, adding that she got married after the video went viral.

On the occasion, the suspect’s lawyer pleaded with the court to put the couple’s names on the exit control list (ECL), which bars people from leaving the country.

Prosecutor Rana Hasan Abbas also cross-examined the male victim of the case and asked him about his job.

The male victim said that when the video went viral: “I was associated with the real estate business but now I am jobless.”

Following the conclusion of the defence counsel’s cross-examination of the plaintiffs, the hearing was adjourned till Jan 25.

In the next hearing, the defendants’ counsels will cross-examine an investigation officer of the case, as reported by Dawn.

Last year in July, a video surfaced on social media in which the main accused in the case, Usman Mirza, could be seen violently thrashing and harassing a young couple in a room full of other men.

Within a few hours of the video going viral, the Islamabad police took Mirza into custody and registered a first information report (FIR) in the case.

Later on, seven people, including Usman Mirza, were indicted in the Islamabad couple harassment case.