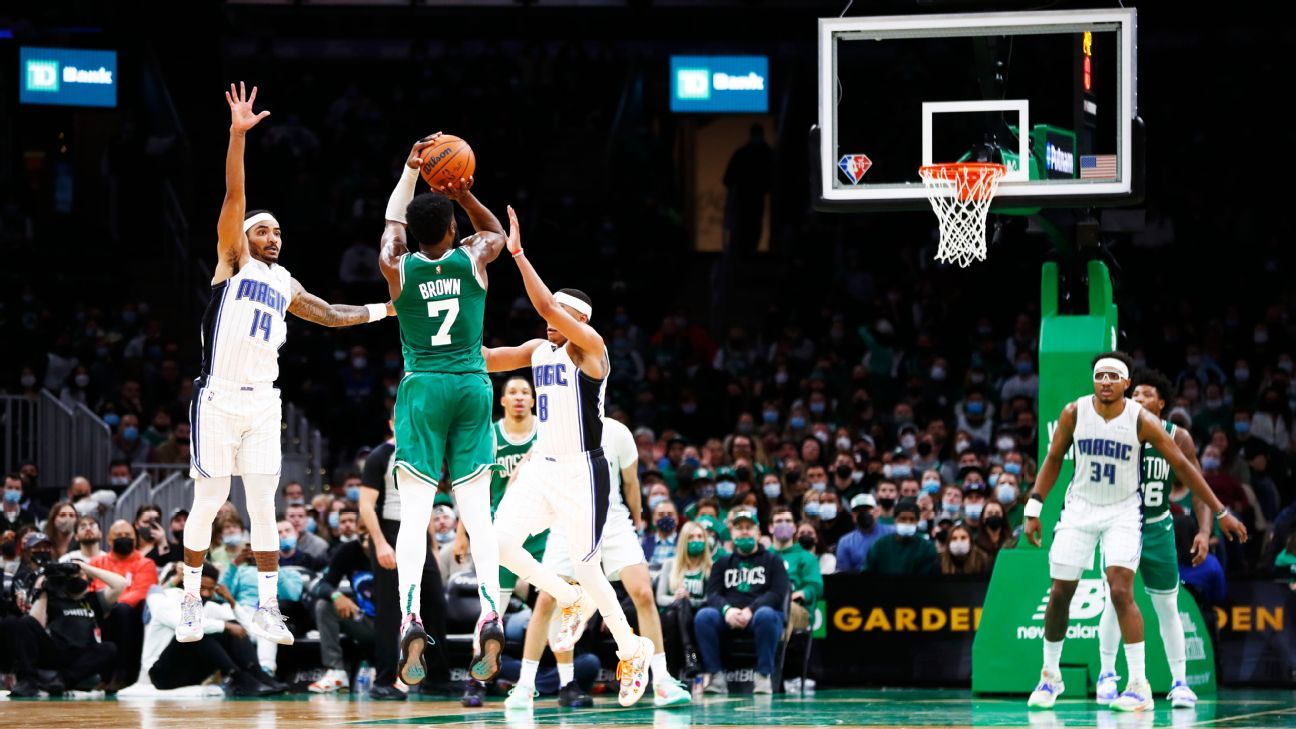 BOSTON — For just under 44 minutes Sunday night at TD Garden, it appeared the Boston Celtics were going to start their new year off about as badly as they possibly could.

But then Jaylen Brown decided that wouldn’t happen. And, as a result, what seemed destined to be one of Boston’s worst losses of the season to the Orlando Magic instead turned into a thrilling 116-111 overtime victory — one that only happened thanks to Brown becoming the seventh Celtics player ever to score 50 points in a regular-season game.

“We needed to win,” said Brown, who finished with a career-high 50 points to go along with 11 rebounds, four assists, a steal and two blocks in 46 minutes. “No way we could have lost this game … I wanted to get a win for everybody.”

It didn’t look like Brown would get the win he wanted when Boston was down 96-82 with 4:20 remaining in regulation after a driving layup by rookie Franz Wagner. But after Celtics coach Ime Udoka immediately called timeout following that bucket, the game completely turned around.

Boston began flying around, forcing a young Magic team into several costly mistakes down the stretch — and, just as importantly, finally made some shots. That was largely thanks to Brown, who scored 12 of the 18 points Boston would score through the Celtics’ 18-4 run to end regulation and surge back into the game.

“Just doing what we did in the first quarter to get us the lead, and that’s moving the ball,” Marcus Smart said of what allowed Boston to rally. “Not settling, letting the game come to us, taking what they give us. Not trying to force it … just trying to allow Orlando to make the mistakes for us. We did that and we let the game come to us.

“It wasn’t pretty, but we came out with the win and that’s because we kept our composure and we kept with it.”

It was only after Brown had managed to drag the Celtics all the way back from their deficit that he looked up near the end of regulation and realized he had 47 points. And while his 3-pointer with 1:29 to go in overtime was what caused him to hit the 50-point plateau — something only six other players (Larry Bird, Jayson Tatum, Kevin McHale, Sam Smith, Paul Pierce and Isaiah Thomas) in Celtics history had done before him — those were the only points he scored in the extra session.

Instead, on a night when he carried so much of the burden for Boston offensively, Brown finally got some help in overtime — mainly in the form of Dennis Schroder, who scored half of Boston’s 16 points in the extra session.

“I mean, the NBA is a game of runs,” said Schroder, who scored 21 points and dished out 7 assists in 40 minutes in his first game back from the league’s health and safety protocols.

“It’s not easy to win a ballgame in the NBA. Sometimes s— happens. It shouldn’t happen, but it happens. So I think we did a great job just being up 13, I think, in the second quarter from being down 14. And then I think Jaylen, Marcus, everybody stepped up and we got stops. And I think we went on a hell of run, closed it out in overtime.”

Sunday’s game was a microcosm, in many ways, of Boston’s entire season. The Celtics have been a never-ending roller coaster ever since the 2021-22 campaign began, with some impressive highs and some devastating lows — including a couple of awful losses in the past seven days against depleted foes in the Minnesota Timberwolves and LA Clippers.

Boston has dealt with a never-ending series of guys going in and out of the lineup due to a combination of injuries and COVID-19, which has recently ravaged the roster. That includes costing the Celtics their leading scorer, Tatum, for the past four games.

Udoka has repeatedly — and fairly — pointed out that the revolving door of players being available has cost the Celtics the ability to establish any sort of consistency. But Boston finished with a .500 record last season, and if it beats the San Antonio Spurs on Wednesday it will be a .500 team nearly halfway through this season, too.

Still, the Celtics see reasons for optimism. They escaped from a brutal December schedule that saw them play a full slate of teams with .500 or better records when the month began with a respectable 6-9 record, and entered Sunday with the sixth-easiest schedule remaining in the NBA, according ESPN Stats & Information.

But Tatum’s eventual return, and Boston hoping to finally get an extended stretch of play with a full roster — or something close to it — won’t mean much if the Celtics can’t escape from the inconsistency that’s plagued them all season. It took a historic performance from Brown on Sunday to escape with a win.

“I don’t know and I don’t like that,” Brown said when asked why Boston tends to play better once it has fallen behind. “If that’s the case, then it’s not good. We’re trying to put 2021 behind us. It’s a new year.

“We’re trying to start off on the right note. First game we got a win but we have to continue to build good habits as we welcome guys back into the lineup and things like that. We have to make a push to win some games here and I think we can do it.”