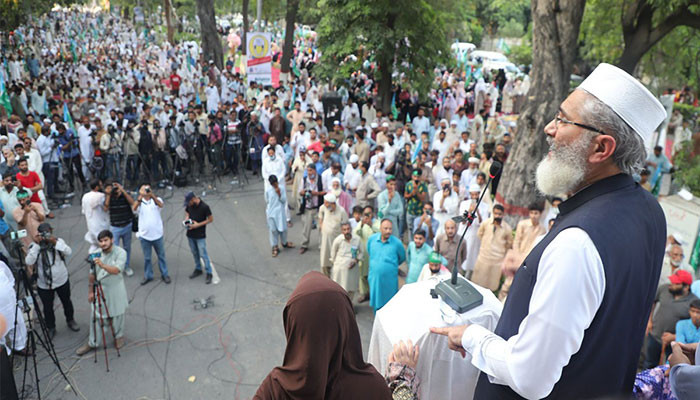 KARACHI: Asking the Sindh chief minister to devolve relevant powers to local governments, Jamaat-e-Islami Pakistan chief Sirajul Haq on Sunday said the religious party will not leave the people of Karachi at the mercy of the PPP’s provincial government.

The JI chief said this while addressing the participants of the ‘Save Karachi’ march organised by the JI Karachi chapter to pressurise the Sindh government to withdraw the recently-passed controversial local government bill from the provincial assembly.

A large number of people attended the rally that started from the mausoleum of Quaid-e-Azam Muhammad Ali Jinnah to the Tibet Centre. Siraj said the JI will fight the case of Karachi across the country if the PPP government fails to fulfill its obligation.

He said the people of Gwadar with their unity and resolute commitment have recently compelled the ruling regime in the province to pay heed to their demands. “Similarly, the ruling government in Sindh will have to bow down before the demands of the residents of Karachi.”

Siraj said Karachi is the mother of all cities and provides the major chunk of revenue to the state but unfortunately all political parties, including the Pakistan Tehreek-e-Insaf, Pakistan Muslim League-Nawaz, PPP and the Muttahida Qaumi Movement, plundered its resources but never delivered.

He said that a mayor with powers of only brooming the roads would be of no use for Karachi, a city of some 30 million people.

Referring to the powers of mayors in Istanbul, London, and other international cities, the JI chief said all the powers have been centered into the chair of the Sindh chief minister, adding if the situation continues to prevail, it would not help in resolving local issues.

He said the PPP government in Sindh should not have bulldozed the controversial bill in the Sindh Assembly, instead the government should have devolved the powers to local bodies.

The JI chief said only the JI has the capability to transform Karachi and put it on the right track. “Karachi had enjoyed a remarkable era of progress and development during the tenures of former mayors Abdul Sattar Afghani and Naimatullah Khan and the JI can bring back the golden era of the city,” he said.

JI Karachi chief Hafiz Naeemur Rehman said the march made it clear that the city would not tolerate the imposition of feudalism and the PPP will have to withdraw the black law. Rehman also announced that the JI will be cordoning off the Sindh Assembly in protest against the controversial bill on December 31 if the provincial government didn’t withdraw the bill.

The JI leader also asked the federal and provincial governments and those in the corridors of power about progress on the Karachi Transformation Plan.

JI leader Osama Razi said the ‘Save Karachi’ March and the Karachi Rights Movement have set a new dimension to politics in the city.

Representatives from trade bodies, professional fraternities, businesses and industries and various sectors also attended the JI’s march while protesters, including women, children, and senior citizens, chanted slogans against the unjust policies and the controversial bill.