Helmed by Saim Sadiq, the film is the first Pakistani feature to premiere at the prestigious festival

Team Joyland has made the entire country proud after receiving a standing ovation at the Cannes Film Festival. The film made history as the first feature film to be screened at the prestigious festival, which hosts some of the biggest directors and actors in the global film industry today. With themes of forbidden desire and rebellion, Joyland was widely adored by critics, with Deadline deeming it a “thoughtful, well performed and engrossing drama”.

The international feat has left the local film industry and cinema-lovers in an euphoric mood. Helmed by Saim Sadiq, videos of the applause began making rounds on social media on Monday. The team, which included Saim, actor Sarwat Gilani, filmmaker Sarmad Khoosat, veteran actor Sania Saeed, as well as Joyland stars Alina Khan, Sana Jafri and Ali Junejo, was seen shedding tears of joy at the screening of the film.

Following the screening, Sarmad took to Instagram to praise the young filmmaker, writing, “I could be biased (sure, accuse me) but with whatever authority I have, I hereby declare that there’s NO better filmmaker and storyteller than my puttar Saim Sadiq.” On getting emotional during the screening, he added, “I bawled and cried my heart out with joy and alllll the pride at the world premiere. Thankfully there are no photos of me right after the screening.”

Sharing a group photograph of the team from the red carpet, Sarwat wrote on the photo-sharing app, “They say it takes a village but what it really takes is a team of well meaning solid individuals with you to make it happen – presenting to you the joy in Joyland my team my heart and together we stand representing pakistan!”

Indian critic Namrata Joshi, sharing videos of the standing ovation, compared the film to the Vicky Kaushal-starrer Masaan, which premiered at the festival in 2015. She wrote on Twitter, “Standing ovations for debuts can be so damn overwhelming… Joyland is a tender heartbreaker of a film… Reminding me of our own Masaan back in 2015.”

Osman Khalid Butt tweeted, “Such a moment of pride to see Joyland receive a standing ovation at Cannes, and the immense praise it received. The doors this will open, the strength this will give to the new wave of Pakistani cinema. Just – wow. Congratulations to the entire team. Can’t wait to watch.”

Such a moment of pride to see #Joyland receive a standing ovation at Cannes, and the immense praise its received.
The doors this will open, the strength this will give to the new wave of Pakistani cinema. Just – wow.
Congratulations to the entire team.
Can’t 𝘸𝘢𝘪𝘵 to watch.

Actor Sanam Mody wrote on Instagram, “History in the making! Bursting with pride and joy for this team from Joyland.” Filmmaker Wajaht Rauf also took to the app to congratulate the team, writing, “Way to go team Joyland! Super proud of you!” 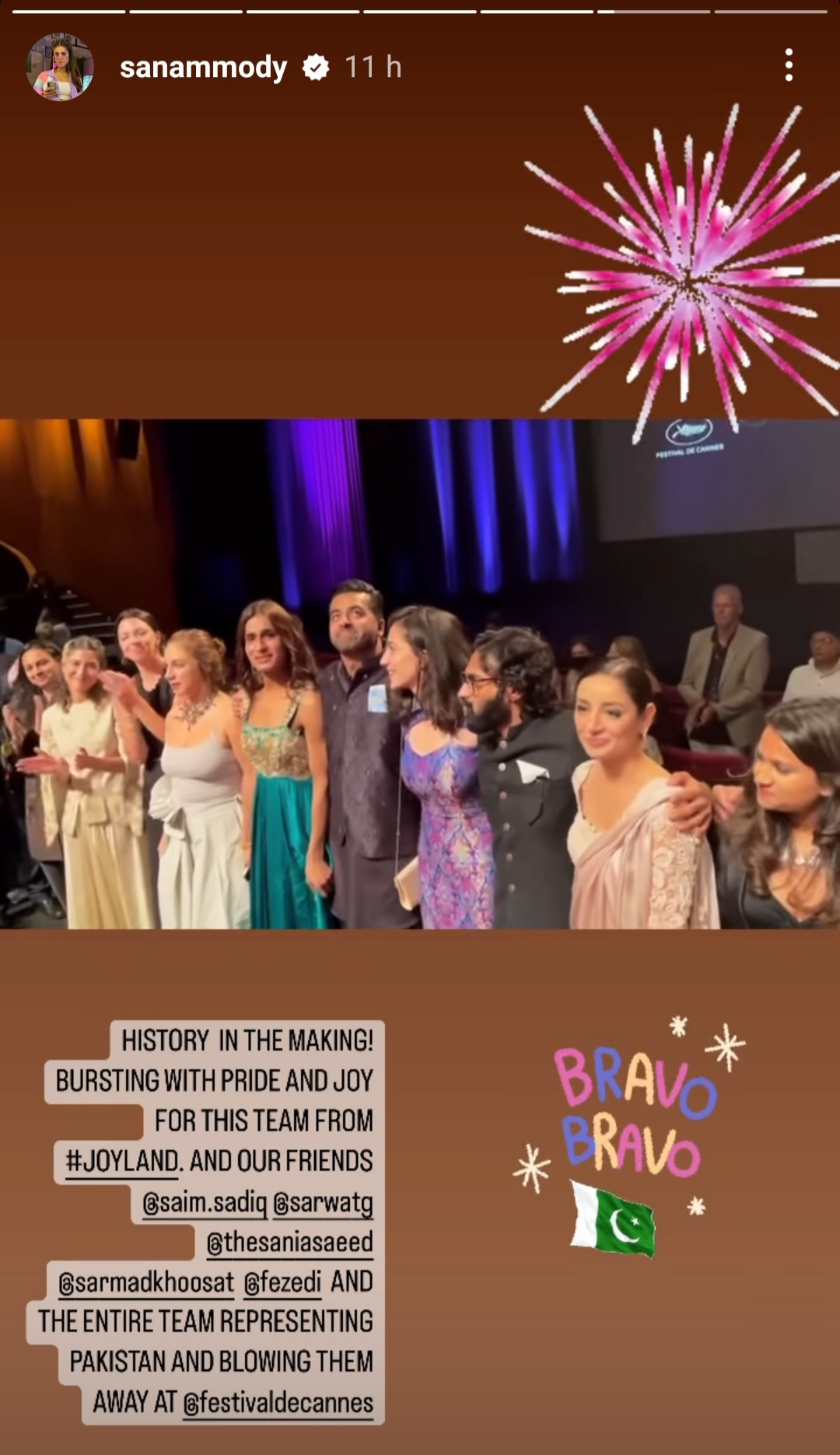 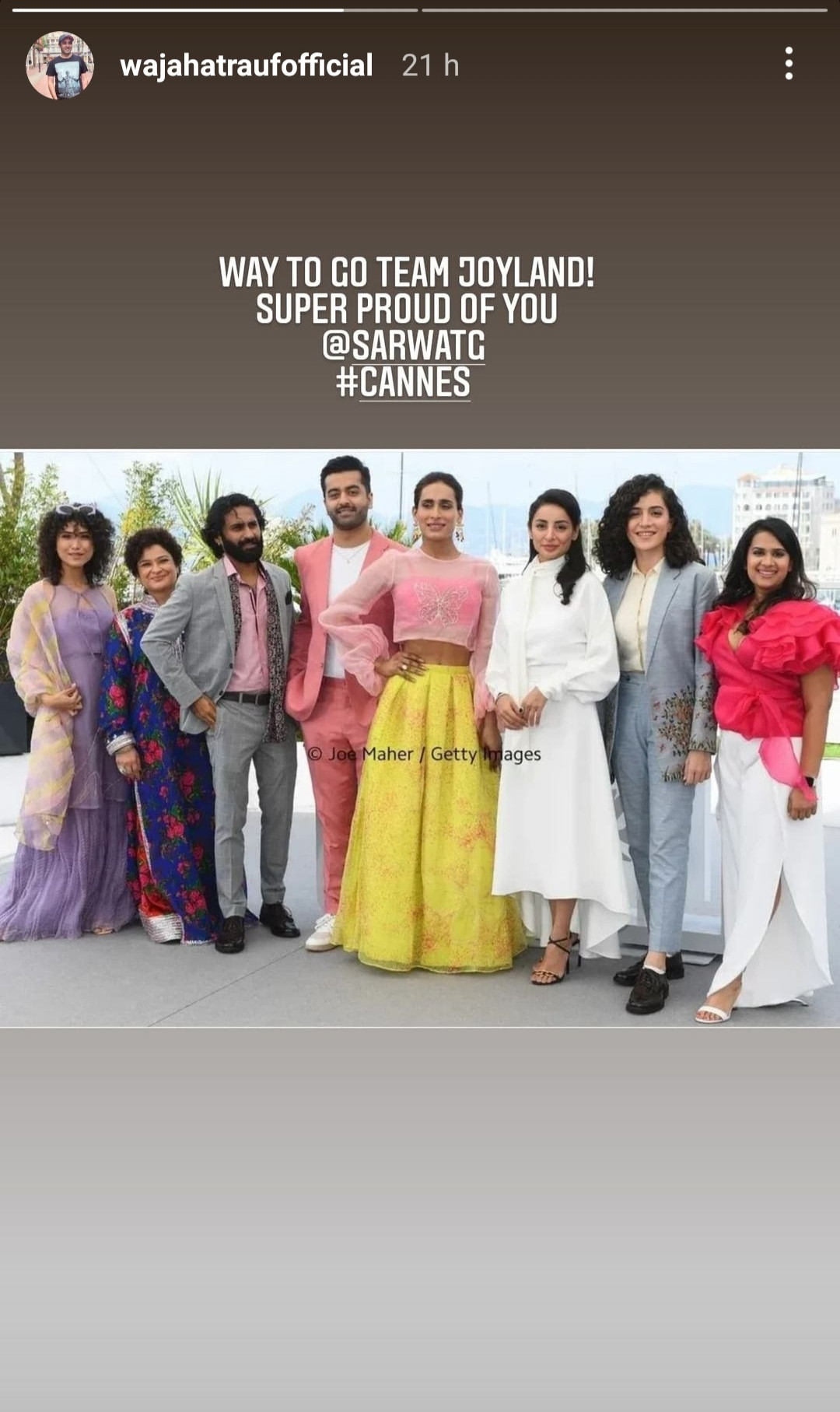 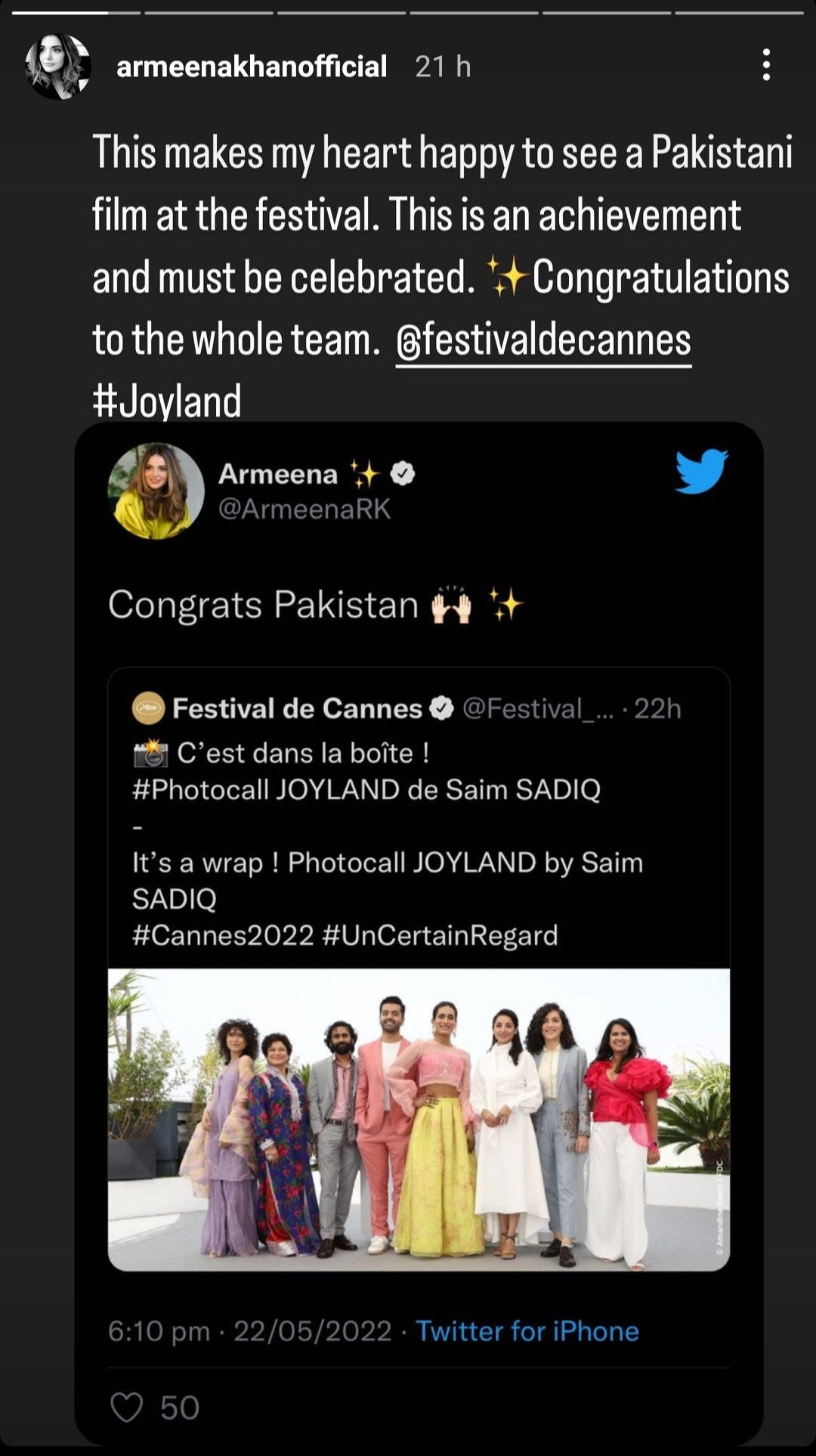 Speaking to Indian film critic Anupama Chopra about Joyland, Saim shared that he feels “very overwhelmed” by the honour. “There’s a lot of expectation, which is something you don’t think of when you make a film. The whole country is looking at you, and this film is meant to represent the country. When you were making the film, that wasn’t the purpose, but that becomes the purpose, more so than what the film is doing.”

The category for feature films at Cannes only takes in a limited number of 14 films and it is a moment of incredible pride that a Pakistani film made the cut — that too for the first time in history! The film also features transgender actor Alina Khan in a lead role.