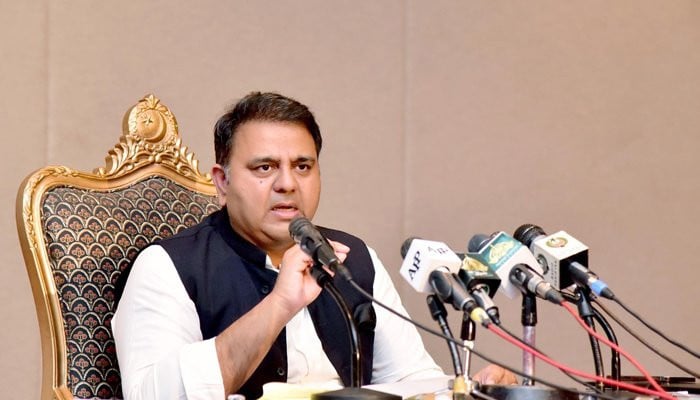 ISLAMABAD: Minister for Information and Broadcasting Fawad Chaudhry urged the judiciary on Sunday to take stock of its “rapidly declining reputation” in the world rankings.

In a tweet, Chaudhry said the Minister for Law and Justice Forough Naseem had raised an important question: if judges were not responsible for the assets of their wives and children, then how was it possible to hold politicians and bureaucrats accountable?

The minister said that the new Chief Justice of Pakistan, Justice Umar Atta Bandial, would face this challenge when he will be sworn in.

“Will district judges and administrative officers not be answerable for their family’s assets?” he asked in response to the Supreme Court’s detailed verdict issued in Justice Qazi Faez Isa’s case.

The law minister termed the SC’s decision in the review case as “wrong and contradictory”.

The Supreme Court SC had on Saturday had issued the detailed verdict in the Justice Qazi Faez Isa review case, saying that the Federal Board of Revenue (FBR) obtained the tax records of the judge and his family in an “unlawful” manner.

Justice Afridi, referring to the SC’s earlier judgement, also noted that the apex court did not the authority to issue directions to the Supreme Judicial Council (SJC) on initiating an inquiry against Justice Isa.

“To sum up, it would be safe to state that this Court did not have the jurisdiction to issue the impugned directions to the Council to consider initiating, or otherwise, an inquiry against the Petitioner Judge based on the ‘information’ received from the tax officials of the FBR,” Justice Afridi said.

Meanwhile, the detailed verdict mentioned that the apex court had ordered an investigation against the judge’s family without providing a fair and meaningful hearing to Mrs Isa, “thus violating the principle of natural justice”.