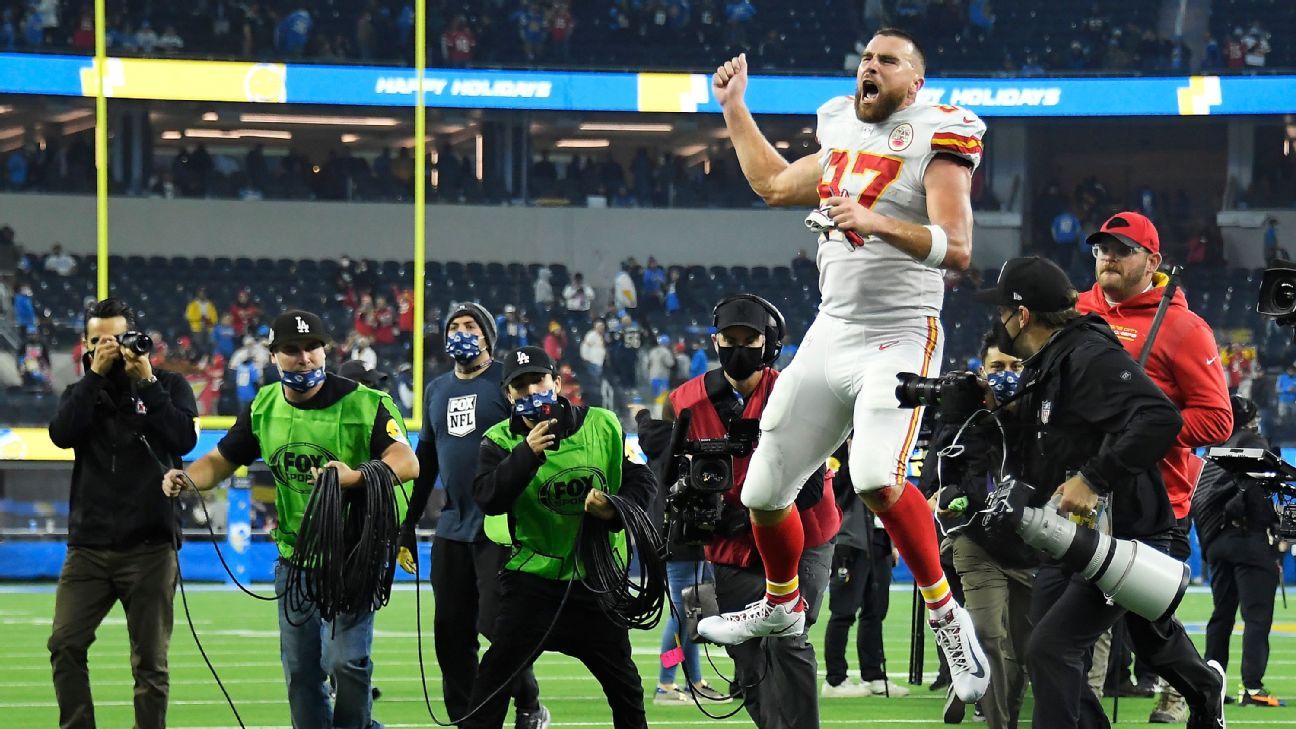 INGLEWOOD, Calif. — As one of the elder statesmen of the Kansas City Chiefs, tight end Travis Kelce sometimes hears from coach Andy Reid and his teammates about his advanced age of 32.

“Coach Reid always reminds me when I’m feeling a little sore,” Kelce said Thursday night from SoFi Stadium, where he scored both the game-tying and game-winning touchdowns as the Chiefs rallied to beat the Los Angeles Chargers 34-28 in overtime. “He always kinds of throws a jab at me. He says, ‘Feel like you’re 22 again, baby.’

Kelce played like a younger version of himself against the Chargers, finishing with a career-high 191 receiving yards and scoring the game winner on a 34-yard pass from Patrick Mahomes as Kansas City took control of the AFC West. The 10-4 Chiefs, winners of seven straight, lead the Chargers by two games in the division with three to play.

Kelce caught a tying 7-yard touchdown pass with 1:16 left in the fourth quarter, then ended the game with his catch-and-run in overtime. On first-and-10, Kelce pulled in Mahomes’ pass at the 30 and eluded two tackles en route to the end zone, where he was swarmed by teammates.

With his effort against the Chargers, Kelce has exceeded 1,000 yards for the sixth straight year — but it’s still be an unusual season for him nonetheless. He has four games with fewer than 30 yards, and had been held to six total receptions the past two games.

“Everyone is talking about him losing his step or being off his game,” Reid said.

Reid said he and the offensive coaches worked during the week to find ways to get Kelce open. He was single covered on his game-winning touchdown and his 69-yard catch in the fourth quarter that led to Tyreek Hill‘s 1-yard touchdown.

“He’s kind of our elder statesman,” Reid said. “I keep saying like he’s over the hill, but his acceleration after the catch, that was something that late in the game.”

Kelce had 104 of his yards after the catch, the second most in his career. On his winning touchdown, NFL Next Gen Stats gave him a 0.4% chance of scoring.

Kelce said he’s better at running after the catch than he was earlier in his career. He said it’s a product of his film study.

“Nonstop I’m trying to find ways … to understand the coverages they’re in, understand the routes around me, to always have another answer,” Kelce said. “When I catch the ball, now I know where to attack the defense.

“That’s been (a point of emphasis), understanding the defenses that teams are trying to play against you, where those voids are, and where those pockets are to try to make a guy miss and get vertical.”

Kelce had five of his 10 catches for 142 yards in the fourth quarter and overtime.