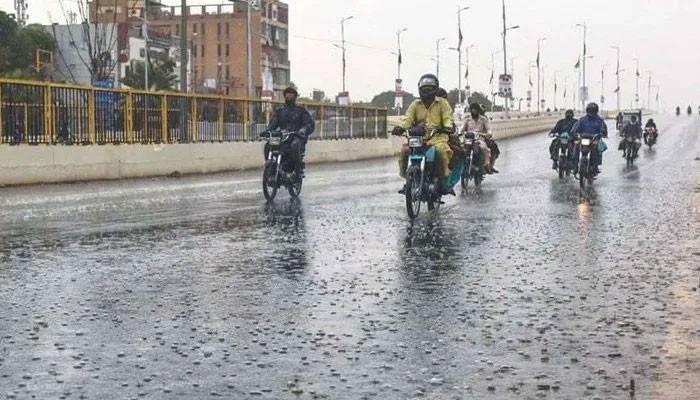 KARACHI: The weather has turned pleasant in Karachi after parts of the city received light rain Sunday.

Earlier today, the Pakistan Meteorological Department (PMD) had forecast Karachi may receive its first winter shower in the next 24 hours.

The minimum temperature in the metropolis is likely to drop and expected to stay between 15-17 degrees Celsius over the next 24 hours, as per the Met office.

The humidity level recorded in the city today morning was 90%. However, light winds are currently blowing from the northeast in the metropolis.

Light rainfall was reported in different areas of Punjab and Balochistan Saturday. A westerly wind system entered the provinces, the Met office said, adding that the rain-bearing system could have impacts in Karachi today and tomorrow.

In Punjab, rain was reported in Lodhran, Kabirwala, Gojra, Jahanian, Toba Tek Singh and other cities.

Meanwhile, dense fog continued to prevail in most parts of Punjab, prompting closures of several sections of the motorway Sunday.

As per the details, M2, M3, M4 and M11 have been closed for all kinds of traffic after visibility dropped to a few meters due to thick fog.

Lahore once again ranked as the most polluted city in the world, as per the Air Quality Index (AQI) today. The city’s level of polluted air didn’t drop despite the closure of schools and offices on Sunday.