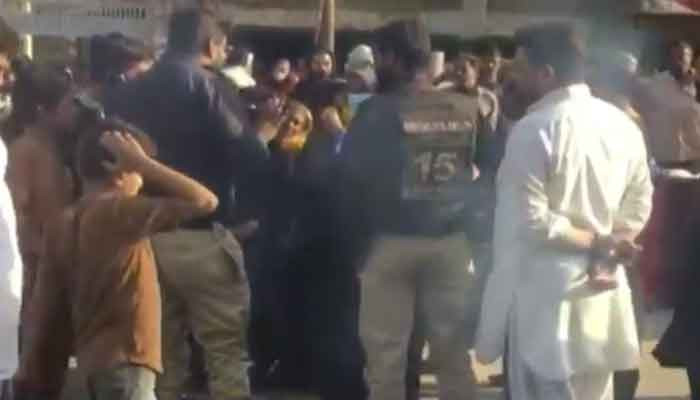 Scores of residents of Karachi’s Garden area took to the streets Thursday to protest against the suspension of gas supply.

The suspension of gas supply has made life difficult for the people across the country, who are finding it difficult to cook food and heat water for their daily use, especially in the harsh winter.

Meanwhile, the Sui Northern Gas Pipelines Ltd (SNGPL) has decided to cut off the gas supply to captive power plants for the next 15 days in view of the rising heating and cooking demand from the domestic sector.

As per an announcement made by the SNGPL, due to severe cold weather, gas demand in the domestic sector increased significantly, therefore, gas supply to the captive power sector would be suspended from 9pm, Wednesday.

The SSGC spokesperson had said that the decision has been made in line with the gas load management plan approved by the Ministry of Energy (Petroleum Division).

“The decision to discontinue the supply to non-export industries has been made to fulfil the requirement of domestic consumers [especially in Balochistan which is facing extremely cold weather],” the statement read.

The supply will remain suspended to the general industries till further orders, he had clarified.

The statement had further stated that the provision of additional gas supply to Balochistan is essential for human survival in the province due to extreme weather conditions during the winter season.

Last month, Federal Minister for Energy Hammad Azhar had said that the supply of gas will be ensured for domestic consumers during breakfast, lunch, and dinner hours amid the major gas shortfall in the country during the winter season.

He had stated this during a Senate meeting discussion over the expected gas crisis, with Azhar denying rumours about the provision of gas for only three days a week.

“For the first time, the government is trying to ensure gas supply three times each day,” Azhar had said.

He had informed Senate that Pakistan will soon strike a gas deal with Russia and said that the repair of gas pipelines is underway.