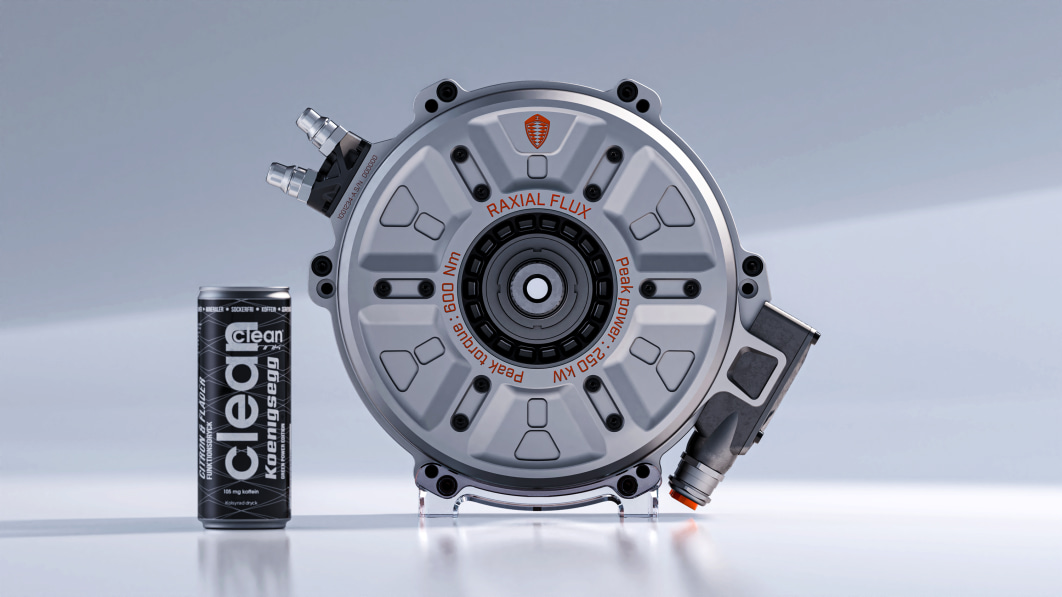 It seems that what Koenigsegg enjoys just as much as making internal-combustion-powered teleportation devices shaped like cars is creating neat new tech to go in those cars. The new hotness from the minds in Angelholm, Sweden is the Quark electric motor, David silicon carbide inverter, and Terrier EV drive unit. Engineering teams have developed the Quark e-motor for the Gemera sedan, the four-door hypercar, fitting three of them to supplement the three-cylinder, 600-horsepower internal combustion engine. The two major topologies, or designs, for electric motors are axial flux, which emphasizes power density, and radial flux, which emphasizes torque density. The Quark combines both topologies into a form Koenigsegg calls “Raxial flux,” fashioned with cost-no-object materials like aerospace-grade steel and a carbon fiber rotor.

The result is a 63-pound e-motor about the height of two energy drink cans that produces a steady 134 horsepower and 184 pound-feet of torque. When prodded, maximum output leaps to 335 hp and 441 lb-ft for 20 seconds. The engineering lead said the three e-motors in the Gemera are “to bolster the low-speed” performance “where you need it, for brutal acceleration,” after which the ICE will take charge for the run to 400 kilometers per hour (248 mph).

We will undoubtedly be seeing more of this kind of innovation, and in fact, we’ve already seen it. Two years ago, we interviewed the principals at the Texas-based company Linear Labs, who had created the Hunstable Electric Turbine. The HET is an e-motor that sandwiches a radial e-motor design between two axial e-motor ends. Creators Fred and Brad Hunstable had said that “[for] the same size, same weight, same volume, and the same amount of input energy into the [HET], we will always produce – at a minimum, sometimes more, but at a minimum – two to three times the torque output of any electric motor in the world, and it does this at high efficiency throughout the torque and speed range.” Even better, for EV applications, the Hunstables said their motor could operate as a direct-drive unit, eliminating the need for a gearbox.

Koenigsegg hasn’t gone that far, yet. Before the Quark, the Swedes developed a six-phase silicon-carbide inverter they call David. When two Quarks meet one David and a planetary gearset, they add up to one Terrier, an EV drive unit with all the torque vectoring every electrified hypercar needs. For its continuous 268 hp and 368 lb-ft and momentary bursts of 770 hp and 882 lb-ft, the Terrier weighs just 187 pounds, the unit’s weight held down partly by needing just the one six-phase inverter for its two Quarks as opposed to needing two of the more traditional three-phase inverters. The automaker says the unit can be “elasto-bolted” to a carbon fiber monocoque, saving more weight in the chassis versus using mounting hardware or subframes.

Koenigsegg plans to make the Quark available for applications beyond EVs, including aerospace and marine uses, and perhaps a VTOL craft like the air taxis that we’ve been waiting for since The Jetsons.