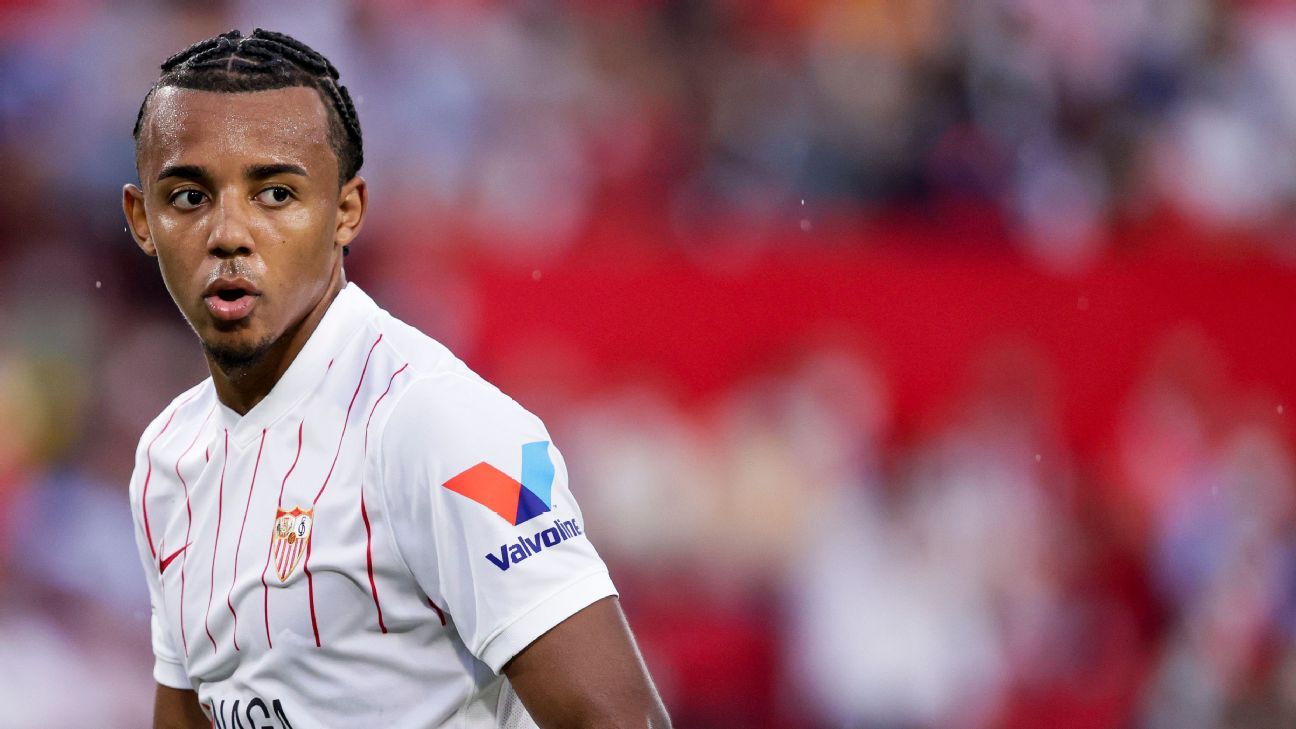 Thomas Tuchel has a list of targets to plug Chelsea’s leaky defence — ESPN’s Insider Notebook has the latest. PLUS: Anthony Martial’s agent comments did not have the desired effect, and the MLS hotshot on the radar of Premier League teams.

Chelsea are still pursuing Sevilla‘s Jules Kounde, sources told ESPN, with the possibility of a move in January not off the table as the LaLiga club are willing to drop their €80 million valuation.

Chelsea boss Thomas Tuchel is eager to sort out his defence with key players out of contract in June, as well as seeing his side concede 11 goals in the past six matches — winning two — having let in three in 10 matches before that spell.

Antonio Rudiger, Thiago Silva, Andreas Christensen and Cesar Azpilicueta‘s deal all expire in the summer and no breakthrough has been made in negotiations with them. Sources have told ESPN that Barcelona are monitoring the situation with Azpilicueta.

While sources said a move for Kounde is more likely in the summer, a January transfer has not been ruled out. Tuchel is a huge admirer of Kounde, sources said, with his interest dating back to when he was Paris Saint-Germain manager and Kounde was at Bordeaux.

– January transfer window: All you need to know
– Stream ESPN FC Daily on ESPN+ (U.S. only)
– Don’t have ESPN? Get instant access

Chelsea were in direct negotiations with Sevilla over the transfer of Kounde last summer but a move broke down when neither side could agree on a fee for the France international. The LaLiga side wanted the full release clause of £80m for the centre-back but are now willing to negotiate a fee between €50m-€60m for a player with two-and-a-half years remaining on his contract.

Sources told ESPN that Kounde is keen on a move to Stamford Bridge and the 23-year-old is believed to have agreed the framework of a four or five-year contract.

Tuchel and Chelsea’s recruitment team have their eye on other options in case they cannot land Kounde, sources said. Sven Botman, the Netherlands internatiomal at Lille, as well as Wolfsburg’s Maxence Lacroix are also targets as Tuchel looks to strengthen his backline. — Julien Laurens

Castellanos helped New York to their first MLS Cup triumph this season, scoring 22 goals. The 23-year-old’s form has alerted clubs across Europe and Turkish giants Besiktas have also made an enquiry about his availability along with teams in Spain, Italy and the Championship in England.

Despite being a key part of New York’s success this season, sources told ESPN that the City Football Group would listen to offers of around £15 million for Castellanos if the Argentina under-23 international decides the time is right to take the next step in his career.

City boss Pep Guardiola has also been impressed by reports sent back by his scouting network. Guardiola watched New York’s MLS Cup triumph against Portland Timbers on Saturday during which Castellanos scored.

Sources added that City could explore the possibility of having Castellanos train at the City Football Academy now the MLS campaign is complete, although the process could be complicated by the United Kingdom government’s COVID protocols amid a surge in cases in recent weeks. — Rob Dawson

Manchester United are yet to receive a serious enquiry about Anthony Martial‘s availability in January more than a week after the Frenchman’s agent announced he is keen to leave Old Trafford, sources told ESPN.

But sources told ESPN it has not yet prompted a wave of interest and there are doubts at United about which clubs could afford a fee for the striker plus a significant wage. Martial is under contract until 2024 with the option of another year.

Sources added that United are willing to consider offers for Martial, particularly because interim coach Ralf Rangnick has made it clear he only wants to work with players who are happy at the club. Still, they are unlikely to sanction a cut price exit and would also be reluctant to subsidise Martial’s wages as part of a loan arrangement.

Following Lamboley’s comments last week, Rangnick hit back by insisting Martial would have to inform the club himself if he wants to leave.

Martial is yet to feature under Rangnick because of a knee problem and has made 10 appearances so far this season. — Rob Dawson

Steve Nicol thinks the oddsmakers got it right when favoring Manchester United over Atletico Madrid in the Champions League Round of 16.

Serie A could be reduced to 19 teams

Serie A could be reduced to 19 teams for the second half of the campaign if a buyer isn’t found for bottom club Salernitana.

Salernitana and Lazio have the same owner in Claudio Lotito, which violates rules in Italian football that prohibit a conflict of interest in multiple teams.

Lotito placed Salernitana in a trust in June and club CEO General Ugo Marchetti became the sole director at the club. However, the trust was not recognised or officially ratified by the Italian Football Association, the FIGC, as one of Lotito’s relatives had links to the trust via a holding company.

Salernitana have been up for sale since their return to Serie A this season, but holding company Melior Trust and Wildar Trust have so far been unable to find a successful bidder — and there doesn’t even appear to be any concrete interest in sight.

The deadline for a solution is Dec. 31 and if the club does not find a new owner, Salernitana face expulsion from the 20-team league. Dec. 31 would mark the midway point in the season, with each team having played half of their 38 matches.

In the event Salernitana are removed from Serie A, all results against them this season will be annulled. At this stage, it is unclear what division the club would play their matches in this season, but there is a possibility the club would stop playing this campaign and then resume next season in Serie B. Rules state two clubs may share an owner if they do not compete in the same division. Relegation, therefore, from Serie A this season would then be cut to two teams.

Salernitana are bottom of the table, four points from safety, with eight points from their opening 17 matches. They returned to the top flight at the end of the last season for the first time since 1999. — Andrew Cesare Richardson

Barcelona’s Sergio Aguero gets emotional in a news conference announcing his retirement.

Alexis Sanchez not a priority for Barcelona

Alexis Sanchez‘s return is not a priority for Barcelona, multiple sources told ESPN, after the club were offered the chance to sign the Inter Milan forward.

Barca are looking to reinforce their attack in the January transfer window following Sergio Aguero‘s premature retirement but club sources insist other candidates are ahead of Sanchez, with Manchester City‘s Ferran Torres and Manchester United‘s Edinson Cavani their main targets.

– Ogden: Aguero’s legacy is more than a goal

“Many things would have to happen for Alexis to return to Barcelona,” a club source told ESPN amid reports there was a preliminary agreement for the Chile international to return to Barca in a swap deal that would see Luuk de Jong join Inter.

Sanchez scored 37 goals in 141 appearances in his three seasons at the Camp Nou before joining Arsenal in 2014. Barca are not considering re-signing him as yet because Torres and Cavani represent better options, sources said, although the LaLiga side are aware their financial constraints mean a move for Torres in January is highly unlikely. Cavani’s signing would be a less costly alternative as his contract at United expires in the summer, but sources said the Premier League side are reluctant to sanction a departure next month.

Barca, meanwhile, are still working on lowering their wage bill. President Laporta has said that salaries and amortisation payments still account for around 80% of their predicted revenue of €765m for the season. LaLiga’s economic controls demand that figure is around 70%, although Barca’s is even lower this season as they must make amends for recent losses. Gross debt, meanwhile, stands at around €1.4 billion. — Adriana Garcia and Moises Llorens