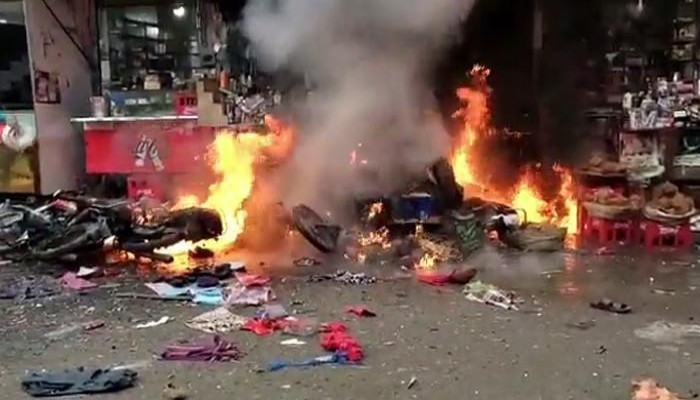 LAHORE/ISLAMABAD: The death toll from the Lahore Anarkali Bazaar blast has risen to three from two a day earlier, as the Senate is scheduled to debate over terrorism-related incidents on Monday.

The Mayo Hospital administration confirmed the updated death toll and shared that out the total 25 injured people, 13 were under treatment and 12 had been discharged after receiving necessary medical aid.

The counter-terrorism department (CTD) and forensics teams, meanwhile, have gathered evidence from the blast site, while police have sealed all the shops surrounding the area and closed the roads to and from the market.

Police officials said a first information report (FIR) has been registered on the complaint of inspector Abid Baig and a special team has been formed to track the culprits, while CCTV footage is being used to hunt them down.

Senator Raza Rabbani told the Senate that terrorism-related incidents have been on the rise in the country.

“First, an incident took place in Islamabad and now in Lahore […] the interior minister should explain these incidents to the House,” Rabbani said, while speaking on the floor of the Senate.

For his part, Federal Minister for Railways Azam Swati said Pakistan had enemies within and outside the country. “The government is responsible to give answers.”

He called on Interior Minister Sheikh Rasheed to come to the Upper House of Parliament and explain the reasons behind the incidents. “The interior minister is responsible for the peace and security of the country.”

The interior minister reached the Senate shortly after the Opposition’s demand for an explanation.

Rasheed briefed the House over the two recent terror incidents in Pakistan – the one on January 20 in Lahore and on January 18 in Islamabad.

The interior minister said a police constable was martyred and two other police officials were injured in the Islamabad incident — where terrorist and police engaged in a gun battle.

He said two terrorists were also shot dead in and law enforcement agencies had recovered six mobile phones from their possession.