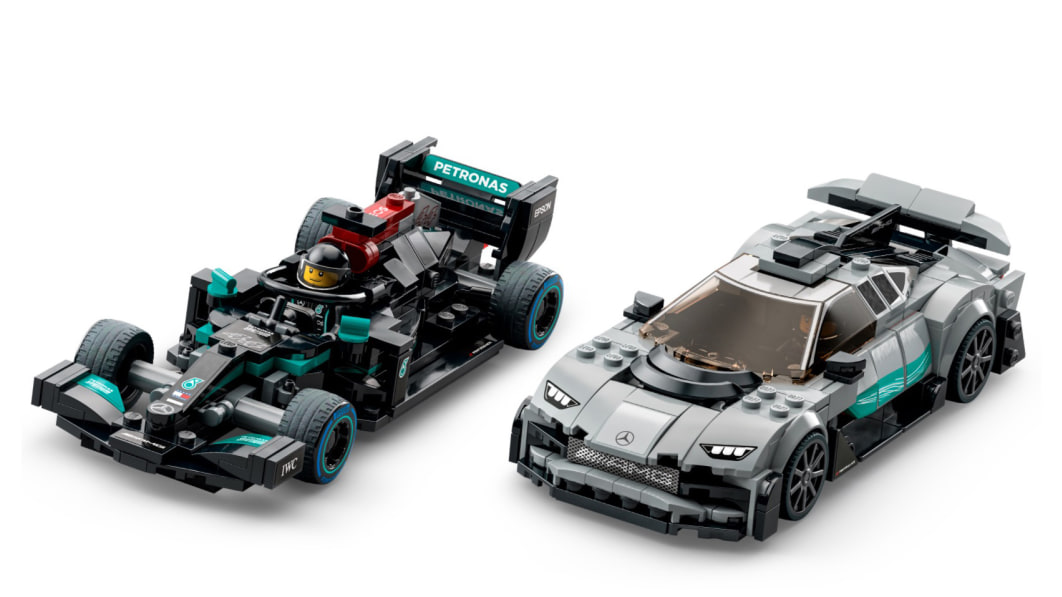 Lego has announced a slew of new Speed Champions sets, the ones based on actual licensed cars, for 2022. The latest batch includes a smorgasbord of supercars, from beloved classics like the Lamborghini Countach to yet-to-be-released promises like the long-awaited Mercedes-AMG One. There are seven cars in total, released in five sets.

Our favorite is probably the 262-piece Lamborghini Countach, based on a later LP500 variant. Not only does it tick the box of a childhood dream machine, but the angular shape of the real-life Countach lends itself well to being recreated in Lego bricks. Also, it’s modeled in white rather than the typical red.

We also really dig the Ferrari 512M. It marked the last of Ferrari’s V12 endurance racers, and even though it was soundly spanked by the Porsche 917, the cars are undeniably beautiful. The 291-piece Lego set does a great job of capturing its brutal wedge silhouette in brick form.

Rounding out the single-car sets is the 247-piece Lotus Evija. The electric Lotus has a bit of a generic supercar look about it, but that’s not entirely the fault of the Lego kit. Its dramatic vents can’t really be replicated with the limited “resolution” of the Lego bricks. Its rear, with unique taillight-encircled air tunnels, is a bit more distinctive.

In addition to the single car sets, there are two larger sets of two cars each. One is a 592-piece Aston Martin-themed pack that includes the Valkyrie AMR Pro and Vantage GT3. Again, it’s a bit difficult to sculpt the cars’ curvaceous lines out of straight-edged bricks, but the effort is admirable. The Valkyrie is probably the more successful of the two, as the Vantage would resemble a Corvette or Viper if it didn’t have stickers to clarify the details.

Last but not least is a twofer comprised of 564 bricks to build the Mercedes-AMG One and seven-time Formula 1 world champion Lewis Hamilton’s W12 racer. In Lego’s official product description the driver is not mentioned by name, but the number 44 gives it away. The model of the One indeed looks like a sharp supercar, but the blocky pieces don’t exactly replicate the lines we’ve seen on camouflaged test mules. The F1 car model looks a bit more like the actual thing, complete with the Petronas livery that graces Hamilton’s steed.

Lego has been doing a great job of immortalizing supercars and classics in brick form in their Speed Champions lineup. Last year saw kits of the McLaren Elva, Koenigsegg Jesko, Toyota GR Supra, Chevrolet Corvette, as well as the Ford GT and Bronco. Their more detailed Technics line has seen vehicles like the Ford Raptor, Volkswagen Camper Van and BMW M1000RR motorcycle.

While the kits look entertaining, we wouldn’t mind if they didn’t skew so heavily towards unobtainably expensive, limited-production vehicles. What kid wouldn’t want a kit of their parents’ Chrysler Pacifica, a Ford Transit Connect to replicate a city scene, or a Mazda Miata for some clean, honest fun? The single-car sets will retail for $19.99, the two-packs for $39.99. All five sets are scheduled for a March 2022 release.