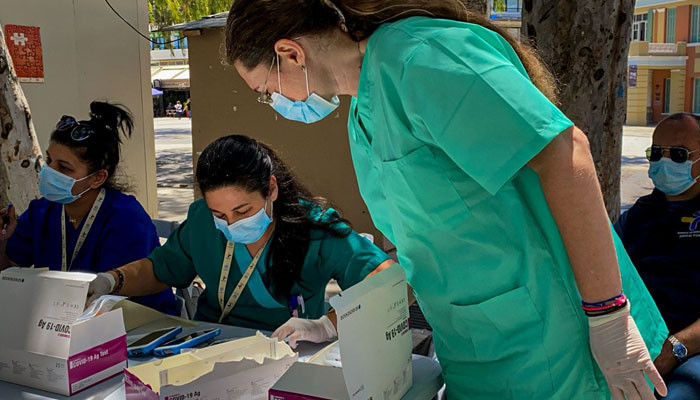 After almost 20 months without international travellers, more than 400 tourists touch down in Vietnam from South Korea and Japan, with arrivals required to show a vaccine certificate and a negative test.

The flights to the southern resort city of Nha Trang come ahead of Vietnam’s plans to reopen the resort island of Phu Quoc to vaccinated foreign visitors on November 20 — with hopes to welcome at least 5,000 travellers in coming months.

Chancellor Angela Merkel calls for a “national effort” to break a fourth wave of coronavirus that is sweeping Germany and again urged people to get vaccinated.

“If we show solidarity, if we think about protecting ourselves and taking care of others, we can spare our country a great deal this winter,” she said, pushing federal and state governments to agree to a threshold for when new measures need to be imposed.

A major Beijing Winter Olympics venue will only let in one-fifth of the spectators it normally holds due to Covid-19 fears, Chinese state media report.

The National Aquatics Centre, the main curling venue, will allow “no more than 1,000 people” — 20 percent of its capacity — to attend 2022 Winter Olympics events.

A US federal court maintains a suspension of the Biden administration’s mandate requiring large businesses to vaccinate employees for Covid-19 by January 4, with judges saying it “grossly exceeds” executive authority.

If upheld, the suspension would represent a major setback to one of US President Joe Biden’s most far-reaching and high-impact efforts to secure the widespread immunisation of American workers ahead of a winter when a resurgence of Covid-19 is expected.

Thousands of protesters in Geneva call on fellow Swiss to vote “no” in a November 28 referendum on a new law that could introduce Covid passes into Swiss life.

An opinion poll earlier this month however predicted a win in favour of the bill.

European planemaker Airbus says the pandemic will have no long-term impact on the need for new aircraft in a market outlook, with its forecast of a global fleet of 46,720 passenger and freighter planes by 2040 barely below a 2019 projection.

The manufacturer also says more planes in the future will be modern, less-polluting models as carriers update their fleets.

The coronavirus has killed at least 5,088,110 people since the outbreak emerged in China in December 2019, according to a tally from official sources compiled by AFP at around 1700 GMT.

The countries with the most new deaths were Russia with 1,241, followed by the US with 832 and Ukraine with 695.