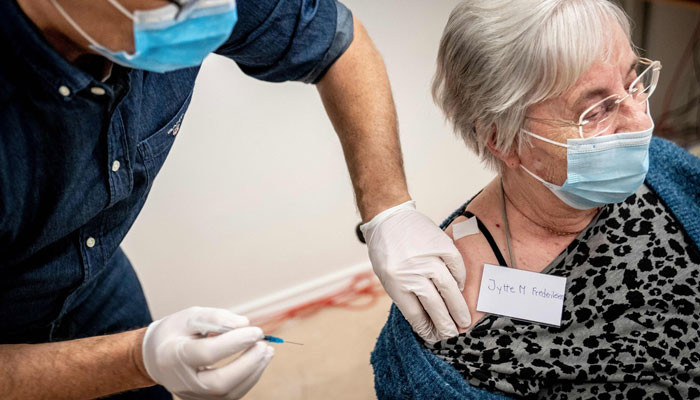 The Danish government says it is bringing back the health pass less than two months after scrapping Covid restrictions as new infections soar.

France’s National Health Authority advises against the use of the Moderna vaccine for people under the age of 30, after a study finds that it slightly increases the risk of myocarditis and pericarditis.

– Romanians urged to get jabs –

The World Health Organization calls on Romanians to get vaccinated even as the fourth wave of the virus there recedes, with only 30 percent of the population fully inoculated.

Most of Russia ends a week-long paid holiday aimed at curbing the spread of the virus even with deaths still at more than 1,000 a day and infections spiralling.

A synthetic antibody treatment developed by Regeneron reduces the risk of developing symptomatic Covid by more than 80 percent for up to eight months, the US biotech firm says.

It claims it could be key for some immunocompromised people for whom vaccines are less effective.

Schoolchildren in large parts of France must again wear face masks in class, less than a month after being allowed to remove them as the country tries to damp down a surge in cases.

Northern Ireland’s health minister Robin Swann is suing veteran singer Van Morrison — a fierce critic of Covid restrictions — for libel over the star’s ferocious attacks on him over the handling of the crisis.

The coronavirus has killed at least 5,047,055 people since the outbreak emerged in China in December 2019, according to a tally from official sources compiled by AFP on Monday.

The countries with the most new deaths were Russia with 1,190, followed by Ukraine with 473 and Romania with 273.

Taking into account excess mortality linked to Covid-19, the WHO estimates the overall death toll could be two to three times higher.