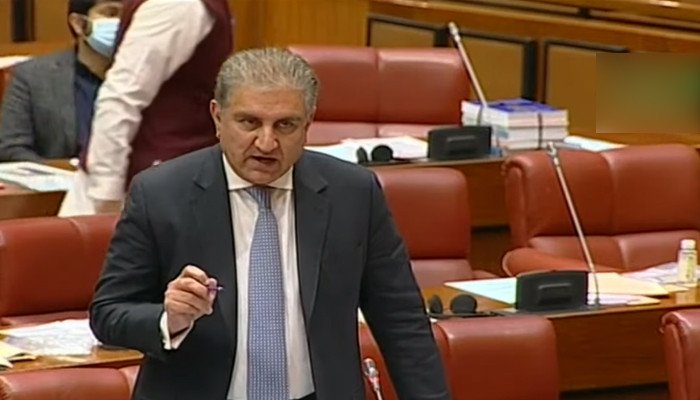 ISLAMABAD: Foreign Minister Shah Mahmood Qureshi lashed out at the Leader of the Opposition in the Senate on Tuesday and called him a “compromised leader” and a “sell-out”.

FM Qureshi issued the statement while speaking in the Senate after Gillani, in his Senate speech on Monday, had said he was being accused by “turncoats” — in an apparent reference to FM Qureshi — of helping the government pass the State Bank of Pakistan (Amendment) Bill.

During the January 28 session, when the SBP bill was passed, 12 members were absent, including Gillani and seven other members of the Opposition, two of the government, and two from independent candidate Dilawar Khan’s group.

Taking a jibe at Gillani for his absence, federal ministers and government officials thanked him for “helping” the Centre pass the crucial SBP bill. In response, the PPP leader announced his resignation from office on Monday.

In his speech today, FM Qureshi said Gillani “lies”, and he will remain “glued” to the office of the leader of the Opposition. “His resignation is nothing but a mere drama”.

The foreign minister said the Opposition leader should explain his absence from the Upper House of the Parliament, as his voters were not satisfied with his clarification.

“He has stated that the bill was [added to the agenda overnight]. How could have the Opposition leader be so naive and unaware?” the foreign minister said.

Commenting on the SBP bill, the foreign minister said it was not right to say that the central bank had been enslaved by foreign bodies. “The State Bank is an autonomous institution.”

‘Didn’t expect him to stoop so low’: Gillani

Talking to journalists after the Senate session, Gillani said he did not expect FM Qureshi to “stoop so low” and termed the foreign minister’s speech against him a “contempt of the Senate”.

He lashed out at FM Qureshi, saying that he had requested to give a policy statement.

“But instead of a policy statement, he started a tirade against me. The foreign minister has lowered his ethical standards without any reason. I did not expect him to stoop so low,” the PPP leader added.

Hours after Gillani announced to step down from his office, PPP Chairman Bilawal Bhutto-Zardari refused to accept his resignation as the leader of the Opposition in the Senate, Geo News reported.

The PPP chairman appreciated Gillani’s services and called them a “shining example” for the democrats and said that the representatives of PPP hold themselves responsible.

Expressing regret over the role of chairman Senate in the passing of the SBP Amendment Bill, 2021, Bilawal said that the chairman passed the bill “in connivance with the government.”