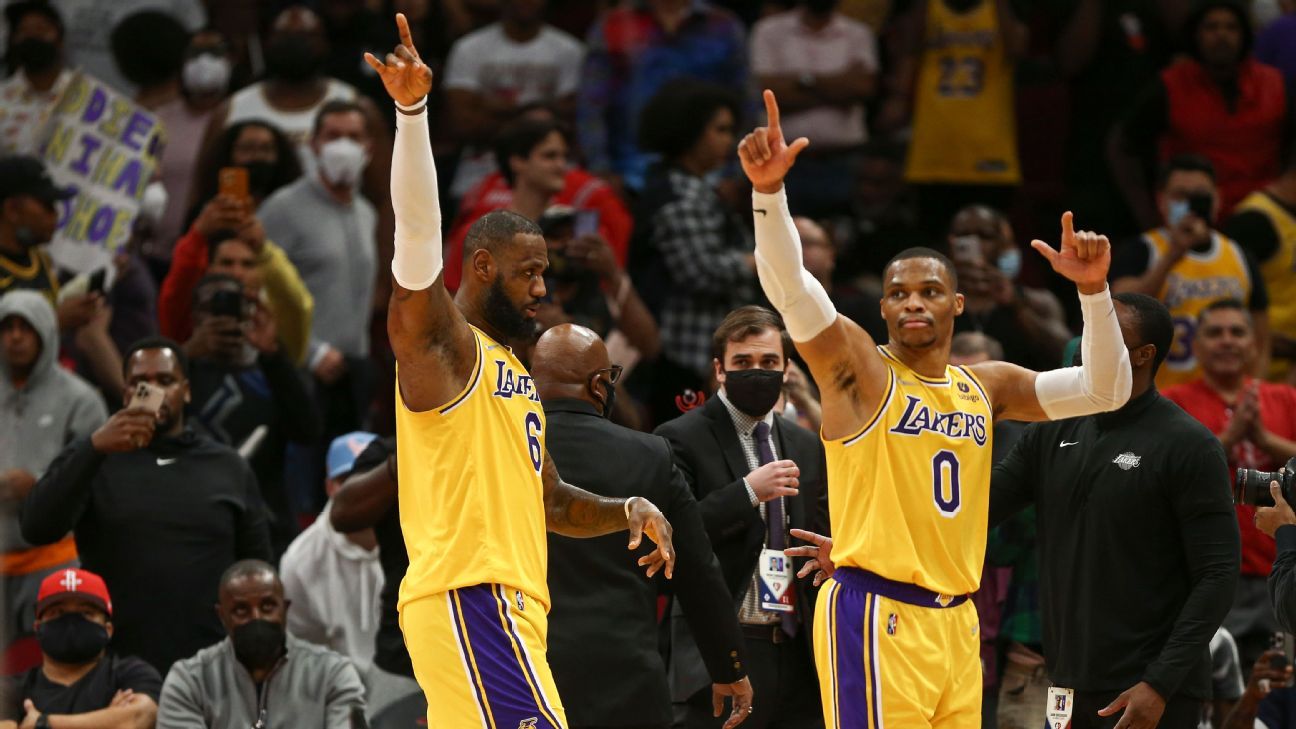 Starting at center for not only the first time of his 19-year career, but for what he said was the first time in his life, LeBron James keyed a 132-123 victory for the Los Angeles Lakers over the Houston Rockets. The win snapped a five-game losing streak for an L.A. team that came into the season with title talk before a slew of setbacks took hold.

“I was a skinny, lanky kid growing up but I was never one of the biggest guys or in the center position,” said the 6-foot-9, 250-pound James, who took the opening tip on Tuesday against Houston’s 6-foot-9 center, Christian Wood. “I’ve always played the wing or kind of handled the ball.”

The Lakers had already experimented with James at the 5 this season — he memorably closed out a game abusing Domantas Sabonis out on the perimeter in an overtime win in Indiana just before Thanksgiving — but had yet to go to it full time.

However, with Anthony Davis sidelined another month because of a sprained knee, Dwight Howard still getting his wind back after a stint in the health and safety protocols and DeAndre Jordan offering uneven production all season, Lakers acting head coach David Fizdale decided to give it a try.

“LeBron’s plus-minus at the 5 is so ridiculous right now,” Fizdale, who is filling in while Frank Vogel is in protocols, said afterward. “To have guys out with COVID and stuff like that, I just took a gamble and said, ‘You know, I think that tonight’s the night to start him at 5.'”

In 1,332 regular-season starts prior to the Houston win, James had never started at center, but L.A.’s desperation, coupled with the positionless trend the league has gone towards in part because of how James’ Miami Heat teams played, created the opportunity.

“I think I’ve taken pride over the course of my career in being able to play five positions. Or at least know all five positions. Knowing the commands,” James said. “So tonight … called for me to start at center and I just tried to be in a hell of a lot of plays.”

He finished with 32 points, 11 rebounds and 11 assists, notching his third triple-double of the season. And he made some history, beyond moonlighting at the 5 for the first time, by becoming the first player in league history aged 35 or above to score 30 points or more in five straight games.

James, who turns 37 on Thursday, edged Michael Jordan, Karl Malone and Elgin Baylor who all hit the scoring feat four games in a row when they were in that age range.

Aiding the lineup swap was a rare on-court practice held by the team Monday before leaving for its Houston-Memphis back-to-back road trip. The session allowed Fizdale to test out James in the middle.

“It was good just to practice, get on the floor,” said Russell Westbrook, who also finished with a triple-double with 24 points, 12 rebounds and 10 assists. We haven’t been able to do that for a long time. … And you’ve seen some of that [pay off] tonight, just how we played in spurts throughout the game.”

Fellow 19-year veteran Carmelo Anthony, who came into the NBA at the same time as James playing the same small forward position, also played the 5 against the Rockets at times when James sat.

“It’s the evolution of the game. You have fives playing on the perimeter now,” said Anthony, who had 24 points and nine rebounds off the bench. “You got to adapt and you got to adjust, and you got to stay sharp, because if you don’t, you’ll get left behind.”

Fizdale, who said Vogel gave him his blessing to try out James at the 5 if he wanted to, did not commit to it being a constant strategy going forward. L.A. will continue to have small ball lineups, but there are still burly big men on opposing teams to contend with and that’s what Howard and Jordan are there for.

But for one night, his instinct worked. And James, already linked to the all-time Laker greats by bringing a championship to the franchise, can now say he played position that Wilt Chamberlain, Kareem Abdul-Jabbar and Shaquille O’Neal did when they played for the purple and gold.

“I just told the team … ‘I don’t think you guys realize what this guy just did,'” Fizdale said. “‘He just played the 5 for four quarters and dominated at the position and played it while playing point guard, while playing [forward], he just… Ah, my gosh, this guy is unbelievable.

“I can’t help it, man. We all are, we’re very lucky as basketball people to get to watch what we’re watching right now out of this man and it’s just beautiful.”