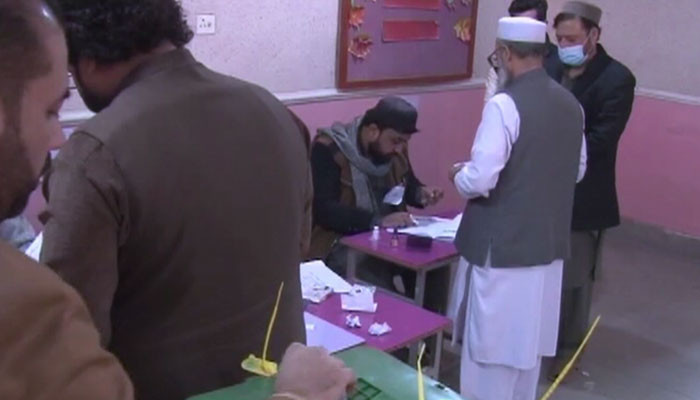 PESHAWAR: The local government elections were held in 17 districts of Khyber Pakhtunkhwa on Sunday amid incidents of violence and rigging allegations.

Over 79,000 policemen and personnel of other security forces were deployed for the polling, which was also held for the first time in erstwhile tribal areas.

Two workers of the Awami National Party lost lives and four wounded in a blast in Kamarsar area of the Bajaur tribal district.

Two people died and three were injured in firing at a polling station at Takht-e-Nusrati areas in Karak district during the polls.

The elections in Bakakhel tehsil in the Bannu district were postponed due to the law and order situation at some polling stations on the night between Saturday and Sunday.

An official of the Election Commission of Pakistan said the polling was postponed after reports of poor law and order by the local administration as well as Khyber Pakhtunkhwa chief secretary.

Polling for the slot of the mayor of Dera Ismail Khan city council was postponed after the assassination of Awami National Party candidate Umar Khitab Sherani on Saturday.

Two cops and a civilian were injured when a police van came under gun attack in the Bajaur tribal district.

The attack was reported in the Mulla Said village in the limits of the Salarzai Police Station.

The cops had gone to a Mulla Said village to enforce discipline at a polling station that was in the disturbance.

Two policemen – Shaukat and Niaz-and a civilian, Samiullah of Dando village were injured in the attack. They were shifted to Khar District Headquarters Hospital and were stated to stable.

One person was injured in the Azad Kashmir village when a firing erupted inside a polling station during the local government election.

The police, however, stated that the cause of the firing was an old feud and they later brought the situation under control.

In addition, clashes were reported from the Tordher village and some other areas. The police handled the situation.

There was a disturbance in Darra Adamkhel town as well where a mob reportedly damaged the polling material and furniture at a polling station.

The first incident took place at the women polling stations established at the Government Girls Primary School Maneri Jahan at Misri Banda Union Council in Jehangira tehsil, where an independent candidate for the general councillor seat Muzaffar Khan along with his supporters forced into the premises, broke six ballot boxes and burnt the ballot papers. The mob also took away some ballot papers.

The second polling station set up at the Government Girls Primary School Pahari Katikhel was attacked by dozens of men who resorted to hooliganism.

A scuffle took place at the Government Higher Secondary School where Federal Minister for Defence Pervez Khattak was also present.

The scuffle involving the candidates running for the general councillor seats was ended under control after the army soldiers and Frontier Corps personnel were called in.

The polling in neighbourhood council 22 Gulbahar in Peshawar was also postponed after clashes between supporters of different candidates who smashed the ballot boxes.

A presiding officer and her spouse were arrested late Saturday night while the polling staff was removed and new officials deputed after reports of wrongdoing at the polling stations in Gor Khatri locality.

A large number of supporters of different candidates staged protests after the videos of alleged wrongdoing by the polling staff went viral.

A three-member committee headed by Special Secretary Zafar Iqbal was constituted to probe the incident and submit a report within seven days.

Many candidates and their supporters protested in different parts of the province over the alleged rigging and slow process of polling at different polling stations.

A total of 2,507 polling stations had been declared most sensitive, 4,188 sensitive while 528 were listed as normal in Sunday’s polls.

In some areas, polling remained suspended for some time after clashes between supporters of different parties but resumed shortly when the cops and other officials intervened.

The ECP officials visited various polling stations in Peshawar, Mardan and other districts to inspect the process of polling.

The IGP told the media that foolproof security arrangements had been made in coordination with other departments for the polls.

In Peshawar, 860 polling stations were declared sensitive, 165 most sensitive while 224 were placed in the normal category.

Around 11,000 policemen and personnel of other forces were deployed for security during polls in Peshawar.

The city police had introduced an app for quick response in case of any law and order during the polling.

“The process mainly remained peaceful as no major incident was reported from the provincial capital. Over 11,000 policemen and personnel of other forces were deployed to maintain law and order,” said Superintendent of Police Saddar Waqar Ahmad.

He said police were alerted to take action in case of festive firing by the winning candidates and their supporters.

According to the ECP, 37,752 candidates were in the run for different categories in the first phase of the polls.

Of these, 689 were in the run to lead the city and tehsil councils while 19,285 candidates were in the run for the slot of general councillors, chairman in village and neighbourhood councils.

Besides, 3,905 candidates were contesting for the seats for woman councillors, 7,513 for peasant councillors, 6081 for youth councillors and 282 for minorities’ councillors.

Meanwhile, Federal minister Shibli Faraz escaped unhurt while his driver was injured as the locals in Darra Adamkhel attacked his vehicle with stones as he was coming to Peshawar from Kohat.

An official said Shibli Faraz was coming to Peshawar from Kohat after casting his vote when locals, who had gathered to stage a protest, pelted stones at his vehicle.

The minister remained unharmed but his driver sustained injuries after being hit by a stone.

Some reports said the attackers fired shots at the car. However, the police dismissed such reports.

“The local police reported that people protesting against the merger of ex-Fata pelted stones at the vehicles,” Inspector General of Police Moazzam Jah Ansari told The News.

The wounded driver was taken to a hospital in Peshawar.