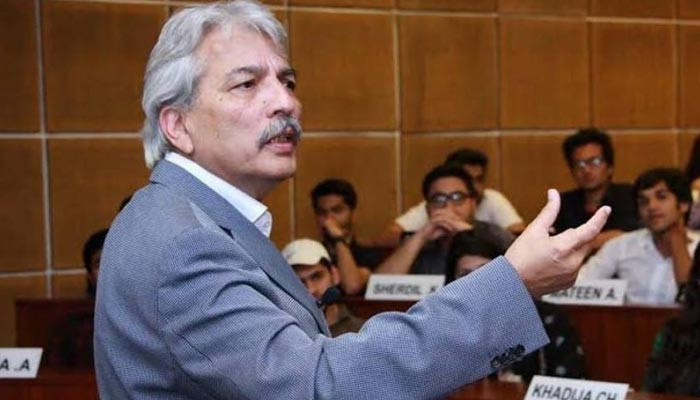 LAHORE: The Federal Investigation Agency (FIA) on Saturday was granted two-day physical remand of PTI’s senior leader Hamid Zaman in a case related to prohibited funding by a district and sessions court in Lahore.

Ahead of today’s hearing, the FIA produced Zaman before the court of Judicial Magistrate Ghulam Murtaza Virk for the charges against him. The FIA pleaded with the court to grant the agency the PTI leader’s 14-day physical remand.

The court, however, granted the FIA a two-day physical remand of Zaman and directed the investigation officer to submit a progress report on the probe on October 10.

“As per the record, Hamid Zaman is suspected of receiving prohibited funding,” remarked the judge.

A day earlier, the FIA took PTI’s founding member Zaman into custody from his office in Lahore in the foreign funding case.

A day earlier, Federal Interior Minister Rana Sanaullah Khan said that PTI Senator Saifullah Sarwar Khan Niazi and another key leader of the party, Zaman, had been arrested in the prohibited funding case after they failed to appear before the Federal Investigation Agency.

“PTI member Hamid Zaman has been also taken into protective custody,” he said.

The FIA had registered a case against Zaman, a trustee of the Insaf Trust, over prohibited party funding. He was arrested from his office on Waris Road, Lahore.

It has been reported that in 2013, Zaman was the secretary of Insaf Trust, which received $625,000 in its accounts. Moreover, the party’s welfare organisation did not meet the rules and regulations.

However, this information could not be verified by independent sources.

Zaman had contested elections from Islamabad on a PTI ticket. He is the chairman of the All Pakistan Textile Mills Association Punjab, North Zone. He is also the co-owner of a famous clothing brand.