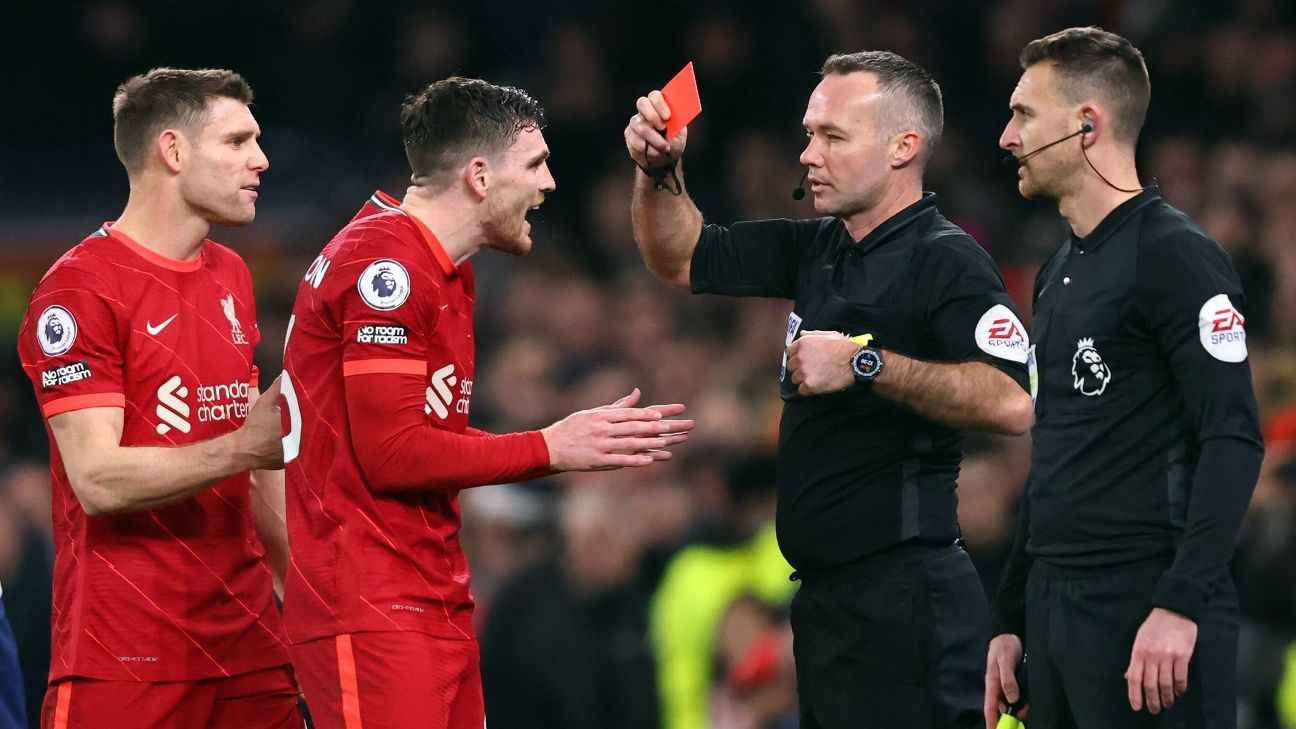 LONDON — Liverpool needed some calm amid the chaos. The Premier League‘s battle to continue amid rising COVID-19 cases across Britain gives every game that goes ahead a heightened sense of unpredictability, and Sunday’s 2-2 draw at Tottenham Hotspur was perhaps the most anarchic example yet.

Usually, it is Virgil van Dijk and Fabinho who inject the requisite composure into Liverpool’s play on occasions such as this. Along with Thiago Alcantara and Curtis Jones, the pair tested positive for COVID in recent days, leading Jurgen Klopp to claim before kickoff that while he was “happy” to play on Sunday, the club will be unable to fulfil fixtures next week if the situation worsens further.

However, although the list of absentees also included Jordan Henderson, who was sent home with a cold, it did not force Klopp into handing 19-year-old academy graduate Tyler Morton his full league debut anchoring the midfield, given Alex Oxlade-Chamberlain was named among the substitutes. Morton looked intelligent in possession and clearly has promise, but he found himself overwhelmed at times as Spurs lined up with Harry Kane and Son Heung-Min up front in a 5-3-2 shape designed to catch Liverpool on the counterattack.

Similarly, without Van Dijk at the heart of their defence, Liverpool looked alarmingly vulnerable to the pace and movement of Tottenham’s front two. There were times when Kane and Son versus Joel Matip and Ibrahima Konate did not look a fair fight.

As Liverpool threatened with typical purpose and poise at one end, Spurs raced forward with exhilarating intensity and danger at the other.

“The challenge today was we played against Tottenham, who set up a 5-3-2, and when they won the ball as deep in their own half, they just kicked it as far as possible and Kane and Son were on their bikes,” explained Klopp. “We struggled with these moments slightly. It gives you some struggles so we had to reorganise our protection a little bit better in the second half.

“It makes no sense that Konate is involved in our offensive passing and Tyler Morton is the one who stands against Harry Kane. That’s not how it should be.”

It made for gripping and unrelenting fare. Kane could easily have been sent off. Andy Robertson was. In between, Klopp was booked for protesting with incandescent rage when Liverpool should have had a penalty for Emerson Royal’s clumsy tackle on Diogo Jota. Later on, Dele Alli felt he should have had a spot kick moment before the visitors’ second goal.

Kane clattered Robertson after 20 minutes and was booked. Robertson went in late and high on Emerson Royal 15 minutes from the end and was booked. Yet Tierney was only asked to review the second decision, upgrading to a red card as a hostile home crowd bayed for Robertson’s dismissal.

“The game would have been completely different with two key decisions in the first half,” said Klopp. “Let’s start with Robbo. We saw it now back and yes, you can give a red card there. It is not the harshest ever but it is not the smartest as well. He is a really good boy but he lost it a little bit.

“But this is the proof that the VAR was there today. Before we thought he might not be in his office because the two other situations, I think we all agree that Harry Kane should have seen a red card and he didn’t. If Andy Robertson’s foot is still on the ground, his leg is broken. I think we all agree on that.

“The penalty situation, Mr. Tierney told me he thought Diogo Jota stopped on purpose. He wanted to get it. If you watch this situation back, it is a very exclusive view. It was a very quick decision. I’m not sure he was prepared for it or whatever.

“How can he react that quick? It was a clear penalty but he thought it was clearly not a penalty. Wow. That is obviously two wrong decisions, I would say, and one right. All three against us.”

Klopp later added in a separate television interview: “I have no idea what [Tierney’s] problem is with me.”

Chaos abounded. It spread to Liverpool goalkeeper Alisson, so often an unflappable individual, but here in among about half-dozen superb saves, he made a dreadful 74th-minute error that ultimately cost his team three points.

It all began so promisingly. Liverpool dominated the opening exchanges with Robertson and Trent Alexander-Arnold both going close before Spurs took the lead with one of those lightning breakaways that troubled the Reds all day. Harry Winks, excellent throughout, won the ball in Liverpool’s half before Tanguy Ndombele played an exquisite through-ball for Kane, who contorted his body superbly to both stay onside and evade Konate before sliding a low finish across Alisson.

Remarkably, it was Kane’s first league goal at home in 788 minutes of play, a run extended across eight matches.

Spurs suddenly began to cut through Liverpool at will. Kane fed Son but the South Korea international couldn’t turn his shot on target. After Kane escaped with a yellow card for that dangerous tackle on Robertson, Son played in Alli for a golden chance to double Tottenham’s advantage. Alisson read his intentions brilliantly to tip the ball wide but Alli should never have given him a chance to make such a fine save.

Spurs rued their profligacy 10 minutes before the interval. Robertson stood up a cross that Jota nodded past Spurs goalkeeper Hugo Lloris for his 10th league goal of the season. Only Everton‘s Dominic Calvert-Lewin and Crystal Palace’s Christian Benteke have scored more headed goals than his six since the start of last season.

Two minutes later, Jota was denied a penalty, taking an already agitated Klopp over the edge. He was booked and television cameras caught Klopp remonstrating with Tierney as the players reemerged for the second half.

Kane had two more chances to put Spurs back in front before Robertson struck, stooping to head home Alexander-Arnold’s driven cross. To add to the litany of contentious decisions, Mohamed Salah was accused by some of a handball in the build-up.

Liverpool’s lead lasted just five minutes as Alisson came out to clear Winks’ forward pass only to miss the ball, allowing Son to roll in an equaliser. Robertson then saw red after Tierney reviewed his original yellow card decision, but Spurs were unable to capitalise on the numerical advantage in the final 13 minutes.

This was an encouraging display for manager Antonio Conte, who is looking to inject greater intensity into a Spurs side that stagnated under Jose Mourinho and Nuno Espirito Santo. More immediately, Tottenham are seeking to emerge from their own COVID-19 crisis that led to the postponement of two league matches and their UEFA Conference League tie against Stade Rennais.

Liverpool’s own journey through similar challenges, will continue three points behind Manchester City, who will be top on Christmas Day with a three-point lead. It is the third time they have occupied first place at this time of year: In 2011-12 and 2017-18, they went on to win the title.

To stop that from happening, Liverpool need to rediscover their poise.