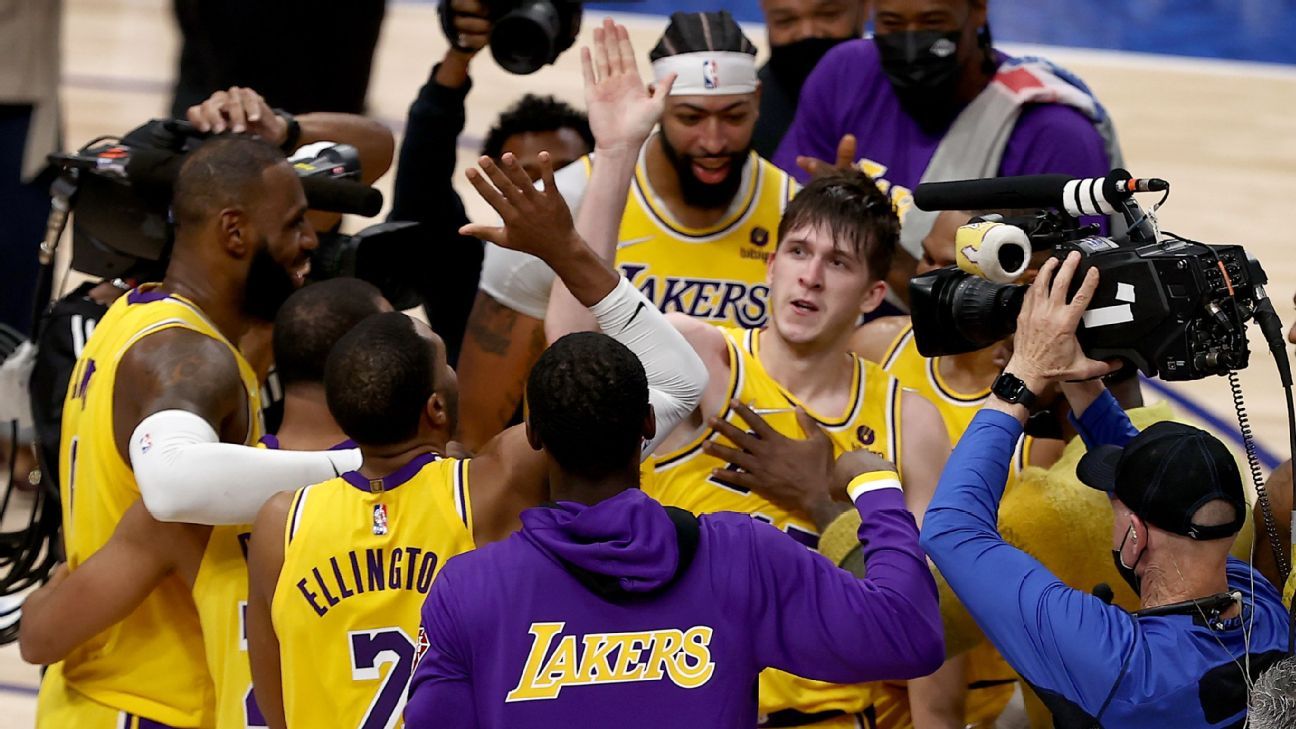 DALLAS — The odds of Los Angeles Lakers rookie Austin Reaves even being in an NBA uniform on Wednesday night, let alone on the court in overtime and trusted to hit the game-winning 3 to beat the Mavericks 107-104, were astronomical.

All 30 teams passed on him on draft night, and the two-way contract he signed with L.A. was only converted to a full-fledged roster spot after the Lakers suffered injuries during training camp.

And while he’d earned coach Frank Vogel’s trust up to this point in the season, the main reason Reaves was logging 9½ minutes in the fourth quarter on Wednesday plus the entire five minutes of overtime was because L.A. had little other choice. Over the past 48 hours, the team was depleted from a string of players and staff members entering into the league’s health and safety protocols.

When Reaves received the pass from Russell Westbrook and let it fly from the right wing with 1.0 second left in the extra session, however, the context was inconsequential. He was a basketball player doing what he has done for as long as he has played the game.

“I mean, it’s basically been the story of my life,” Reaves said afterward. “I’ve always been underrated. Didn’t go to a big high school, so didn’t get recruited much, but at the end of the day, you got to produce on the basketball court and for me to hit that shot, for my teammates to have the trust in me to take that shot is very, very special.”

The shot gave Reaves 15 points for the game, setting a new career high in scoring, and was his fifth made 3-pointer in six attempts. It prompted his teammates, future Hall of Famers and All-Stars among them, to mob the 23-year-old from Arkansas near midcourt after Dallas’ Reggie Bullock couldn’t get his desperation 3 off before the final buzzer.

Anthony Davis put Reaves in a headlock. Westbrook tussled his hair. When the group made it back to the locker room, LeBron James presented him with the game ball, and DeAndre Jordan snuck up behind Reaves to dump a bucket of ice water on the rookie to celebrate.

“Just the genuine nature of the guys,” Reaves said when asked what stuck out about the moment. “You don’t see that much, especially with the type of guys that we have on this team — six Hall of Famers and then all the guys that have been in the league for 10-12 years. So, really just the genuineness of it is just special.

“I’m lost for words. I mean, I’ve grown up watching all of these guys play, so for them to … for me to even just be teammates with them is special.”

It was an outright exhibit of exuberance for a Lakers team that hasn’t had much to feel great about this season. The rash of positive COVID-19 tests that hit the team this week — making Dwight Howard, Talen Horton-Tucker and Malik Monk, as well as assistant coach Phil Handy and play-by-play broadcaster Bill Macdonald unavailable — only seemed to fit that trend.

But with the flick of the wrist, Reaves kept some momentum alive for the Lakers, who have now won six of their past eight games.

“It hasn’t gone as everyone else has hoped it would,” James said of the Lakers’ season, now 16-13 and No. 6 in the West. “It’s gone as how it’s gone. You go out and you play the game and you want to be better. You want to be better every single day. We want to continue to work our habits, continue do what we got to do to be great every night. So, we are who we are as a team. We got a lot of injuries, a lot of mixed lineups. Obviously guys in protocols and false protocols, things of that nature.

“So, we are what we are as a team right now and we like where we’re at.”

James’ answer took on the same matter-of-fact tone that Reaves’ did when asked about James lighting into him in a timeout when the Mavs hit a 3 shortly before his big-time shot.

“The discussion was that I messed up on defense,” Reaves said of the intense conversation. “I didn’t get to the shooter, or whatever. He made the shot. But, I mean, it’s basketball. The other team is trying to achieve something, too. So, things go wrong, things go right, but I don’t think so. I try to just stay level-headed throughout everything regardless of who I’m playing or what teammate I’m playing with. I think it’s kind of just my nature and my mentality is just even-keeled. Never too high, never too low.”

If there has been one high point to this Lakers season so far though, it has been their performance in crunch time. Reaves shot pushed their record in overtime to 5-1.

“Throughout the year, there will be ups and downs, but ultimately, when the game’s on the line, we have guys in the locker room that can make plays at the end of the game,” said Westbrook. “It’s a good feeling to know that, looking to the left and looking to the right, that guys can close and finish games when we need to.”