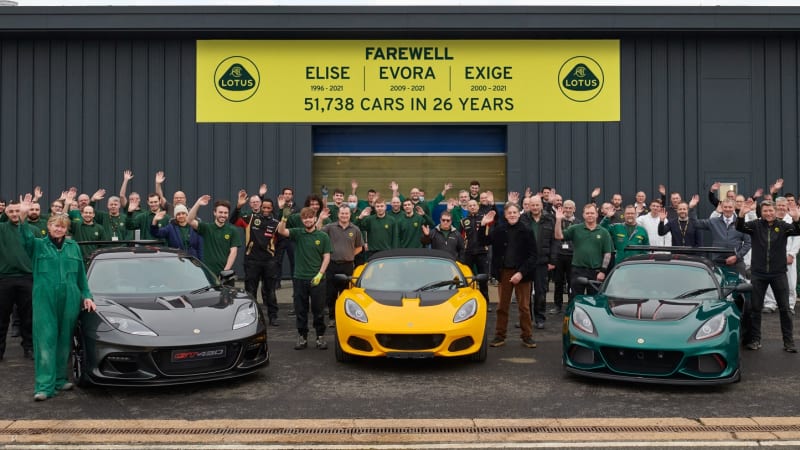 Lotus has closed one of the most important chapters of its history: It has ended production of the Elise after a 25-year run. It also built the final example of the Exige, which was closely related to the Elise, and of the Evora, which was bigger and more comfort-oriented.

We knew that this day was right around the corner, Lotus announced Final Edition variants of the Elise and the Exige in February 2021, and the British company confirmed that it’s keeping the very last examples of the three models for itself. Shown above, the last Elise is a Sport 240 Final Edition model in yellow. The last Exige is a Cup 430 Final Edition finished in British Racing Green, while the last Evora is a GT430 Sport model that wears Dark Metallic Gray paint. All three cars will join the carmaker’s growing collection of heritage models.

Lotus built 51,738 examples of the Elise, the Exige, and the Evora combined over the past quarter of a century. While that doesn’t sound like much, not when Ford sold over 787,000 units of the F-Series in pandemic-ridden 2020, that figure represents nearly half of the cars Lotus has built since its inception. It’s worth noting that this number doesn’t include the Elise derivatives made for third-party companies; the original Tesla Roadster was built on an Elise-sourced chassis, and the Opel Speedster was developed and manufactured by Lotus.

It sounds like the three nameplates have been consigned to the pantheon of automotive history — at least for now. Lotus isn’t standing still, however. Funded by Volvo parent company Geely, it unveiled the Emira, a coupe powered by a mid-mounted engine, earlier in 2021, and it’s planning to launch its first crossover in spring 2022. The soft-roader will be the first in a series of mass-produced electric models from the company. Looking much further ahead, Lotus will also release a sedan and an electric sports car developed jointly with Alpine.