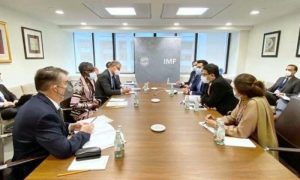 Pakistan and the International Monetary Fund (IMF) have agreed in principle to prolong the delayed bailout programme for up to a year and increase the loan size to $8 billion, providing markets with much-needed stability and a moment of relief for the new government.
The agreement has been reached between Finance Minister Dr Miftah Ismail and IMF Deputy Managing Director Antoinette Sayeh in Washington as per the sources. The IMF has agreed that the programme will be extended by another nine months to one year as against the original end period of September 2022. According to the senior official, the loan size would be increased from the existing $6 billion to $8 billion, a net addition of $2 billion.

Before taking Pakistan’s case to the IMF Board for approval, Islamabad would have to agree on the budget strategy for the next fiscal year 2022-23.

Dr Aisha Ghaus Pasha, who is Minister of State for Finance, State Bank Governor Dr Reza Baqir, Finance Secretary Hamid Yaqoob Sheikh, and Naveed Kamran Baloch, Pakistan’s Executive Director to the World Bank, all attended the meeting with the IMF delegation. An IMF mission is expected to visit Pakistan from May 10 to give the extended programme its final shape. Both sides would strike a staff-level agreement following the satisfactory end of talks!

Previous articlePM Shahbaz and Russia’s Putin exchange letters away from the media glare
Next articleTop US officials meet Zelenskiy, Plans to reopen the Kyiv embassy soon