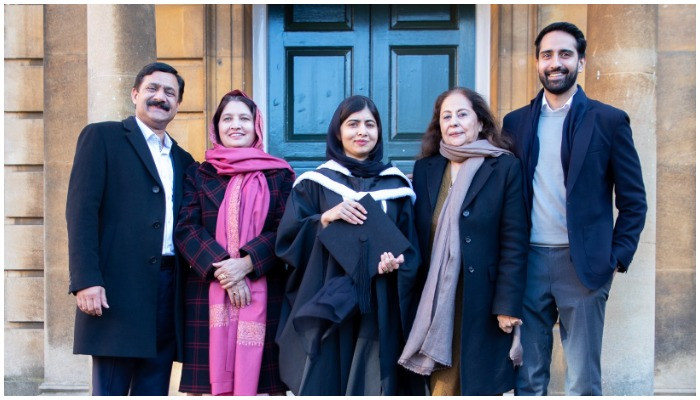 Nobel laureate Malala Yousafzai’s newlywed husband, Asser Malik, on Friday, revealed the place where he first met the girl he will spend the rest of his life with.

Asser, who is a senior executive at the Pakistan Cricket Board (PCB), took to Instagram to share a couple of pictures from Malala’s graduation ceremony at the University of Oxford.

He said that “the place we first met felt a little more special” on the day of Malala’s graduation.

Malala and Asser can be seen together in one of the pictures, while in the other picture, they accompany their parents.

Meanwhile, the new graduate’s father, Ziauddin Yousafzai, also shared some pictures from the ceremony on Twitter.

Ziauddin expressed his “joy and gratitude” while announcing another feather in his daughter’s cap.

“A moment of joy and gratitude. @Malala officially graduates from @UniofOxford,” he wrote.

The youngest Nobel peace prize winner had tied the nuptial knot with Asser during a small ceremony in Birmingham on November 9.

Since her marriage, Malala has appeared in several leading western publications to talk about her experience and why she decided to tie the knot with Asser.

Malala’s father Ziauddin Yousufzai told a reporter that a marriage ceremony will be held next year in either London or Birmingham in which hundreds of guests will be invited.