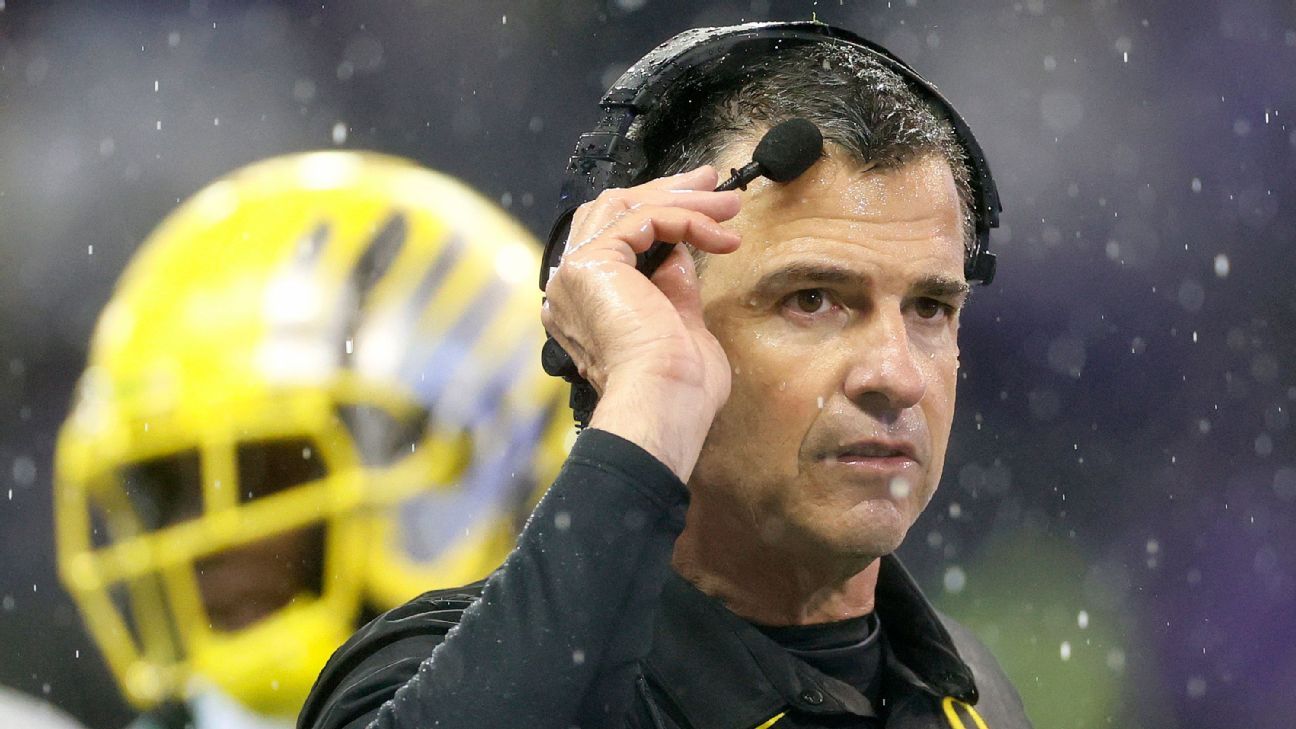 Mario Cristobal is heading home to the U.

Sources told ESPN that Cristobal’s contract at Miami will be in the range of $8 million annually, and that Miami also plans to pay his $9 million buyout at Oregon.

“My family and I are excited to return home to the University of Miami, which has been so instrumental in shaping me as a person, player, and coach,” Cristobal said in a statement. “This program has an unparalleled tradition and an exciting future ahead of it. I can’t wait to compete for championships and help mold our student-athletes into leaders on and off the field who will make our University, our community, and our loyal fan base proud.”

Oregon athletic director Rob Mullens told reporters Monday that Miami never reached out to him to express interest in talking to Cristobal.

“The usual courtesy is to reach out to the institution, and that never happened,” he said.

However, he said he was well aware that Miami was interested in Cristobal.

“We understand that’s the alma mater, that’s home and all the elements that go into it,” he said.

Mullens said that he isn’t sure which assistant coaches will follow Cristobal to Miami. Once that becomes clear, Oregon will name an interim coach.

Cristobal informed Ducks players of his decision at a team meeting Monday in Eugene. Just before the Oregon meeting, Miami announced the firing of coach Manny Diaz and a forthcoming hire of Diaz’s replacement. Cristobal is a Miami native, was a Hurricanes offensive lineman for two national championship teams, and a Miami assistant from 2004 to 2006.

Miami has aggressively pursued Cristobal for several weeks to replace Diaz, and it ramped up its efforts late last week. Oregon presented Cristobal with an enhanced contract offer to remain, which the coach acknowledged after Friday night’s loss to Utah in the Pac-12 championship game in Las Vegas. But Cristobal did not immediately accept Oregon’s offer, which The Oregonian reported was then withdrawn.

“Mario’s legacy as a student-athlete at the U is well established. And the standard for competitive excellence that he and his teammates helped establish is one to which we continue to aspire. Our selection, however, was not one based in nostalgia for a proud past, but rather in a bold vision for a promising future,” Miami president Julio Frenk said in the statement.

“The characteristics that helped Mario excel as a national championship-winning player — drive, determination, and discipline — continue to propel his success as a coach. In Mario we have found a head coach who shares our belief in providing student-athletes with the very best opportunities to succeed on and off the field, and our commitment to winning at the highest level.”

Miami’s next step is hiring an athletic director, and the school continues to target Clemson’s Dan Radakovich for the position. Sources close to the situation expect Radakovich to meet with Cristobal before any decision is made, and an athletic director hire isn’t expected at Miami until midweek at the earliest. Radakovich, who has led Clemson’s athletic department for the past nine years, earned his business degree at Miami and began his career there in athletics administration in 1983.

Cristobal, 51, went 35-13 at Oregon with two Pac-12 championships, a Rose Bowl win two years ago and three Pac-12 North titles. He joined the Ducks staff in 2017 as co-offensive coordinator and offensive line coach, then was promoted to head coach when Willie Taggart departed for Florida State. Cristobal served as Florida International’s coach from 2007 to 2012, going 27-47 overall.

Oregon assistants have been out recruiting for the team but are being informed of Cristobal’s decision. Cristobal spent Sunday recruiting for Oregon and appeared briefly on a videoconference for the team’s Valero Alamo Bowl matchup against Oklahoma.

The Ducks lost a commitment in the 2022 class from ESPN 300 quarterback Tanner Bailey after news broke that Cristobal was leaving.

Bailey is a 6-foot-1, 190-pound quarterback from Gordo High School in Gordo, Alabama. He’s the No. 139 recruit in the country and the No. 6 pocket passer overall. Bailey stayed committed to the Ducks after offensive coordinator Joe Moorhead left to take the Akron job, but opened up his recruitment once Cristobal was gone.

“I didn’t see the Coach Cristobal thing happening, I don’t think any of the recruits did, either. I think the coaches were confident he would stay, but I think at the end of the day, we all know Coach Cristobal and his situation,” Bailey said. “He’s a great husband, dad, coach, mentor, so everyone has a ton of respect for him. I think that decision is best for him being an alumni, his family’s down there, his wife’s family is down there. So, I think that’s the best choice for him and we totally understand it and respect it.”

Bailey said he wouldn’t rule out signing in the early signing period, but it would likely be difficult to make another commitment before Dec. 15.

ESPN’s Paolo Uggetti and Tom VanHaaren contributed to this report.