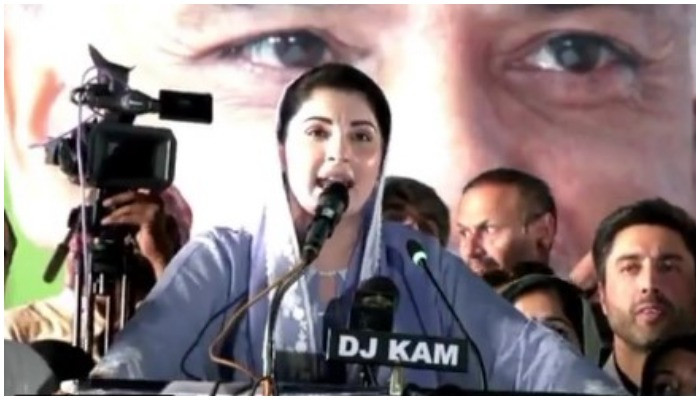 Earlier today, Khan — while speaking during a podcast — had said that he had learned about the “conspiracy” against his government in July last year.

“First he said the threat letter arrived on March 7, and now he is saying that he had known about the conspiracy since last year,” Maryam commented while addressing a jalsa in Attock, Punjab.

Imran Khan had also said that he had no intention to change the director-general of the Inter-Services Intelligence (ISI) as his presence was crucial because of the looming fear of a civil war in Afghanistan.

“I realised last summer that once the US leaves Afghanistan, there could be a civil war that could have repercussions for Pakistan. Our soldiers were being martyred, so I wanted the intelligence chief, who had served for five years already, to stay as it was the most difficult of times,” he had said.

In response, Maryam used a pun and said that Imran Khan’s government “collapsed as soon as it became bey Faiz“.

She also shed light on the alleged corruption charges against former first lady Bushra Bibi’s friend Farah Khan and said that the PTI’s “so-called independence march” is actually a “save Gogi” march.

“Farah Gogi’s corruption trails lead to Bani Gala. It’s unfortunate that Imran Khan never publically tried saving his sister Aleema Khan when there were allegations hurled against her, but he came to Gogi’s rescue while speaking on national TV,” she said.

She said that in the past four years, out of a population of 220 million people, it was only Gogi whose wealth continued to increase.

“Why did Farah Khan escape to Dubai overnight?” she questioned. “Interior Minister Rana Sanaullah has said that Farah will be found and brought back wherever she is.”

She went on to say that it was “Gogi, Pinky, and Kaptaan,” who looted the country’s wealth, adding that Imran Khan minted billions of rupees through the foreign funding case.

The PML-N vice president also shed light on the Masjid-e-Nabawi (PBUH) incident and said that it was an act of “shame” that Imran Khan “had sent people to the holy place to chant slogans against the PML-N leadership.”

She said that due to the incident, many poor people working in Saudi Arabia were arrested only because they listened to what their leader was demanding.