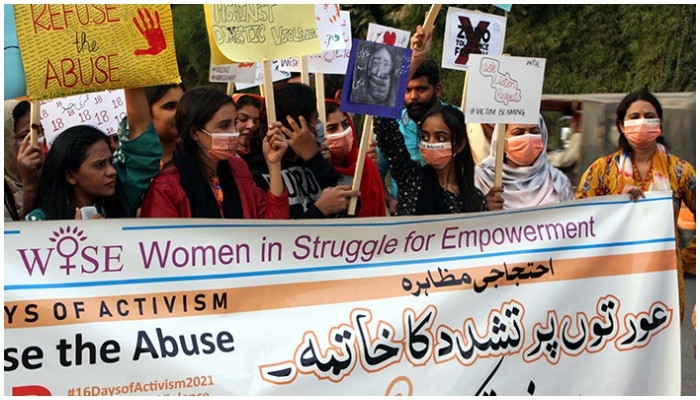 FAISALABAD: Police on Tuesday arrested five men for torturing and stripping some garbage-picking women in a busy market after accusing them of stealing from a shop, Geo News reported.

According to the first information report (FIR), registered by four affected women, they went inside an electric store situated in Millat Town of the city, asking for drinking water.

The women told police that as they entered the shop, the store owner — identified as Saddam — and three of his employees accused them of theft and started beating them.

The victims further told police that while the shopkeepers were beating them, other men from the market also joined and started torturing them.

They dragged the women out of the shop, stripped them naked, and then videotaped the incident, the police said.

Police added that they received a call from area residents after which they immediately reached the site of the incident and arrested the owner of the electric store and three employees working there.

Police added that upon the directives of the Central Police Office (CPO) Faisalabad, a case has been registered against four identified and eight unidentified men for detaining and torturing the women.

‘Women tore off their clothes themselves’: shopkeepers

According to Superintendent of Police (SP) Naeem Aziz, the shopkeepers told police that the women had stolen things from the shop and when they were caught, they started tearing up their own clothes.

SP Aziz said that some of the women could also be seen tearing their clothes in the CCTV footage, while the clothes of the women were further torn while they were being dragged out of the shop.

He said that CCTV footage is being carefully reviewed as part of the investigation, adding that all aspects of the incident will be taken into consideration.