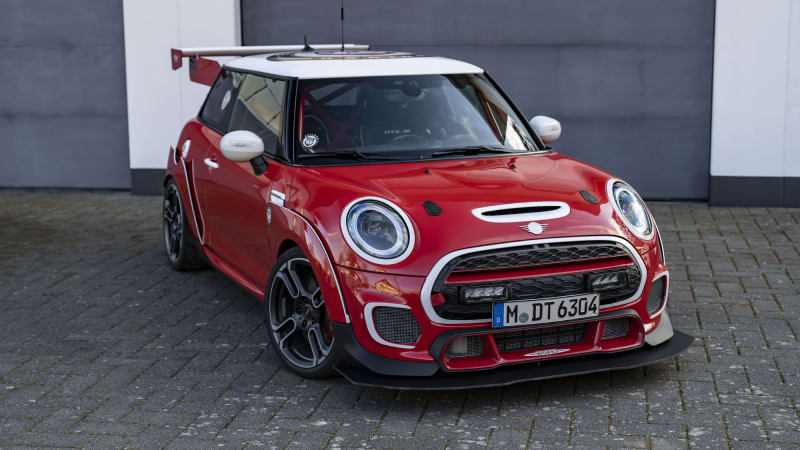 Mini is returning to the Nürburgring 24 Hours, one of the most grueling races in the world, after a decade-long hiatus. The BMW-owned British firm is supporting a private team called Bulldog Racing that’s entering a heavily-modified John Cooper Works Hardtop into the event.

The track-bound hatchback doesn’t look, sound, or feel like a standard John Cooper Works Hardtop. Several modifications were made to prepare it for the race, including fitting the turbocharged, 2.0-liter four-cylinder engine normally found in the Clubman and the Countryman. It develops 306 horsepower and 330 pound-feet of torque, and it spins the front wheels via an eight-speed automatic transmission with an integrated differential lock. For context, the standard John Cooper Works Hardtop is rated at 228 horsepower and 236 pound-feet of torque.

The engine slurps fuel from a bigger, 26-gallon tank and it exhales through a modified exhaust system. Dialing in more power wouldn’t be much use without suspension and braking modifications to keep it in check. To that end, the Hardtop gains an adjustable suspension system, reinforced Uniball bearings for all moving chassis and suspension parts, and more powerful brakes from BMW M Performance.

Bulldog Racing also installed a full body kit that looks like the one worn by the John Cooper Works GP, which is limited to 3,000 units. It includes a front splitter, flares over the wheel arches, an adjustable rear wing, and a rear diffuser. There’s more than initially meets the eye: we’re told that the underbody is completely covered as well. Makrolon windows replace the production car’s glass units to reduce weight.

Inside, you won’t find many components that still carry a Mini parts number. Open the driver’s door, which now features a carbon fiber panel, and hop over the full roll cage to settle into an OPM racing seat that faces a KMP quick-release steering wheel. The digital instrument cluster and, somewhat surprisingly, the infotainment system’s screen remain, but the rear seats and most of the trim pieces have been removed.

Bulldog Racing will continue to fine-tune the track-bound Hardtop in the coming weeks. Some tests will be performed on the Nürburgring, while others will take place on the private test track that BMW operates near Miramas, a town in the south of France. The hot hatch is scheduled to make its competition debut at the 50th edition of the Nürburgring 24 Hours taking place in Germany from May 26 to 29.