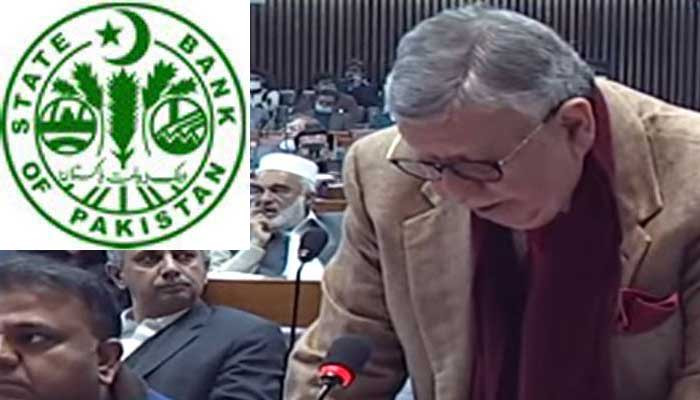 ISLAMABAD: The tabled SBP Amendment Bill 2021 incorporates some highly objectionable clauses, including the exclusion of growth from major objectives, prohibition on government borrowing and abolishing the Monetary and Fiscal Policies Coordination Board.

When the Reserve Bank of India (RBI) made changes in its law in recent years, it took almost three years to finalize it but here in Pakistan, there were no broad consultations done before submitting this proposed bill before the Parliament. Now the ball is in the court of parliamentarians belonging to both Houses of Parliament –National Assembly and Senate of Pakistan — for scrutinizing the SBP Amendment Bill 2021 with minute details irrespective of any political divide and they could approve only those clauses that are good for the country and its economy.

Under the proposed bill clause 9C, prohibition on government borrowing is proposed. It further states that the bank shall not extend any direct credits to or guarantee any obligations of the government, or any government-owned entity, or any other public entity.

After proposing to abolish the Monetary and Fiscal Policies Coordination Board, the Bill under section 9G states that the Governor (SBP) and the Finance Minister shall establish a close liaison through a mutual agreement with each other and shall keep each other fully informed on all matters which jointly concern the Bank and the Ministry of Finance.

This scribe contacted renowned and independent economists of the country for sharing their perspectives on the proposed SBP Amendment Bill 2021. Former Finance Minister Dr. Hafiz A Pasha pointed out five major objections over the proposed bill and said that this bill incorporated in its preamble that the SBP’s main mandate was targeting inflation. How the government would target inflation, he asked and pointed out that the Monetary Policy Committee (MPC) envisaged inflation targeting at 7 to 9 percent for the current fiscal year and then revised upward to 9 to 11 percent. Now the inflation, he said, had touched 12.3 percent, so whether the MPC would further jack up its targeting.

“It has become a joke,” he said. He said in a country like Pakistan, there should be a focus on the combination of growth as well as targeting inflation. The Annual Plan was approved by the National Economic Council (NEC) and Governor SBP could be made an ex-officio member of this constitutional forum of NEC whereby the macroeconomic targets were finalized every year just ahead of the budget announcement.

He said the proposal to impose a prohibition on government borrowing from the central bank was the most dangerous clause because what would happen in case of any disaster, catastrophe or even eruption of war with any external country.

“There have been explicit provisions for any disasters like situations where the government could use financing from the SBP,” Dr. Pasha added. He said that the government made excessive borrowing from the central bank in the past and there should be a limit on it but complete prohibition on borrowing would serve no purpose.

Dr. Hafiz Pasha said that there was an issue of seigniorage as poor countries plunged into monetization of economy and they had estimated that a country like Pakistan, it could be done to the tune of 1 percent of GDP as our country could print money to the level of Rs500 to Rs550 billion.

He further pointed out that he had convinced the prime minister in 1997 to incorporate the Monetary and Fiscal Policies Coordination Board in the SBP’s Amendment Bill as it was a good forum where all relevant economic ministries, including Minister for Commerce, Planning and Finance as well as SBP officials, could sit together for ensuring coordination among the monetary and fiscal policies. He raised the question of what would happen if monetary and fiscal policies would be moving in different directions. If so, it would serve no purpose.

Dr. Khaqan Najeeb, former Adviser, Ministry of Finance, said that moving towards operational and administrative autonomy is the right direction for a well-functioning central bank. While commenting on the State Bank autonomy bill, he said that retaining the Fiscal and Monetary Board is essential for coordinating Pakistan’s Fiscal and Monetary policies. It is imperative that the two policies work in tandem.

Dr. Khaqan, while commenting on the SBP inflation targeting clause, stated that it can surely be strengthened. He explained that the clause should be more focused and clarified that a key objective of SBP is to manage domestic price stability guided by the medium-term target set by the government. He felt secondary legislation is required to clarify which inflation is being targeted (CPI or core inflation).

He felt that a secure term of governor and others from 3 to 5 years, is a good move. However, there should be no possibility of extension. This would let the incumbents focus on the job at hand without political influence.

Dr Khaqan felt clause of zero borrowing by government from the SBP should be reconsidered as zero borrowing at the end of a quarter or a fiscal year. He concluded that the accountability mechanism of not delivering on targets also has to be clearer — submission of a mere report in parliament is not enough. Simultaneously, parliamentarians need to play a more active and responsible role in holding the SBP accountable.