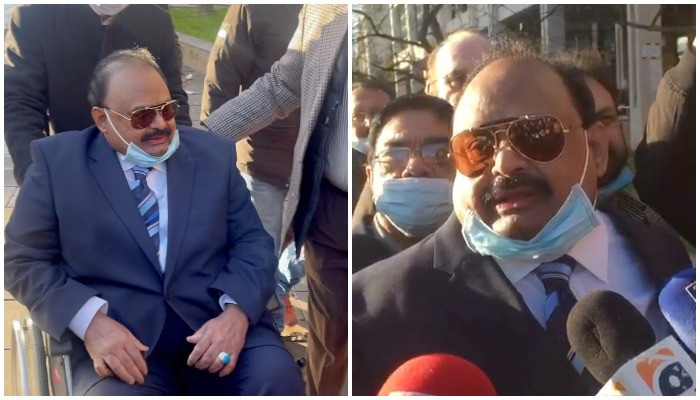 LONDON: The Muttahida Qaumi Movement (MQM) supremo Altaf Hussain took a dig at the break-away faction of his party by saying that he enjoyed popular support when the Karachi chapter of the party still operated under him, prior to the August 22, 2016 speech, for which Hussain is standing the hate speech trial.

On the first day of his trial, Hussain attended the court with a large number of his colleagues at the Kingston-upon-Thames crown court. Nothing much happened in the court as the jury is likely to take oath on Wednesday and the prosecution will set out its case before a jury of 12 which will ultimately decide the outcome of the charge.

Hussain arrived at the court in a Range Rover, driven by his legal advisor Adil Ghaffar. He was accompanied by Mustafa Azizabadi, Suhail Khanzada, Nasir Ali, and other members of his MQM-London faction. He entered the court in a wheelchair.

Inside the court building, Altaf held discussions with his lawyers and appeared relaxed.

Hussain avoided talking about the charge against him and said that he cannot comment on the sub-judice matter on the advice of his lawyer and sent a message of peace and goodwill to all.

He avoided going harsh on his former colleagues in Karachi but said the people of Karachi and Sindh “can see what’s happening under MQM-Pakistan.”

He suggested that “MQM-P doesn’t have the support of the Urdu speaking communities.”

He said “things were different” under him and “on a single call, members would take action” which is no more the case after MQM broke into several factions.

Asked about the incitement of terrorism charge and what his defence will be, Hussain said that he had been “through a lot of stress and difficulties in 45 years of his political struggle but he never lost hope.”

“Allah has always given me strength to deal with the difficult times”.

He added: “I have always remained steadfast and I have never felt despondent during the worst of times. I will call on my supporters not to pay attention to any rumours and stay strong and united in these trying times. Allah helps when there are greater objectives in front of you and you rise to these challenges.”

In June 2019, the Met Police’s Counter-Terrorism Command charged Hussain under section 1(2) of the Terrorism Act (TACT) 2006 with encouraging terrorism.

The charge, as stated by the UK police, said: “On 22 August 2016 published a speech to crowds gathered in Karachi, Pakistan which were likely to be understood by some or all of the members of the public to whom they were published as a direct or indirect encouragement to them to the commission, preparation or instigation of acts of terrorism and at the time he published them, intended them to be so encouraged, or was reckless as to whether they would be so encouraged.”

As part of the same case, Hussain’s lawyer had told a judge at the Old Bailey that Hussain was upset on 22 August 2016 and agitated at the way Geo News and two other channels — Samaa and ARY – censored his speeches and did not provide him coverage prior to Hussain’s August 16, 2016 address. Altaf Hussain denies the charge and his legal team has said it will defend him during the trial.