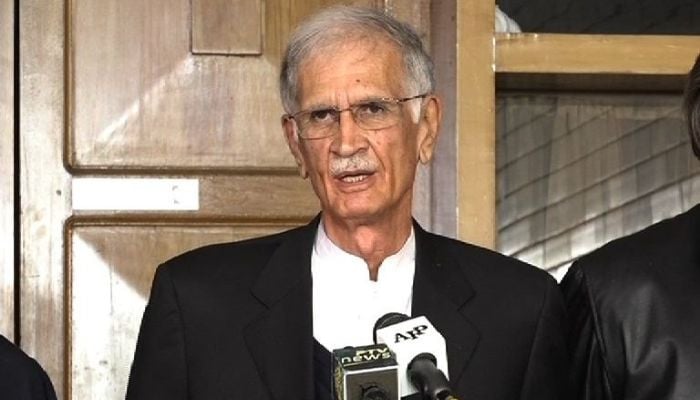 Defence Minister Pervez Khattak has said there should be no link between the Sialkot mob’s lynching of a Sri Lankan man and the government’s decision to relax the ban on the Tehreek-e-Labbaik Pakistan (TLP).

The minister, speaking to the press on Sunday, said “murders take place” when emotions run high in young people.

The minister was addressing the media in Peshawar amid widespread outrage in the country after a mob of hundreds of protestors tortured and burned the body of a Sri Lankan factory manager, Priyantha Kumara, over blasphemy allegations on Friday.

A reporter asked Khattak if the government was planning “solid action” against groups such as the TLP to prevent future incidents like the one in Sialkot.

To which Khattak asked, “When you were in college, were you also not emotional?”

“Everyone has a different mindset; a mob gathered and someone chanted a slogan related to Islam that led to such an incident,” Khattak added.

The minister admitted that he can also make a mistake when overcome by emotions, but added that such instances did not mean “Pakistan is on the verge of catastrophe.”

The reporter then asked the minister if he was linking the alleged killings of nine police officers by TLP protesters, as well as Kumara’s, to “emotions”.

Khattak immediately shifted the blame to the media, declaring, “Why don’t you change this mindset? Youngsters fight and murders take place [at times]. It is the job of the media to inform the youth.”

“The media only accepts advertisements and makes money,” an irate Khattak claimed.

On November 2, the government began implementing the accord with TLP, with reports suggesting that it had released more than 800 supporters of the party arrested across Punjab.

A week later, on November 7, TLP ceased to be a proscribed organisation after the government accorded approval to the Ministry of Interior’s summary asking for its removal from the First Schedule of the Anti-Terrorism Act, 1997.

TLP was placed in the said schedule in April 2021 on the recommendation of the Punjab home department.

So far, a total of 132 suspects have been arrested in connection with the Sialkot lynching case.

In particular, Sikandar kept gathering people on the factory’s rooftop and inciting the attack, Shehzad was armed with a stick and Zohaib was involved in planning to provoke others for violence, the spokesperson said.

He said that the latest arrests have been made with the help of CCTV camera videos and mobile phone data. Interrogation of the arrested suspects has started, he added.

Speaking about the progress in investigations of the case, 26 suspects were found to have played a key role in the gruesome murder.

He said that CM Buzdar and the Punjab inspector-general of police are continuously monitoring the investigations and process of the identification of arrested suspects is underway.