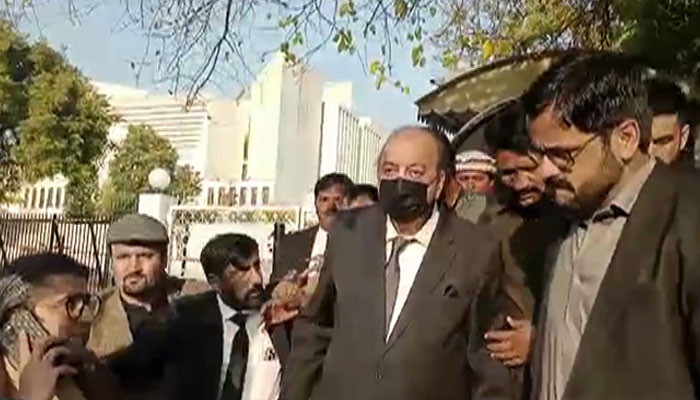 ISLAMABAD: The National Accountability Bureau (NAB) arrested the Sindh Assembly speaker and PPP leader Agha Siraj Durrani on Friday after the Supreme Court directed him to surrender before the bureau, for allegedly accumulating assets worth of Rs1.6 billion beyond means, after rejecting his plea of not arresting him from the premises of court.

A three-member bench of the apex court, headed by Justice Umer Ata Bandial, heard the bail application of Speaker Sindh Assembly Agha Siraj Durrani in a reference filed by the NAB. During the course of hearing, Justice Umer Ata Bandial observed as to how they could hear the bail before arrest application of the appellant without him first surrendering before the anti-graft body.

Justice Sajjad Ali Shah, another member of the bench, while addressing the counsel for Agha Siraj Durrani, told him that an order of the high court against his client was already in the field. “He should have been in jail and why should we give your client special concession,” Justice Sajjad Ali Shah told Siraj’s lawyer.

Aamir Raza Naqvi, counsel for Agha Siraj Durrani, however, submitted before the court they had surrendered themselves before the apex court, therefore, they should be allowed to approach a trial court bail. He contended that the apex court was empowered to suspend the order of high court. “I submit an affidavit that instead of arresting from the premises of apex court, my client will surrender himself in Sindh,” the counsel pleaded to the court. “We know our powers where we could exercise it and where not,” Justice Sajjad Ali Shah told the counsel of Agha Siraj Durrani.

Justice Umer Ata Bandial, while addressing the counsel, observed that now a new law has come wherein a forum for seeking bail has been settled. “You have challenged before us the order of high court but you should first surrender before the NAB as we have already given you the concession,” Justice Bandial told Siraj’s counsel adding that they will not interfere in the NAB’s affairs.

During the hearing, counsel for NAB, informed the court that their team remains outside the residence of Agha Siraj Durrani round the clock but it was not being allowed to enter his house. Justice Bandial, however, observed that it was NAB’s own concern.

Meanwhile, the court ordered Agha Siraj Durrani to surrender himself before the NAB authorities after rejecting his plea of not arresting him from the court premises and adjourned his bail application until next week. After the court’s order, Agha Siraj Durrani was arrested outside the Supreme Court.

It is pertinent to mention here that the Sindh High Court had rejected the bail before arrest application of Agha Siraj Durrani in assets beyond means case. After cancellation of his bail from the high court, Agha Siraj Durrani remained at large and on Friday he appeared before the apex court in-person seeking bail.

The NAB had issued his arrest warrants. According to NAB, Agha Siraj Durrani had accumulated assets worth of Rs1.6 billion through illegal means. The NAB had also alleged Durrani of buying properties in the names his servants worth of millions of rupees. Durrani’s assets included luxurious vehicles and watches.

“Due to unwarranted intervention of NAB, not only the economic activities of the country have come to halt but the state institutions were also unable to function effectively,” he said. The PPP chairman said that NAB was being used as a tool by the PTI government, adding, “Accountability is a democratic process but political victimisation under the guise of accountability will turn out to be disastrous for the democracy.”