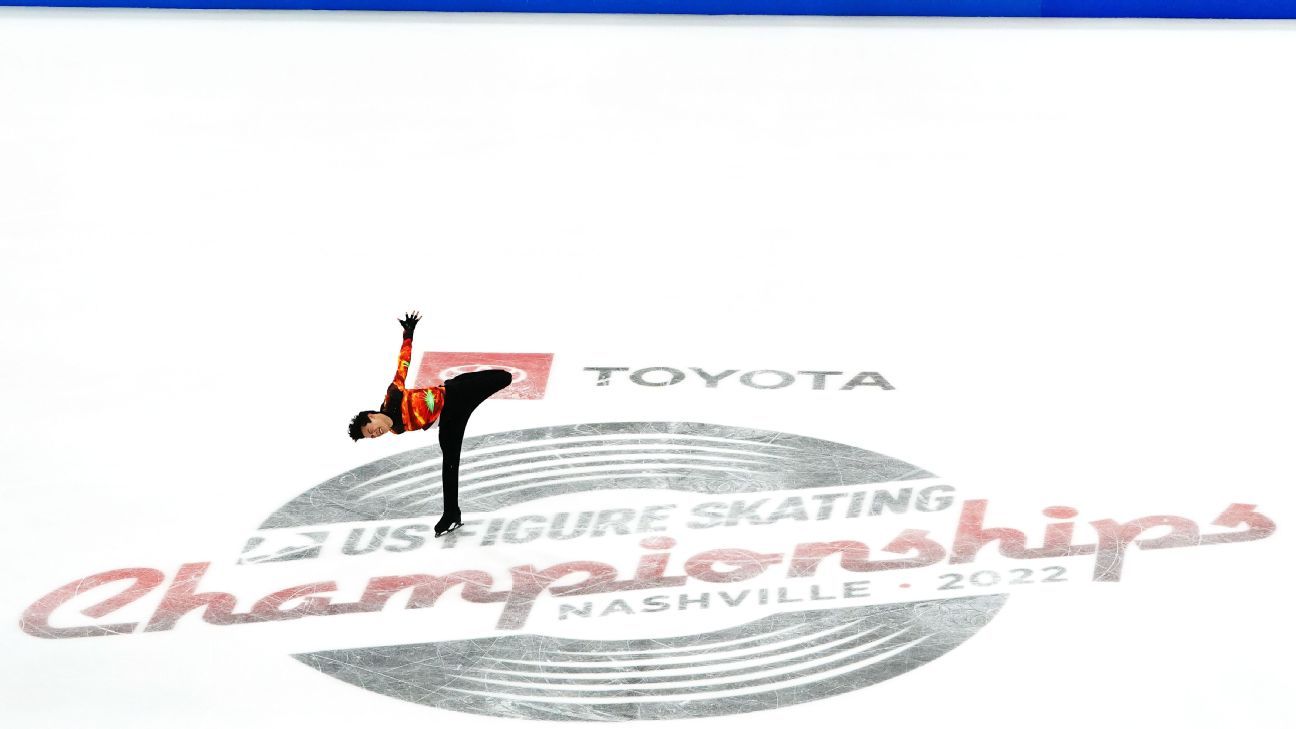 NASHVILLE, Tenn. — Nathan Chen had landed some of the most difficult jumps in figure skating, soaring through the air with a dizzying array of quads and flawlessly stringing together incredible combinations that left the crowd wanting more.

Figures that he would faceplant on a simple step sequence.

It didn’t matter, though. Nor did a mistake on one of his four quadruple jumps. Chen was that much better than everyone else at the U.S. Figure Skating Championships on Sunday, winning the free skate with 212.63 points and scoring 328.01 in all — good for his sixth consecutive title by nearly 26 points over 17-year-old wunderkind Ilia Malinin.

“Silly things happen all the time. Am I to expect that? Probably not,” Chen said with a smile and shrug. “It was a dumb little moment. I just got wrapped up in that moment and lost my footing. It is what it is. Make sure I don’t do that again.”

Chen’s six titles are the most since Todd Eldredge won his sixth in 2002, and he is the first to win six in a row since two-time Olympic champion Dick Button won seven straight in the 1940s and 1950s.

Vincent Zhou followed an exceptional short program with a calamitous free skate Sunday, barely edging Jason Brown for third place and putting his spot on the U.S. team for Beijing in question.

It has been a remarkable four-year run for Chen, 22, since a shockingly poor short program at the Pyeongchang Games cost him a shot at an Olympic medal. He won 14 consecutive events, from national titles to world championships and everything in between, before losing to Vincent Zhou at Skate America in October.

That turned out to be a blip: Chen won Skate Canada the very next week.

He underscored his readiness for Beijing when he broke his own national record in the short program, a throwback performance of his “La Boheme” program from a couple years ago that featured a pair of soaring quads and scored 115.39 points.

Then Chen put his readiness in all caps with his performance in the free skate.

Wearing a costume adorned with a supernova, Chen blasted off to another level with a score that beat his own Grand Prix best this season of 307.18 points. And it topped the 322.36 points his biggest rival in Beijing, two-time Olympic champ Yuzuru Hanyu, scored in winning the Japanese national title last month.

Malinin, whose parents both skated for Uzbekistan at the Olympics, had a three-point lead after the short program over longtime fan favorite Jason Brown, whose odyssey getting to Nashville — five canceled flights, four airline changes, three airports, two countries and about 33 hours of traveling — made him a winner regardless of his performance.

The self-proclaimed “quad god,” Malinin hit a huge opening quad lutz and quad toe loop to set the tone for his program. He also hit a quad salchow later in the performance to finish second with 302.48 points.

“Even though I’ve trained for this moment and knew i could do the best I possibly could, I was surprised by how easily everything went together,” Malinin said. “It all came together. And I’m just really excited for this moment.”

Brown gave it everything he could to make the Olympic team.

Known far more for his artistry than his jumping ability, Brown fell on an opening quad salchow during his program set to haunting music from “Schindler’s List.” But he rallied to land the rest of his jumps, including two triple axels, to finish with 289.78 points — less a point behind Zhou’s quad-heavy program.

“It’s been a really tough go to get here, and I don’t mean that in just the last 72 hours,” Brown said. “The last two years especially, it was really trying times. And just trying my best to stay grounded, focus on what I can control, and I finally had that moment of release when the program was over.”

Sixth at the 2018 Games, Zhou showcased during nationals the kind of soaring quads it will take to challenge Hanyu and the rest of the high-flying Japanese team for the top podium step in Beijing. He just didn’t land enough of them.

Zhou stepped out on his opening quad lutz, hit his next three quads and then fell apart with a fall on his second quad lutz — a jump he kept falling on during warm-ups. He also fell during his triple axel-double toe loop combo later in the program.

“The simplest, most honest answer is that I was so nervous my body just froze up on me,” Zhou said.

If he makes the team, Zhou is one of the few American athletes who could have family in the Olympic crowd. Foreign fans are barred from attending, but Chinese citizens will be allowed to buy tickets. Zhou’s parents, both computer scientists in Silicon Valley, moved from Beijing when he was young, and all four of his grandparents still live in China.

Yaroslav Paniot had a rough go, too. The young skater had the crowd rocking with his Elvis-inspired free skate then earned their admiration when he tried gamely to go on following a problem with his skate. He ultimately had to withdraw.