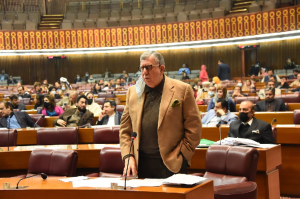 On Thursday, the National Assembly passed the Finance (Supplementary) Bill 2021, also known as a “mini-budget,” despite considerable resistance from opposition parties. The lower house session resumed at the parliament house in Islamabad with Speaker Asad Qaisar in the chair.
Prime Minister Imran Khan, Planning and Development Minister Asad Umar, Defence Minister Pervez Khattak, and Foreign Minister Shah Mahmood Qureshi also attended the important session.
Shahid Khaqan Abbasi, a former prime minister, and PML-N supporter bombarded the government with many questions and has said that kindly let it be known in Parliament why there was a need to propose the mini-budget? Why are you imposing such a large additional tax load on the people? Rather than stating what will become more expensive, why not tell us what will not? Fuel and electrical costs, he noted, had both increased.
Bilawal Bhutto Zardari, the PPP Chairman also criticized the PTI Government and pointed out that the current Finance Minister claimed he didn’t understand the uproar over the mini-budget. We request him to visit the streets of Karachi and question the people about their economic condition. The finance minister and the prime minister both break their promises. Inflation had reached double digits, and the debt-to-GDP ratio had risen dramatically. He stated that this is what Naya Pakistan has provided.
The Finance Minister responded to the PPP chairman and said that they blamed PTI for sacrificing the country’s economic sovereignty and national security but they went to the IMF approximately 13 times. Did they forfeit our economic sovereignty each time? While Speaking in the house, Finance Minister Shaukat Tarin rejected the hue and cry of the opposition parties on the finance supplementary bill. He said the government decided not to withdraw exemptions of taxes on basic items such as milk, bakery items, laptop, baby food, and solar panels.
The government introduced changes to Clause 3 of the bill, under which small shops will not be taxed on bread, chapattis, sheermal, naans, vermicelli, buns, and rusk. Tier one retailers, restaurants, food chains, and sweet shops will be taxed on the sale of these items.
The amendments further include the Tax on imported vehicles to be increased from 5% to 12.5%, a 2.5% duty will be charged on locally manufactured 1,300 cc vehicles, which was previously around 5%. The duty on locally manufactured 1,300 to 2,000cc cars was also reduced to 5% from 10%. A 10% duty will be imposed on locally manufactured cars greater than 2,100 cc.
No sales tax will be imposed on iodized salt and red chilies.

Ukraine-Russia Crisis: Top US and Russian Diplomats See No Breakthrough At Their Ukraine Talks