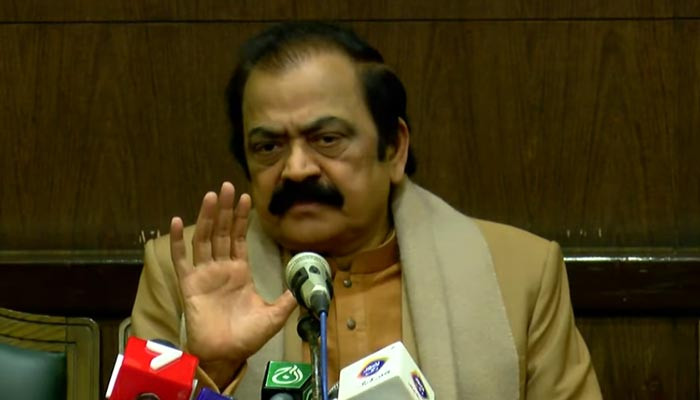 Former prime minister Nawaz Sharif is not ready to be a part of any deal or movement or to enter into such discussions, PML-N leader Rana Sanaullah said Thursday, adding that he believes the statement given in this regard a day earlier by the military’s spokesperson.

Director-General Inter-Services Public Relations Maj Gen Babar Iftikhar had a day earlier categorically rejected the impression there was “a deal” in the works with PML-N supremo Nawaz.

“I believe DG ISPR’s statement and also back it […] if there’s such a situation, then I am not aware of it. Only Allah knows what happens behind closed doors,” he said during a press conference in Lahore.

Sanaullah said Nawaz had instructed the party to build a narrative that every institution should operate within the parameters of the Constitution of Pakistan.

As he rejected the notion of any deal with Nawaz, the military’s spokesperson, in a press conference, had said: “I will only say this about the issue — that it is all baseless speculation.”

“If someone speaks about such a matter, I would request you to ask them who is striking a deal. What are the specifics? What is the evidence that someone is out to make a deal?” Maj Gen Iftikhar asked.

He said there is no such thing going on and reiterated that if someone does talk of it, they must be asked for details.

“In my understanding, I am very clear on that, this is all absolutely baseless speculation, and the lesser we discuss it, the better for the country,” he added.

On the former prime minister’s return to the country, the PML-N leader said Nawaz would make an announcement himself. He rejected speculations of Leader of the Opposition in the National Assembly Shahbaz Sharif holding a meeting in Rawalpindi.

“Shahbaz Sharif has never been, and neither will he ever be ready to become a part of any deal,” Sanaullah said.

The veteran politician said once some “obstacles” are removed, Nawaz could become the prime minister for a fourth time.

He added that Nawaz has always been the premier for PML-N.

‘Throw’ Imran out of PM House

Hitting out at the government, the PML-N leader said the report of the Election Commission of Pakistan’s (ECP) scrutiny committee has “proved that Imran Khan and PTI hid illicit money”.

In the next phase, Sanaullah said, the ECP would reveal which companies and people funded PM Imran Khan and PTI. “He has also received funding from anti-Pakistan people,” he alleged.

The PML-N leader said the time has come for people to “throw” PM Imran Khan out of the Prime Minister House, as he expressed concern over the rising prices of commonly used items.