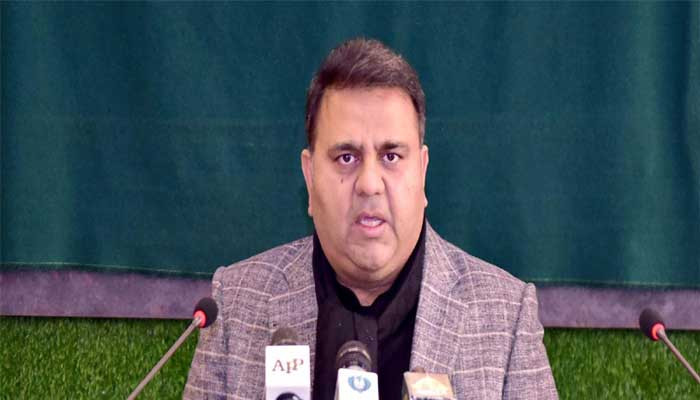 ISLAMABAD: Federal Minister for Information and Broadcasting Chaudhry Fawad Hussain Tuesday ruled out chances of PML-N supremo Nawaz Sharif coming back to the country on his own, and asserted that the government would bring him back.

“We will bring back PML-N leader and former prime minister Nawaz Sharif because he himself will never return,” he said during his media briefing on the federal cabinet meeting, presided over by Prime Minister Imran Khan, and replying to questions from reporters.

The minister said on the issue of Nawaz Sharif’s return, matters had been settled with Britain to a great extent. “In the last two years, we have been addressing the legal lacunas relating to the matter. Rest assured, he will not return, but we will bring him back,” he said emphatically.

About PML-N leader Ayaz Sadiq’s claim about Nawaz Sharif’s return, he said that his statement caused a setback to Jati Umra [resident of Sharif family] which wondered what he was talking about.

Fawad said the cabinet meeting approved formation of a joint investigation committee (JIT) to probe the murder of Nazim Jokhio.

He said the cabinet approved the National Security Policy (NSP) and the policy documents would be made public in 10 days. He pointed out that the economic strategy had also been included in the national security policy and that security could not be guaranteed if your economy was not strong.

The minister said that an important point of the policy was that if the common man was not protected, or he was not satisfied with his economic, social and legal status, then no policy would be successful; therefore it is economy-centric. He contended that the policy was started in 2014 and it was approved in 2021. In the past, the policy was not approved because there was no consensus.

He said that for the first time a government was in place which was capable of soliciting the views of all, and Imran Khan is a prime minister who is trusted by all.

The minister said that the policy also included the policies of internal security, food security and other ministries.

He came down hard on the opposition and said Maulana Fazlur Rehman had been giving dates for three years against the government and recalled when the PTI came to power, the Maulana came to Islamabad in the first year of government with ‘leftovers’.

The minister said he thought he would overthrow the government, but had been giving a new date every three months; the media should bring out his statements of three years. He emphasised that the opposition was not capable of toppling the government, as it required leadership which they did not have. “They are only issuing statements to appease their workers. Everybody knows that Imran Khan gave them toughest time while in opposition,” he noted.

Fawad continued that there were daily-wage politicians in the opposition and they earn their wages. He pointed out that after Rana Shamim’s affidavit, it became clear how big Sicilian mafia Nawaz Sharif & Company is. “They want to get the cases decided in their favour by putting pressure on courts,” he added.

Regarding reports of a ‘mini budget’, the minister emphasised that it was not a mini budget but the government was making some financial adjustments. “We have to go to IMF after what Nawaz Sharif and Zardari have done to Pakistan,” he added.

He advised the opposition to come up with an alternative to the “mini-budget” instead of merely issuing statements. He added that a bill in that regard would be passed in the current session and it had been initially discussed in the cabinet meeting.

There are reports the cabinet would meet again on Wednesday to further deliberate on the proposed ‘mini-budget’ and accord approval to it prior to being taken up in the Parliament for consideration and adoption.

The minister said the cabinet meeting was briefed on urea production; agriculture has improved in the last two years, wheat, rice and sugarcane production has become historic, due to which purchase of vehicles, medicines and other items have increased.

He said that now there is a crisis of shortage of fertilizers, the price of fertilizers in the world market has increased by 12 per cent, gas was supplied for urea production in Pakistan even in these two months when gas is not supplied to the urea plant.

Fawad claimed that Pakistan had the highest production of urea this year: At a time when the price of urea in the world market is more than 10,000, the price of urea in Pakistan is between Rs1700 to 1800. He added that urea was in short supply in many places due to hoarding and smuggling.

The cabinet, he noted, asked the Punjab government to stop stockpiling of urea, which would not reduce the price but would end the shortage.

The minister said that the appointment of Board of Directors of House Building Finance Company Limited has been approved on the recommendation of the Ministry of Foreign Affairs, which will include Shehzad Naqvi, Faiza Kapadia, Yasmeen Lari, Adnan Ali and Imran Ahad.

The forum has given in-principle approval to the draft for the Intermediate Board Coordination Commission to enhance the verification of documents, liaison and cooperation among all the boards of education. Likewise, an approval has been given to appoint Muhammad Asim as executive to the Pakistan Electronic Media Regulatory Authority (PEMRA).

He said that Citizen Building F-9 Park was being converted into Gandhara Heritage and Culture Centre and the committee would be headed by the prime minister. He said that Ms Nazia Shaheen and Shabar Abbas had been demanded by the Italian government to be taken into custody for their alleged involvement in a murder in Italy: They will be sent back to Italy.

Fawad said that similarly the UAE had demanded taking Muhammad Usman into custody and action was being taken to send him to the UAE.

He said that on the recommendation of Lahore High Court, approval has been given to shift Banking Court No. 1 from Multan to Dera Ghazi Khan.

Fawad said that approval has been given to set up a 200 million gallon water plant in Gwadar, this is a CPEC project and it will enable the citizens of Gwadar to get clean water.

The minister said that approximately Rs23 million worth of goods, including N95, safety shoes, and dresses, had been approved for Cuba to prevent the spread of the coronavirus.

He said that the cabinet has sent the draft of Pakistan Planning and Management Bill 2021 to the committee on the recommendation of the Ministry of Planning.

Addressing the joint media briefing along with Federal Minister for Information and Broadcasting Chaudhry Fawad Hussain, the NSA said after the National Security Committee’s endorsement of the NSP, the cabinet approved it. He said: “I would like to congratulate the entire nation on this successful endeavour because if any country has unclear National Security vision then policy making under it is very difficult.”

He said: “Strong economy would ensure more spending on military and human security.”

He underlined that for external initiatives, the Policy’s objective was “Peace”.

“Search for peace in the neighbourhood and all other countries,” he added.

“Therefore, the policy aspects of national cohesion should revolve around the nation’s diversity.

“All aspects of diversity would be taken along with other elements of NSP,” he elaborated.

Dr Moeed, while pointing at criticism over absence of private sector, academia, and experts, said since 2014, over 600 Pakistani experts hailing from academia, universities, students and private sector were engaged who provided their key input for creating the NSP.