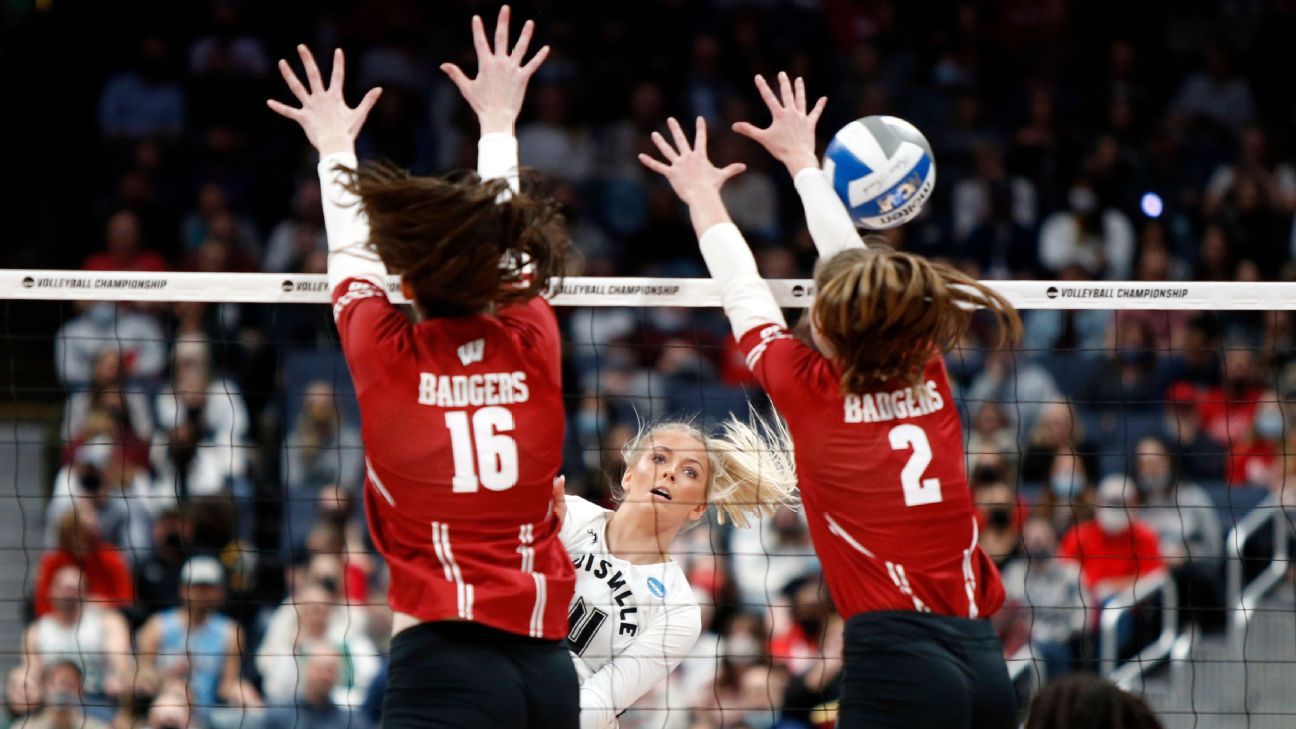 “We want a white banner,” Sheffield said. “We’ve been close. We’ve been painfully close. And that’s something that I think is driving everybody, is we want into that exclusive club that they are certainly VIPs in.”

When it comes to women’s college volleyball, both programs are VIPs. Nebraska and Wisconsin lead the sport in attendance and passionate fan bases. Many fans have come here to see volleyball’s last showdown in 2021 as the Huskers and the Badgers meet on ESPN2 at 7:30 p.m. ET Saturday in the NCAA final.

It will be the second national championship match this calendar year, as the COVID-19 pandemic pushed last season’s NCAA women’s volleyball tournament to the spring instead of its normal December home. Kentucky made a breakthrough in April, becoming the first SEC team to win the title.

But eight months later, this season’s championship will be decided by two programs that have been here many times and represent the Big Ten, one of the two conferences that have largely owned this sport at the collegiate level.

The other power broker is the Pac-12, but no teams from that league made the volleyball final four for the first time since 2015. It’s just the third final four without a Pac-12 team since 1998. While this final four was the first to have two ACC teams, both No. 1 seed Louisville and No. 3 Pitt fell in the semifinals.

On paper, the No. 4 Badgers and No. 10 Huskers pulled upsets Thursday. But with the experience and talent on both teams, getting this far is no surprise. It guarantees what will look like a “red-out” at Nationwide Arena on Saturday, with corncob hats among the Nebraska fans and Cheesehead hats among those from Wisconsin.

“We both probably have two of the biggest facilities in the game, and it’s packed every night,” said Wisconsin middle blocker Dana Rettke, who on Friday was named the American Volleyball Coaches Association national player of the year. “Probably two of the most fun facilities to play in. Those fans are going to be making their way over here.

“I think that’s really special and a testament to the game of volleyball and just how knowledgeable both fan bases are.”

This is Nebraska’s 16th final four and 10th championship game. Nebraska won its second title — and current coach John Cook’s first — in 2000 against Wisconsin. Cook was in his first season then as head coach of the Huskers, having returned to Nebraska in 1999 after seven seasons running Wisconsin’s program.

Cook previously had been an assistant at Nebraska from 1988-90 and spent the 1999 season there preparing to be the handpicked successor to legendary coach Terry Pettit, who retired after that season. Cook felt he couldn’t pass up going back to Nebraska.

But despite ending a perfect 2000 season 34-0 with a 3-2 win over the Badgers in the NCAA final, Cook mostly just felt glad the discomfort of facing his former team was now in the past. He had recruited many of the Badgers’ players, and remembers none of them would talk to him at the 2000 final four.

Cook’s subsequent three titles — 2006, 2015 and 2017 — have been more fun for him: two came in Omaha, Nebraska, about an hour’s drive from the Huskers’ campus in Lincoln, and the other was three hours away in Kansas City. But Nebraska fans travel everywhere, and the volleyball team is the pride of the whole state.

The Badgers have been in the final four five times, including the past three years. Rettke and fellow fifth-year seniors Sydney Hilley and Lauren Barnes played in the NCAA final two years ago — losing to Stanford in straight sets — and lost in the semifinals last season to Texas.

The Badgers were 18-0 and the No. 1 overall seed last season but fell flat in the sweep by the Longhorns. With the blanket eligibility exemption enacted last season for all players because of the pandemic, a program legend like Rettke has gotten a fifth year and another chance.

Same goes for Nebraska middle blocker Lauren Stivrins, the only current Huskers player who was on the 2017 national championship team. This is her sixth season overall with Nebraska, having redshirted in 2016.

Either Stivrins will get her second championship or Rettke her first on Saturday, while volleyball should get a strong title match. The Badgers beat the Huskers twice during the regular season, but both are peaking at the perfect time.

Success, of course, is part of the popularity of both programs in their communities, but that doesn’t explain all of it.

“They’re college towns,” Cook said of Lincoln and Madison, having been head coach in both cities. “Young girls can go and see these phenomenal role-model female student-athletes. But there’s still also the older generation that started when nobody was going, because I still see the same people I saw when I was coaching [at Wisconsin]. And, of course, I still see the same people when I was an assistant at Nebraska still coming to our matches.”

Sheffield said Nebraska was one of the schools that proved early on what could be possible with college volleyball’s popularity, a movement that his Badgers have inspired as well. Wisconsin’s five-set thriller against Louisville on Thursday was proof of it.

“It is an unbelievable sport,” Sheffield said. “And when it’s played at the highest level, I just don’t think there’s anything more compelling than that. I think [Thursday] night was one of the most compelling matches you’ll see.

“I wouldn’t be surprised if tomorrow night isn’t the most-watched volleyball match in history.”