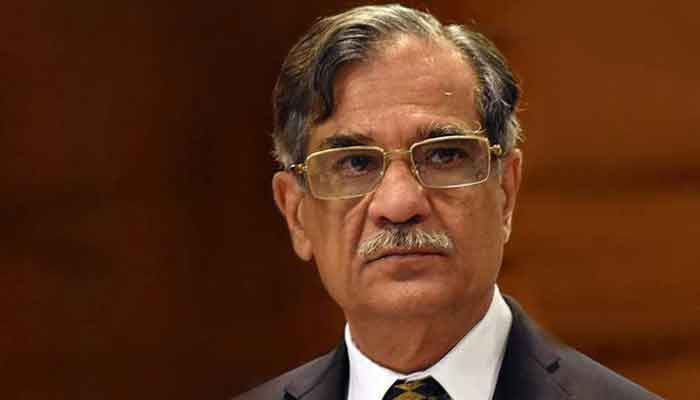 ISLAMABAD: The ongoing controversy regarding the leaked audio clip, allegedly featuring the voice of former chief justice of Pakistan Saqib Nisar, took a new turn after a private channel got a forensic analysis of the controversial clip done by an American company. As per the US company’s findings, the clip was doctored and made up of multiple clips.

An audio clip allegedly featuring former CJP Nisar’s voice had surfaced last month, in which he purportedly told another person that former prime minister Nawaz Sharif and his daughter, PML-N leader Maryam Nawaz, would have to be punished to make space for [Prime Minister] Imran Khan in politics.

Nisar, however, had refused to accept that it was his voice and termed it fabricated. “The audio clip is being falsely associated with me,” he had stated.

The forensic report issued by US company Primeau Forensics stated that changes in the tone of the person speaking in the audio clip in question were observed multiple times.

According to the report, the person can be heard speaking from a distance in the first 25 seconds of the clip, while in the last 20 seconds, he is speaking from near the recording device, which shows that some of the 45-second clip was recorded in one place and the other at a different place.

The report further stated that Primeau Forensics holds 30 years of experience in forensic analyses of audio clips and videos and has conducted forensic investigations of 5,000 videos, audio clips, and pictures. It has provided expert opinion to local, governmental, and federal courts in 500 cases and American TV channels, Associated Press, and other big agencies are among its clients.

When asked about senior journalist Ahmed Noorani’s news report, which claimed the audio clip is not fabricated, the forensics company stated that the clip comprises bits taken from more than a single source, recorded in two different environments.

Speaking about the development to a private TV channel, former top judge Nisar said: “Thanks to the Almighty that the truth has been revealed today.”

Meanwhile, Noorani has said that the “propaganda in Pakistan continues” as the news channels who had “refuted” his news story in the first place are continuing to do it.

“My story on Saqib Nisar audio was based on a forensic analysis conducted by a credible US firm. The forensic firm was threatened by thousands of people from Pakistan to change the report but they always confirmed that they worked with Fact Focus,” Noorani tweeted.

No one ever tried to contact him to get the audio clip he had with him, Noorani lamented.

Noorani went on to say that he is all geared up to issue the Pakistani news channels a legal notice for “spreading lies” if they run a news story against him or his story in the United Kingdom or the US.

‘Continuity of forgery by PML-N’

Adviser to the Prime Minister on Accountability and Interior Mirza Shahzad Akbar, meanwhile, said while speaking to APP that a reputed forensic audit company had confirmed that the audio leak of former CJP Justice Saqib Nisar was made up of multiple audio clips, which is a continuity of forgery by the PML-N and its attack on different institutions.

He said that a private TV channel has conducted good investigative journalism.

The adviser said the PML-N attempted to take advantage of the Calibri font, audio leak, and affidavit of former chief judge of Gilgit-Baltistan Rana Shamim. “They [PML-N] do not answer to the basic query and attempt for forgery and falsification,” he added.

“Maryam Nawaz calls for her acquittal on the basis of this audio clip but they don’t present anything [evidence] before the court because they understand that they will get punishment if they did so in the same way they presented the [documents written in] Calibri font,” he said.

He said journalist Ahmed Noorani should be questioned about this audio release.