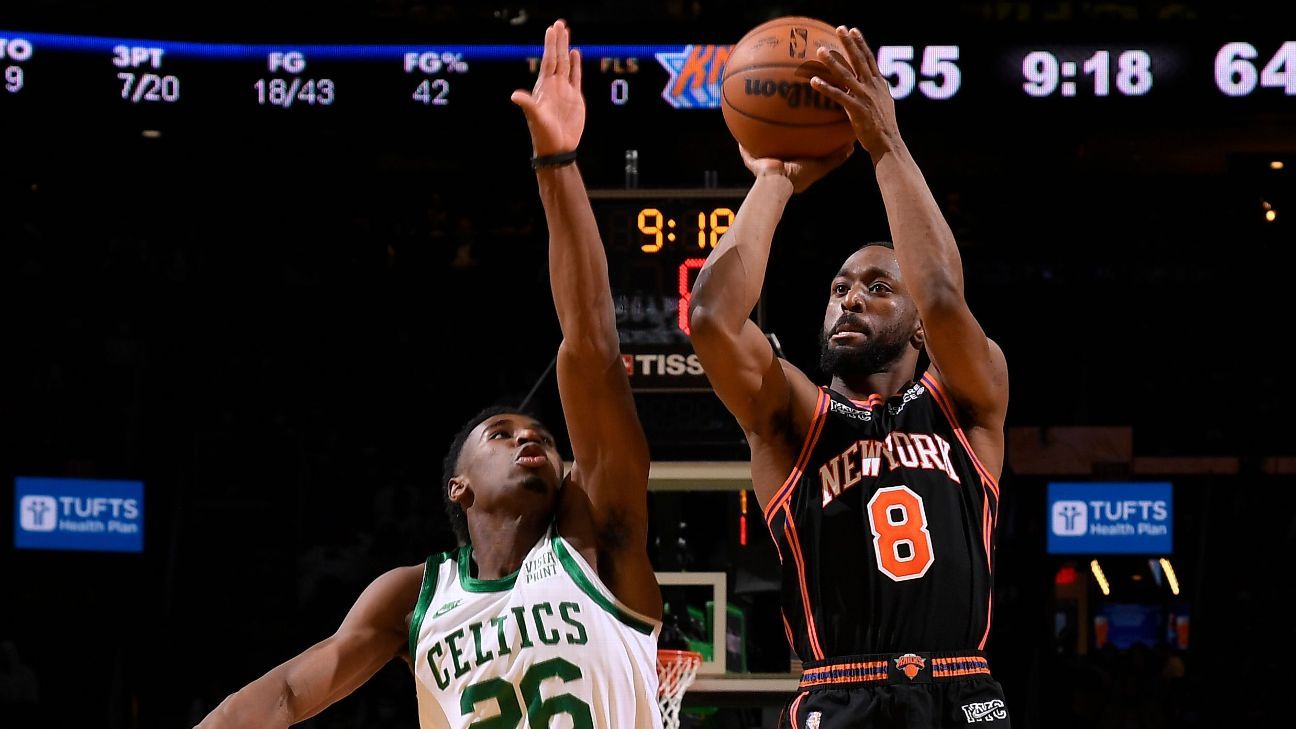 BOSTON — It took the New York Knicks being without nine players for head coach Tom Thibodeau to end Kemba Walker‘s removal from the team’s rotation after nine games.

Walker had an electrifying return to the court, finishing with 29 points in 37 minutes against the Celtics, but he ultimately fouled out with just over two minutes to go, and the Knicks went on to lose 114-107 to their Atlantic Division rivals on Saturday.

Afterward, Walker was asked whether he wants to remain with the Knicks. He said he only has one goal: to be on the court.

He added: “I don’t know what the future holds, you know? I do feel like I have a lot to give still. I don’t know. That’s up to these guys.”

Interestingly for Walker, Saturday night turned into somewhat of a revenge game for him against both teams: against the Celtics for trading him away this summer — the night marked Walker’s first game in Boston since the trade — and against the Knicks, and specifically Thibodeau, for removing him from the team’s rotation three weeks ago.

Walker, who hadn’t played since a loss to the Phoenix Suns on Nov. 26, nearly stole the show with a banner performance. He particularly shined in the third quarter, when he poured in 17 of his 29 points to put New York in front for the first time after an ugly first half.

It was a reminder of what the Knicks hoped they were getting from Walker after signing him this offseason, and also of what he provided during his eight seasons with the Charlotte Hornets and through much of his first season with Boston (15-15).

Walker said it felt good to make a statement on the court after spending so much time on the bench.

“I know I should be playing, so no question. It feels great,” he said. “But whatever situation I’m in, I’m gonna stay locked in, stay prepared. Whatever the team needs from me, I’ll be there for them.”

The shot that put the Knicks in front for the first time Saturday night midway through the quarter was a quintessential Walker play: bringing the ball up on the break and stepping into a pull-up 3-pointer that hit nothing but net. And, after doing so, Walker and the New York bench erupted into a huge celebration as Celtics coach Ime Udoka called timeout.

And while he said it felt great to be back in Boston, where he received a big ovation from the TD Garden crowd before the game, his night came to an untimely end when he fouled out late after Evan Fournier stayed down after a drive at the other end of the court.

“I was told to foul,” Walker said with a shake of his head. “I’m not gonna lie: I didn’t know I had five. But I heard them on the sideline, they told me to foul. Very, very unfortunate situation, but that’s what I was told to do.”

Thibodeau wasn’t in a mood to talk about much after the loss, including Walker.

Walker only got a chance to play once Thibodeau essentially had no other choice. He was the only available point guard Saturday after Derrick Rose was ruled out with ankle soreness and six players — Immanuel Quickley, Miles McBride, Quentin Grimes, RJ Barrett, Kevin Knox II and Obi Toppin — remained in the league’s health and safety protocols.

When asked if Walker’s performance could change his mind about leaving him out of the rotation once the Knicks get healthy, Thibodeau said, “We’ll see. You’ve got to look at everything in totality.”

While Thibodeau had been repeatedly asked about playing Walker since removing him from the rotation on Nov. 29, he offered little reason as to why he wouldn’t go back to him.

“It’s a tough decision to make, but you always have to do what you think is best for the team,” Thibodeau said that day in explaining his decision. “I view Kemba as a starter, and so it’d be tough to play three small guards together. I gave it consideration, and I’ve got great respect for who Kemba is as a person and all he’s accomplished in this league.

“But I have to do what I think is best for the team.”

Things have not worked out the way either Walker or the Knicks envisioned when the New York City legend agreed to a two-year, $20 million deal to return to his hometown after first being traded, along with a first-round pick, by the Celtics for Al Horford to Oklahoma City during the offseason. He agreed to a buyout with the Thunder.

But what was a good story in New York quickly turned sour after the Knicks hovered around .500 through the first few weeks of the season and Thibodeau opted to make a lineup change. New York’s starting lineup had struggled mightily, despite playing more minutes together than any five-man group in the league, and the veteran coach opted to remove his veteran point guard as a way of improving things.

In Thibodeau’s eyes, starting Alec Burks in Walker’s place meant he couldn’t play Walker, Rose and Quickley — three small guards — together off the bench. In practice, however, it didn’t work out the way he would’ve hoped. After going 11-9 through their first 20 games, the Knicks had dropped seven of their past nine games entering Saturday night’s showdown with the Celtics.

“I hate it,” Walker said of not being in the lineup the past few weeks. “I want to play.

“It is what it is. Guys went down. I got to fill in. Do what I can until they get back.”

Walker repeatedly credited Knicks associate head coach Johnnie Bryant for not only working him out over the past few weeks and keeping his body ready to go, but also keeping him ready to go mentally for whenever his number was called.

He also admitted it’s been a frustrating couple of years, beginning with the injuries that plagued him over his final year in Boston and now with his demotion in New York.

“It’s definitely been a rough couple years, to be honest,” Walker said. “But, you know, when you get a chance to kind of slow down and think about things, myself, you know, I think it’s just some adversity. At some point in life, everyone goes through tough times.

“I’ve had a great career thus far, and a lot of things went my way. It’s a tough time right now, so it’s really about just showing my character, showing who I really am. I’m so mentally tough, I feel like I’m built for any situation, and I’m going to handle it the best I can. I’ve got a great support system, great family, great friends who help me stay humble and stay grounded, and that’s what I’m going to continue to do. Just try to be unbreakable and continue to put my work in and just stay ready for anything that comes my way.”

For now, Walker’s spot in the rotation should remain secure. With the Knicks down several guards for at least the next few days due to being in the league’s health and safety protocols, it seems likely his time on the court will, at minimum, continue for the next couple of games — perhaps New York’s Christmas Day showdown with the Atlanta Hawks.

What happens after that, however, remains to be seen. Walker made it clear he hasn’t had much communication with Thibodeau on the matter, saying the two haven’t talked in recent weeks.

“Was I confused? No,” Walker said of the lack of communication with Thibodeau. “I’m not starting, I ain’t playing. So it is what it is.