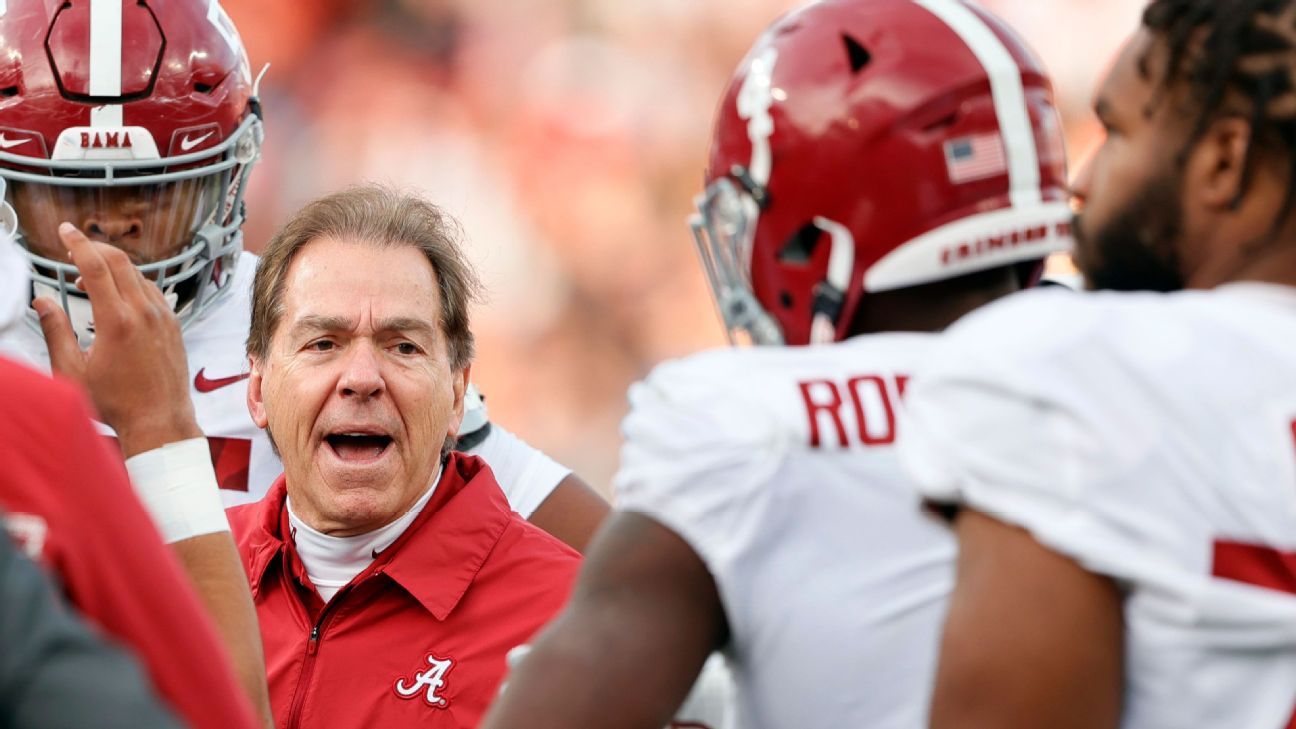 Nick Saban, vying for his seventh national championship at Alabama when the Crimson Tide face Georgia on Jan. 10 in the College Football Playoff title game, was noncommittal Monday when asked about playoff expansion.

“Look, I’m not the one who needs to be deciding what the playoff needs to be,” Saban said during his CFP virtual news conference. “There’s a lot of good people out there that can make a decision as to what’s best for college football. But the more we expand the playoff, the more we minimize the bowl games, the importance of bowl games, which I said when we went to [a four-team playoff]. So I don’t think that’s changed, and I also think it’s come to fruition.”

The CFP’s management committee, which is comprised of the 10 FBS commissioners and Notre Dame athletic director Jack Swarbrick, is expected to have another in-person meeting about expansion Saturday in Indianapolis, the site of this year’s national championship game. If they unanimously agree on a format, they could present it to the CFP’s board of managers, which consists of 11 presidents and chancellors who have the ultimate authority to change the playoff. They meet annually on the Monday morning of the title game.

Saturday’s meeting will be the management committee’s seventh in-person gathering since the CFP announced June 10 it was considering a 12-team proposal; that includes two meetings in Chicago and four more in Texas. While the majority of commissioners continue to favor a 12-team format, there continues to be debate about whether the Power 5 conference champions should receive automatic bids.

If the playoff is going to expand in time for the 2024 season, CFP executive director Bill Hancock has said repeatedly that a decision needs to be made by January. There would have to be unanimous agreement to change the format under the current contract because all 11 members of the board of managers signed the current deal, along with the CFP, ESPN and the bowls. If the playoff doesn’t expand until 2026, though, the commissioners have a blank slate and a new contractual agreement to work with that wouldn’t necessarily require unanimity.

There have been 16 semifinal games since the advent of the four-team playoff during the 2014 season, and 13 of those games have been decided by double figures, 12 games by at least 17 points.

Proponents for playoff expansion say expansion would give more teams a chance to win a national title and would create more competitive early-round games, although Saban doesn’t necessarily buy that last part.

“I don’t know that expanding … if these are the best four teams and they played each other, I don’t see the logic in it that if we had more teams there would be better games. I don’t know how that adds up,” said Saban, who has long been an advocate for the SEC playing nine league games instead of eight.

“But I am really not in a position to answer that. There are a lot of other good teams, whether it was their consistency in performance or whatever happened to them in championship games or whatever, that may have had the opportunity to get in the playoffs that didn’t.”

Cincinnati was the first Group of 5 team to make the playoff and lost 27-6 to Alabama on Friday in the semifinal at the Goodyear Cotton Bowl Classic. Michigan was also a first-time playoff participant this season and lost 34-11 to Georgia in the other semifinal at the Capital One Orange Bowl.

This season’s Alabama-Georgia matchup ensures that 12 of the past 16 national champions will have come from the SEC, and if Georgia wins, that would make it five different SEC schools winning national titles during that span.