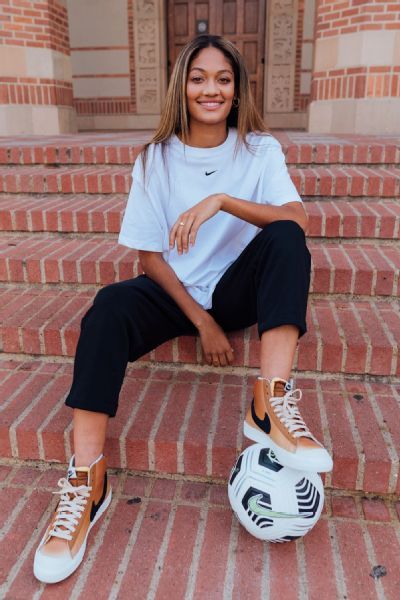 Terms of the deal were not disclosed. Nike said its agreement with college athletes “will include an element that connects back to their local communities.” Nike and Turner are expected to partner soon with a variety of Los Angeles-based nonprofit organizations to encourage young girls to be active and participate in sports.

“I’m so excited to be a part of what Nike is bringing to the future of women’s sport,” Turner said. “Picking up a ball opened so many doors for me. Playing sports has allowed me to build relationships with people around the world, to go to an amazing school, to be part of a community that means everything.”

The Pac-12 Freshman of the Year in 2020-21, Turner finished her sophomore season with 10 goals while helping UCLA to a 16-1-3 record. Her standout game came against Loyola Marymount in September, when she scored a hat trick in the first 36 minutes of play.

Born in Lakewood, California, and raised in nearby Aliso Viejo, Turner first had her sights set on attending UCLA after visiting the campus for a soccer camp as an 8-year-old.

Since the NCAA’s new NIL guidelines went into effect July 1, many of the initial sponsorship deals signed by college athletes have skewed toward national stars and players with a large social media following. Turner, 19, boasts just over 3,000 followers on her Instagram page, with Nike instead looking to champion her local connection to the Los Angeles community, diverse background and rise through the sport. Nike is expected to use her across the brand’s social media accounts and highlight her locally in the Los Angeles region.

“As an athlete, you’re in a position to be a role model, to have a platform to speak up for what you believe in,” she said. “I hope to be a role model for those around me and those after me. I want to inspire little girls and little boys to pursue their dreams too.”

The deal also syncs with UCLA’s recent switch from Under Armour to Nike. On July 1, 2020, Nike and UCLA entered into a six-year sponsorship agreement that has seen the Jordan Brand outfit the football and basketball teams, while Nike is outfitting the school’s other 22 teams, including soccer.

Turner’s agreement is the first direct athletic brand sponsorship of its kind. UConn basketball stars Paige Bueckers and Azzi Fudd were among the first to land unique NIL deals venturing into the athletic space. Bueckers signed a multiyear deal with sneaker and apparel marketplace StockX. Fudd inked a multiyear partnership with Stephen Curry’s SC30 Inc. that will eventually align her with the Golden State Warriors star’s brand partners, investment vehicles and media production company, among other outlets.

“As a Black woman and Mexican American, I think about those who have paved the way for me and how they used their platforms to create so much change, even beyond sport,” Turner said. “I hope to be a role model for those around me and those after me.”