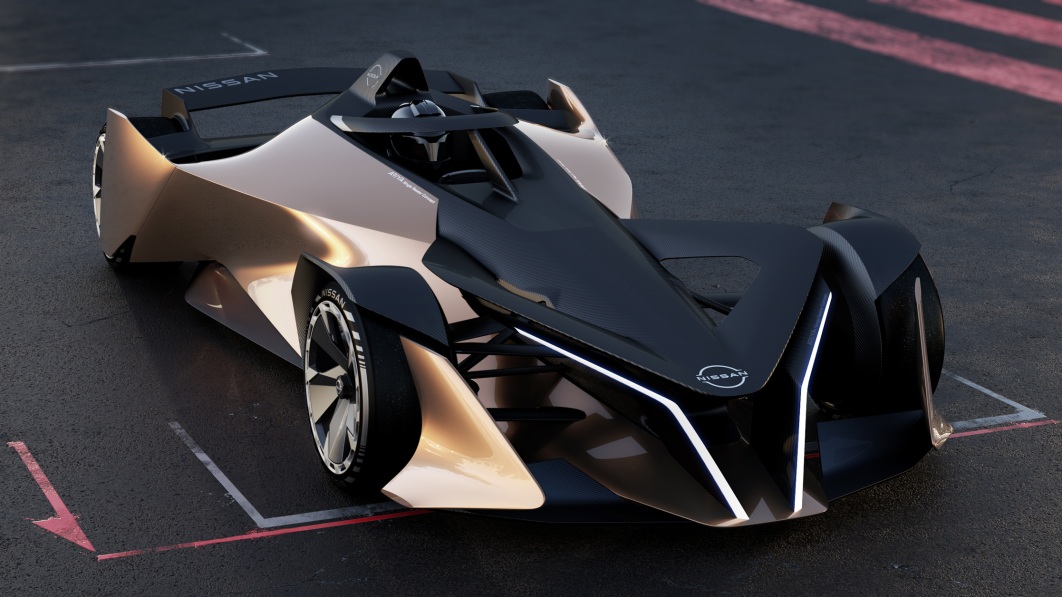 Nissan has big near-term plans recently laid out in the Ambition 2030 initiative that prioritize technology, sustainability, and excitement over global volume. The automaker has its new Ariya EV on the way next year, bearing a new powertrain and a new design language. It’s also about to enter its fourth season in the Formula E World Championship racing series, taking over from sister-brand Renault so the latter could focus on Formula 1. Nissan SVP of global design Alfonso Albaisa and his team put all that into a blender, and out sprang the Ariya single-seater concept, which puts the coming crossover’s powertrain into a carbon-fiber-heavy racing chassis.

The concept’s stark V-Motion grille is the clearest connection to the road-going CUV, but there’s resemblance throughout, as if the designers decided to give the Ariya its Boss Fight Final Form. The company talks like there is more here than merely a rendering presented at the Nissan Futures event in Yokohama, Japan. The press release mentioned this digital exercise becoming “a testbed for future technological evolution” that “can help bring excitement from road to track.”

If that happens, part of that excitement could be the new design language. Albaisa explained the philosophy as coming from the Japanese words “shun” and “sho,” the former meaning to run fast and effortlessly, the latter meaning to soar with power and grace.

Before we find out how that could look on a retail model, we’ll have the 2023 Ariya as our first experience of Nissan’s (hopefully) bolder future. First deliveries begin next autumn, the entry-level Ariya Venture the most accessible of four trims, starting at $47,950. It packs an 87-kWh battery powering a single e-motor with 238 horsepower and 221 pound-feet of torque that turns the front axle for up to an estimated 300 miles. At the other end, the Ariya Platinum+ with e-4ORCE all-wheel drive uses the same battery to spin two motors putting out a combined 389 hp and 442 lb-ft of torque for up to 265 miles, its MSRP $60,125.

Previous articlePlanning your next move: Assess your skills and value in this volatile job market
Next articleNorton V4 Cafe Racer prototype superbike serves up 185 hp