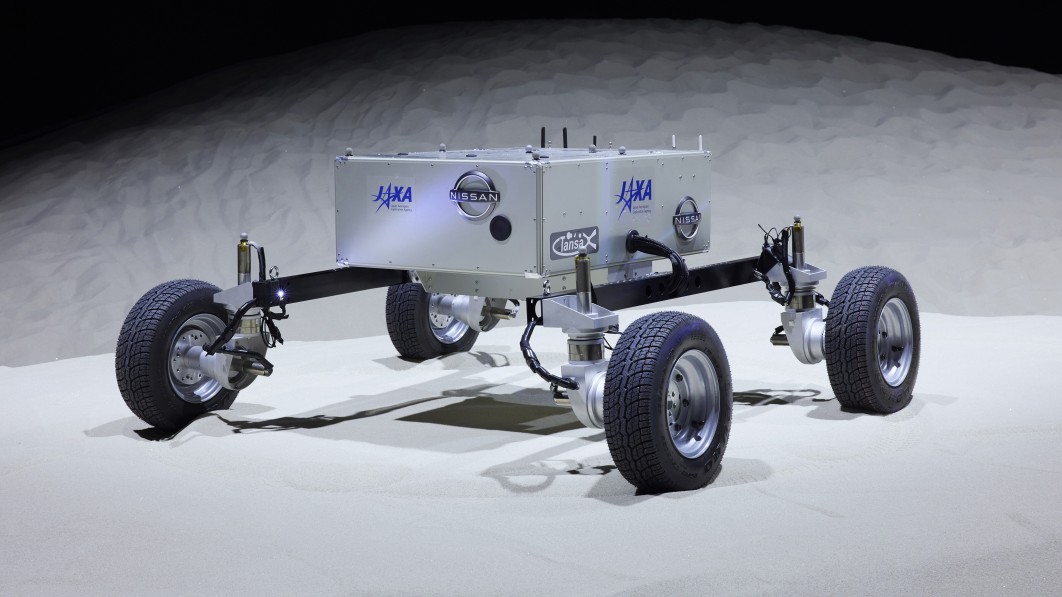 Say hello to the Nissan lunar rover prototype. Jointly developed with Japan Aerospace Exploration Agency, this rover is the result of nearly two years of work. It may look like a simple box on a frame with four wheels attached, but this simple box on a frame is designed to function in places like the moon.

Nissan’s contribution to the project is its implementation of the company’s e-4ORCE all-wheel control technology. We sampled this tech on a Nissan vehicle a couple of years ago, and now those learnings are being applied to make a lunar rover more capable of traversing a planet’s surface. The main focus was improving performance in sandy conditions, but Nissan says it’s also accounting for the moon’s powdery, rocky and undulating terrain. Basically, it’s Nissan’s job to make sure the rover doesn’t get stuck. Additionally, Nissan is helping to ensure the rover’s power is doled out as efficiently as possible, because energy sources for operating such a vehicle in space are extremely limited.

“The uses of automobiles and driving situations are wide-ranging,” says Toshiyuki Nakajima, GM of Nissan’s Advanced Vehicle Engineering Department. “We aim for the ultimate driving performance through our research and development, and believe the knowhow gained from this joint research with JAXA will lead to innovations in our vehicles that will bring benefits to customers.”

Nissan has already touted its e-4ORCE driving system in the upcoming electric Ariya. It’s great to see that engineering for space could ultimately trickle down to cars the general public gets to drive, no matter how small the impact. Plus, we can all hope that Nissan’s technologies today help us get further and learn more about space.

“By conducting research with Nissan, which has expertise in electrified technologies, we hope to apply our findings to the development of higher-performance lunar rovers,” says Ikkoh Funaki, JAXA Director of the Space Exploration Innovation Hub Center.