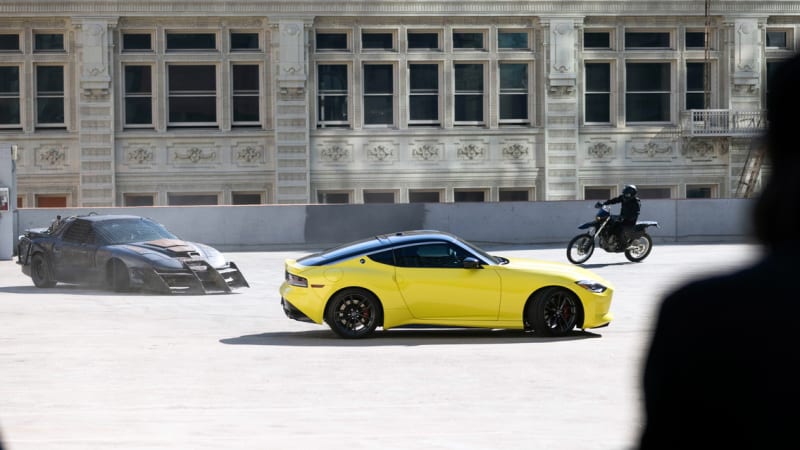 It’s that time of year again: time for Super Bowl commercials. And one of the first out of the gate is Nissan. The company has chosen to show off the 2023 Nissan Z and electric Ariya in a star-studded ad, but it leaves us wishing for Z commercials of the past.

It kicks off with Brie Larson arriving on set in a Z. Eugene Levy spots her and the car, and is impressed by the Z. Larson offers the keys for a spin, and the mild-mannered Canadian is reluctant to drive something so sporty. But he tries it, takes off, has an awkward first shift, but starts to enjoy it, and also drives past Catherine O’Hara. Later, Dave Bautista and Danai Gurira see him, and they take off after him. Suddenly, everything turns into a big-budget action flick with a long-haired Levy at the wheel. It turns out it was an action movie everyone in the commercial put together.

It’s… fine. There wasn’t anything terrible, but it didn’t really seem like it took that much advantage of any of the actors’ talents from Levy’s comedy to Bautista’s and Gurira’s action experience. And it wasn’t amazing from a product standpoint either. It says the Z is exciting, and does that fine, but arguably the more important product for Nissan, the Ariya, is basically used as a generic car, rather than highlighting it as a potentially stylish and interesting electric car.

And it’s made worse by the fact that there have been some truly fantastic Nissan Z commercials, particularly ads for the 300ZX, which inspired the new Z’s rear design. We’ve highlighted two of our favorites. Above is an ad that was done by Ridley Scott, and it channels his sci-fi experience from “Alien” and “Blade Runner.” It shows a man running across a dystopian landscape outrunning futuristic vehicles. It’s simple, elegant and hammers home the performance aspect of the twin-turbo 300ZX. Below is a more amusing ad where an action figure has an exciting drive through a house with a remote control 300ZX and is joined by a doll. It also has a fun cameo from Yutaka Katayama, also known as Mr. K, who is known as the man who gave us the Z.

All we’re saying is, we think Nissan can do better in the ad department. Heck, maybe a remake of one of these classics is in order. Remakes are all the rage in Hollywood.