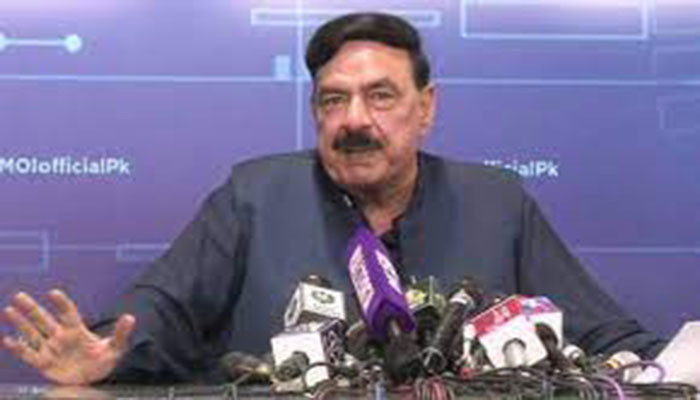 ISLAMABAD: Federal Interior Minister Sheikh Rashid Ahmed on Tuesday said that no caretaker setup was coming as the present PTI government would complete its constitutional term.

He said there was no threat to Prime Minister Imran Khan’s government, he will complete its constitutional term and would strengthen democratic system. Sheikh Rashid said that inflation would decrease in coming months in line with the directions of Prime Minister Imran Khan. He called the decision of the Pakistan Democratic Movement (PDM) to announce a long march on March 23, Pakistan Day, is an “extremely irresponsible and immoral” move.

Rashid was talking about PDM chief Maulana Fazlur Rehman’s statement in which he announced the opposition alliance will hold an ‘anti-inflation march’ in Islamabad on March 23. “On March 23 (Pakistan Day), Pakistan’s armed forces hold a national parade which is attended by citizens, ambassadors and various delegates,” he said in a series of tweets, reported Geo News.

“The federal capital is put on high alert for preparations of the parade. Even some roads are barricaded two to three days in advance,” he added. The minister urged the PDM to call off their protest on March 23, insisting them to shift it to April instead.

Promoting Pakistan Day as a day of protest, chaos and disturbance is tantamount to serving anti-state forces, he added.

The minister said if the opposition did not change the date then it should not blame the government for not allowing them to hold protest as Islamabad would be on high alert for the parade with closure of some roads for two to three days in advance for parade rehearsal.

He said Fazlur Rehman should not drag seminary students in the politics and use them as a tool to achieve agenda of those who have already lost popularity among the masses. He said the government would be able to control inflation in the coming months in line with the directions of Prime Minister Imran Khan.

He appealed the media houses to play its due role to counter extremism, adding it should not give coverage to people involved in such activities. Commenting on the NA-133 by-election, Rashid said the PMLN candidate secured only 10 percent votes as they could not be fool the people any more. To a question, he said the prime minister had convened a detailed meeting on Sialkot incident and directed to take stringent measures as per law.